How to relax in Zanzibar? Well, let me start by saying it’s not hard. 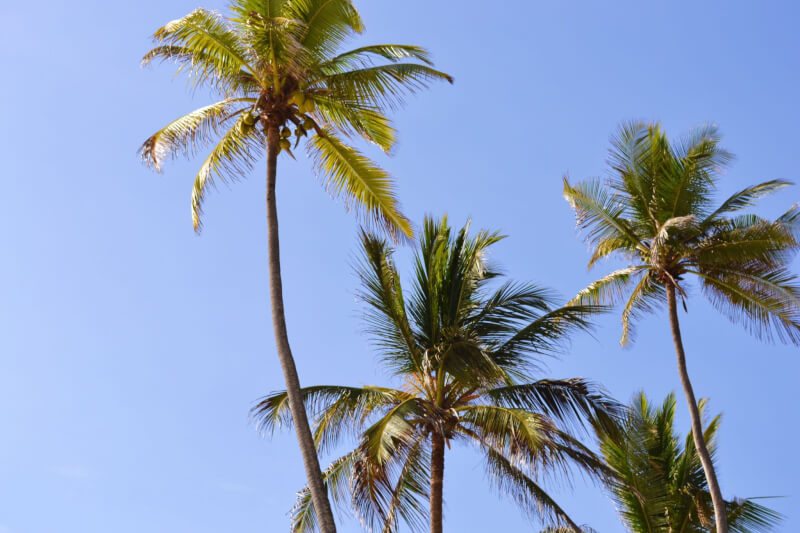 When thinking of paradise, think no further than Zanzibar. The quintessential azure blue seas, golden beaches and plenty of places to relax, this is a dream location. Many safaris are combined with a trip to a slice of African paradise, and Zanzibar provided just that after five days of safari in the Selous. It really was a little piece of heaven, and provided the most relaxing few days. 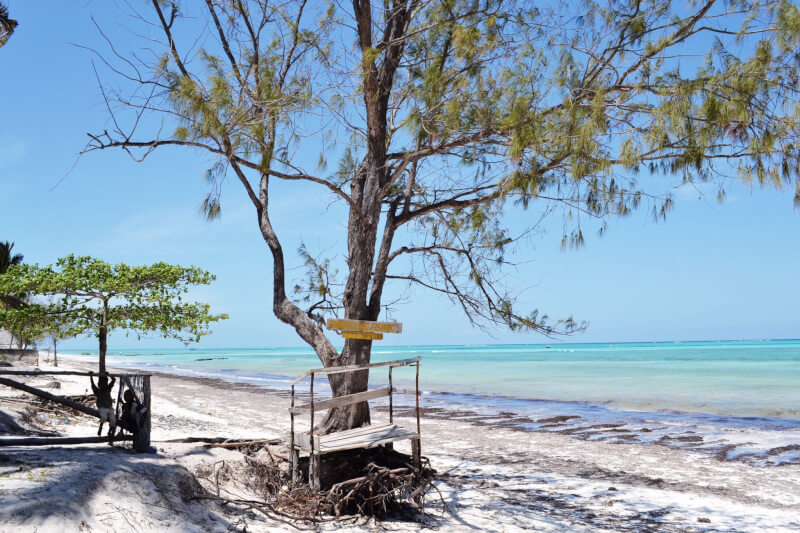 From the Selous game reserve we caught another little aircraft back to the main airport in Tanzania, Dar Es Salaam. There isn’t a huge amount to do in Dar Es Salaam airport, particularly in the domestic terminal. So I would recommend trying to time your flights to not have too long to wait. As I was travelling with my family it was quite the task to keep my brothers (then aged 4 and 7) entertained. From Dar Es Salaam to Zanzibar it was an identical 12 seater plane out to the island. We landed into the international airport of Zanzibar in the capital, Stone Town, before heading out to our first hotel of the island.

We had decided to book a driver for the day in advance, who met us on arrival. This meant we could head into Stone Town and explore a little bit before going out to the first of our two hotels on the coast. Having our own driver and vehicle meant we could leave our suitcases in the car and got to see a little more of the island.

The capital of Zanzibar. When I visited, back in 2013 now, it had a bit of a bad reputation due to the number of incidents that had occurred there. We were a little wary, but it didn’t feel worthy of the reputation it had received. I think, as with any places, take sensible precautions and you will be fine. I wouldn’t recommend walking around at night however. 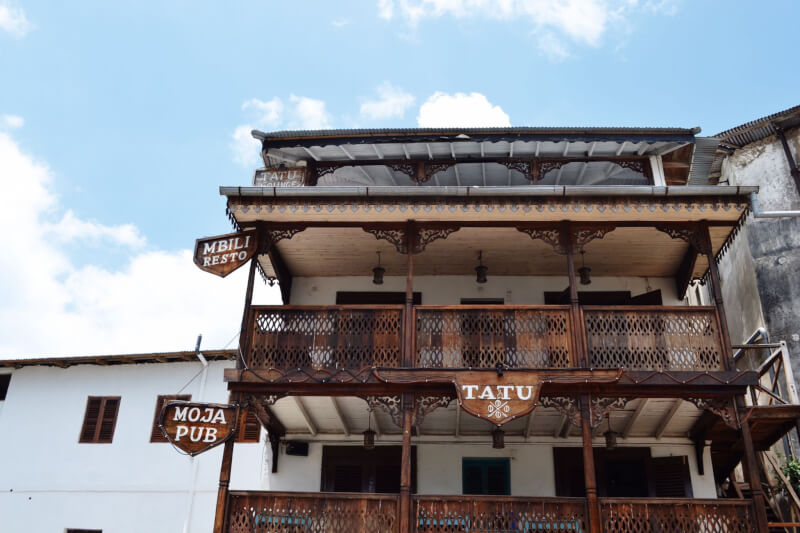 First we stopped to have some lunch at a restaurant with a lovely terrace overlooking the ocean. Travellers Café was perfect for a casual lunch spot, with some epic views. I imagine it was also be an amazing place to eat if you wanted to watch the sunset over the sea. 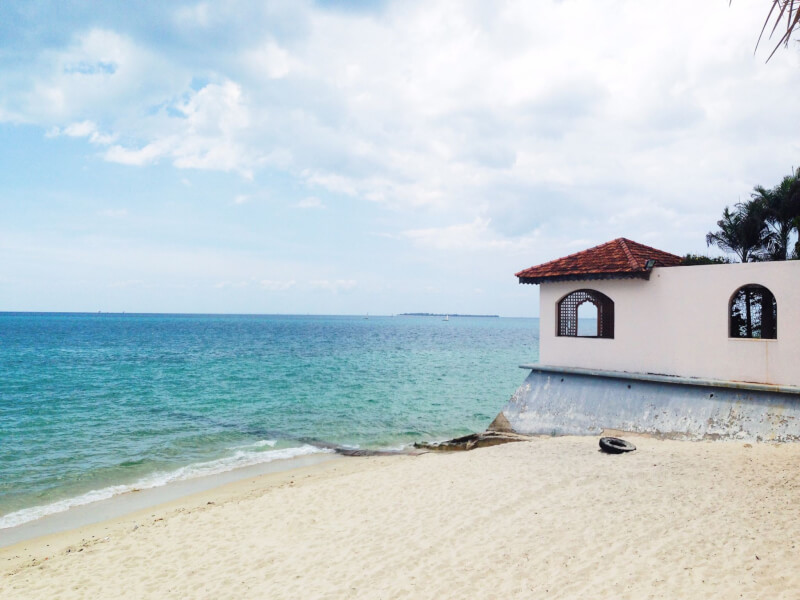 After lunch we set off on foot to explore the streets and visit some of the shops. We decided not to see any of the ‘sights’ but had a lovely time wandering around and getting a feel of the town. If you are short on time I think an afternoon is enough time to spend here. Obviously there is so much to see,  but we had come to Zanzibar for a more relaxing, beach type break – so were keen to head to the hotel for sundowners. 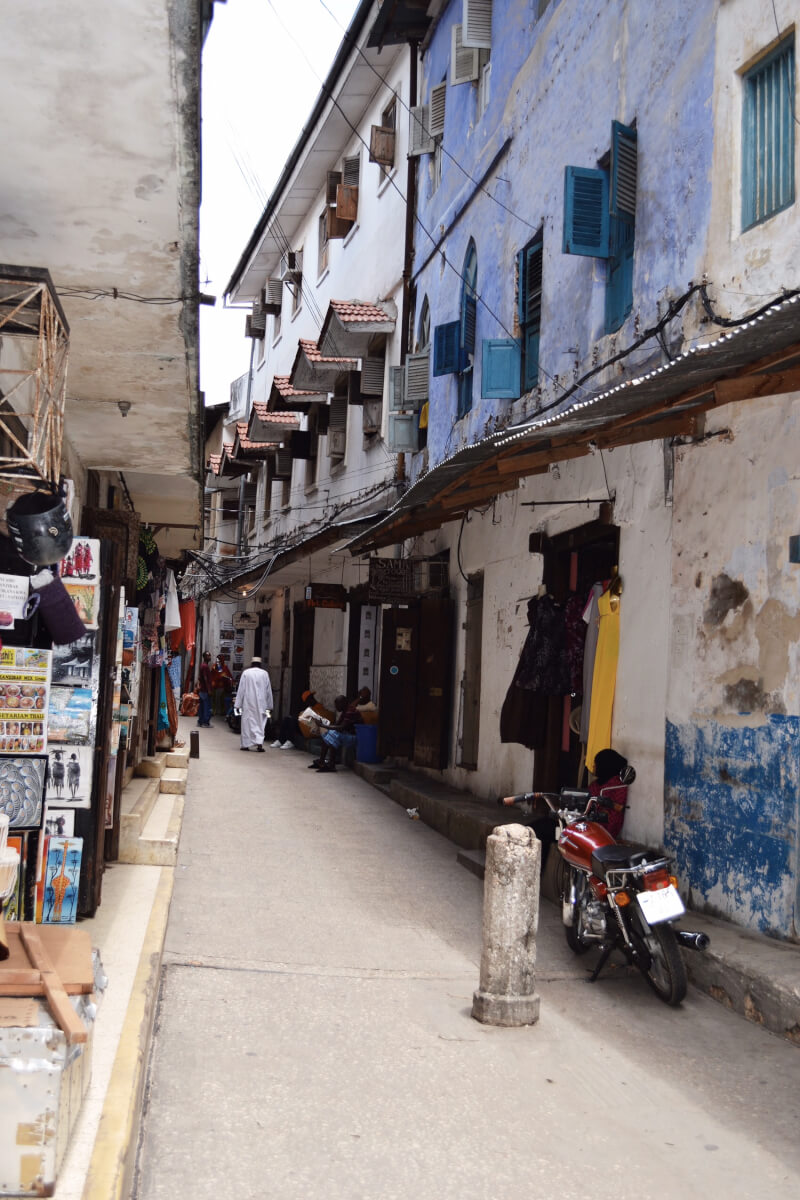 We had decided to split our 8 days in Zanzibar between two hotels, on different parts of the island. For the first 4 days we stayed in the lovely Matemwe Beach Village, located on the North East coast. This hotel had such a laid back, chilled vibe. There was a no shoe policy which I fully embraced! It was the more basic of the two places we stayed and I actually enjoyed it more. 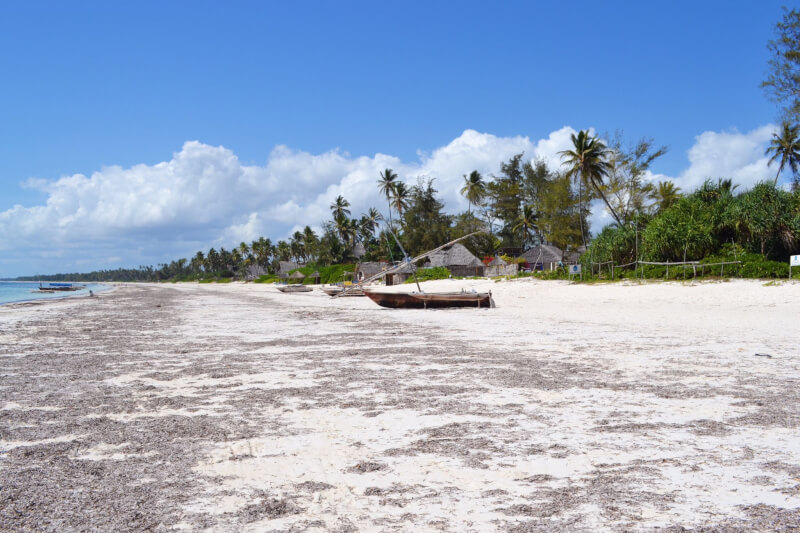 There was a lovely bar area, with huge benches covered in cushions. Absolutely perfect for relaxing with a cocktail. There were two restaurants, the first one being in the bar area. The other was inside an enclosed circle made of huge walls of bamboo. Lit by burning torches and a delicious buffet. Very atmospheric, dining under the stairs with bare feet wriggling in the sand.

The rooms were simple and cool. But full of lovely little touches. There were wicker hats and bags you could use during your stay. As well as greeting of ‘Karibu’ (Swahili for welcome) written in a little sand box when we arrived. 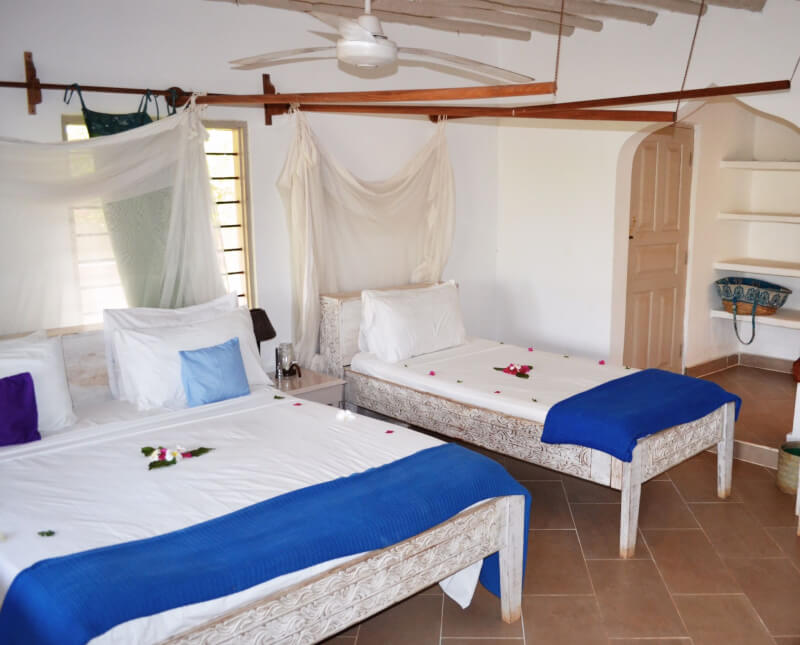 Add to this the two pools, selection of randomly placed hammocks in the shade and the second cocktail bar – it was heaven.

The beach was so quiet, even though it wasn’t a private beach, and it felt like we had the place to ourselves. It is said to have some of the best sand on the island. There were traditional looking sun loungers, some on the beach itself. There were also others, set slightly back almost in the undergrowth but in a clearing under the shade of wooden shelters. It was so idyllic relaxing among the trees and watching the sea through the swaying palm leaves. 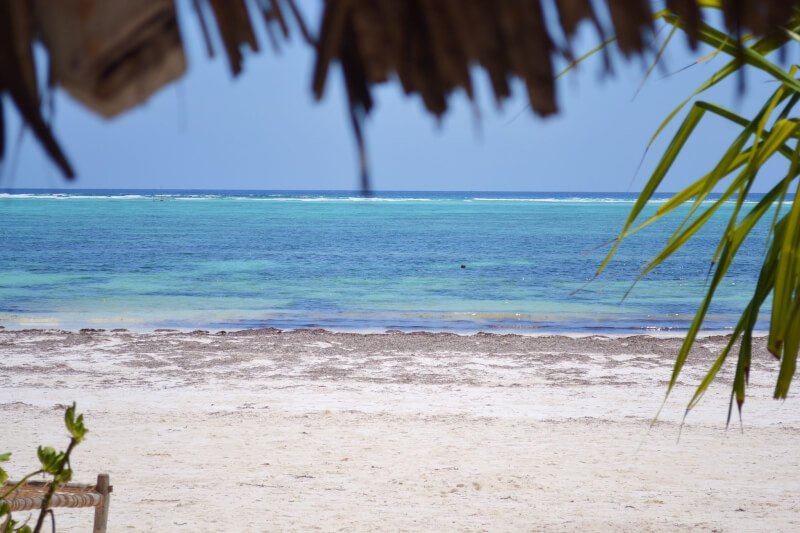 The hotel also arranged a tour of the local village for us. It was so lovely to be able to have a walk around and meet some of the locals. Our guide said how the edge of the island, on the coast is full of hotels and luxury. However, the island and the locals who live in the centre are quite poor. Zanzibar is a Muslim island, so when leaving any resorts make sure your shoulders and knees are covered. 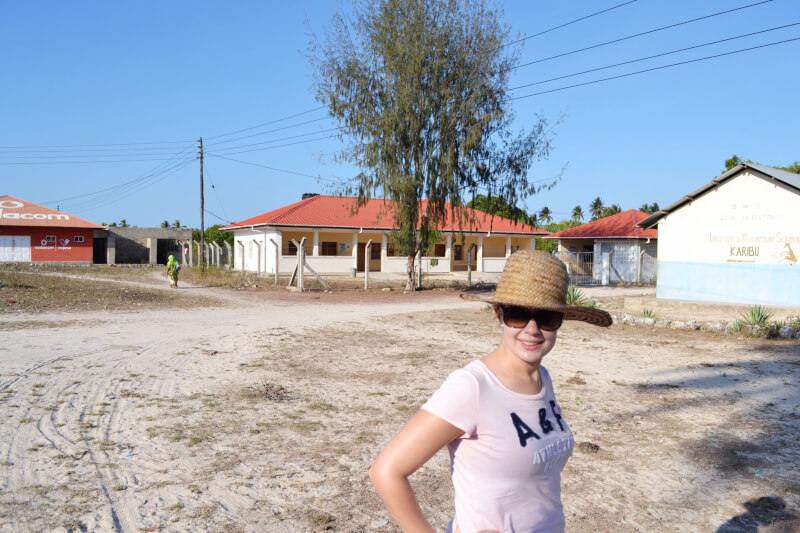 We saw the local school, shops and also met some women who make jewellery for the tourists. We purchased some bracelets and anklets, which made for a lovely souvenir. 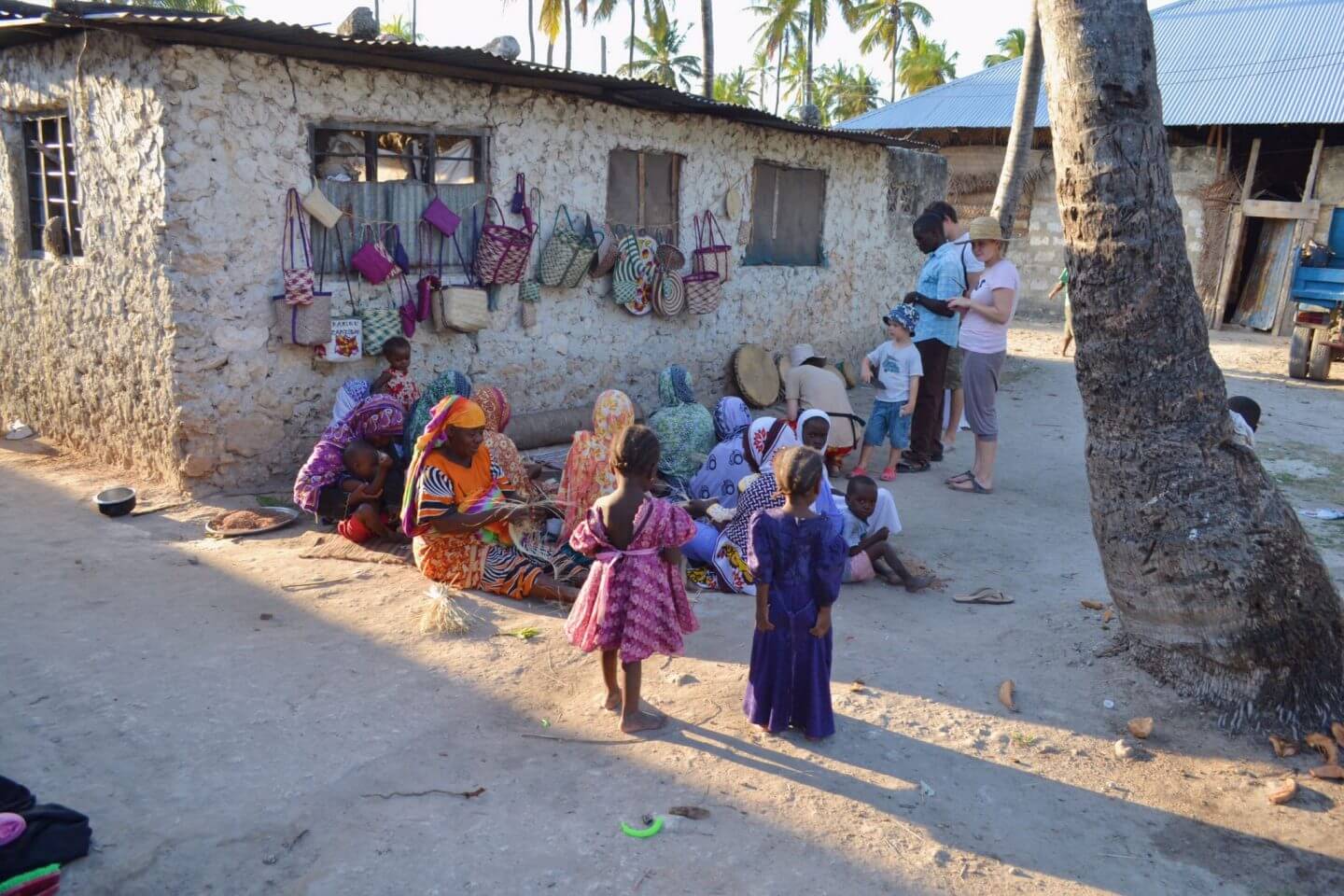 One day we also were taken out on a local sailing boat, made from wood. Quite the authentic experience. They provided us with snorkels and fins and spent a lovely afternoon snorkelling alongside the boat. Other activities included Reef walking, where we went out to see some of the local sea life. They also offer kayaking, diving and snorkelling.

Our second hotel was on the East Coast of Zanzibar, right in the middle. This was more upmarket and larger. Meals were served buffet style every meal, from breakfast and dinner in the large restaurant area. There was also a smaller restaurant located near the pool which served more snack type lunches. 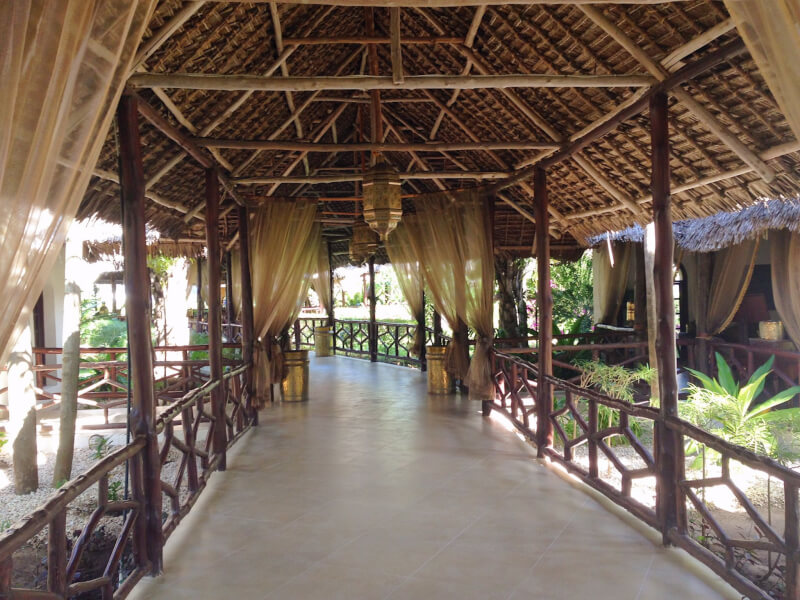 For those who are after something romantic, they offered tables on the beach for private dinners. I did not partake in this.

There was a lovely large pool to relax near, as well as access to the private beach. 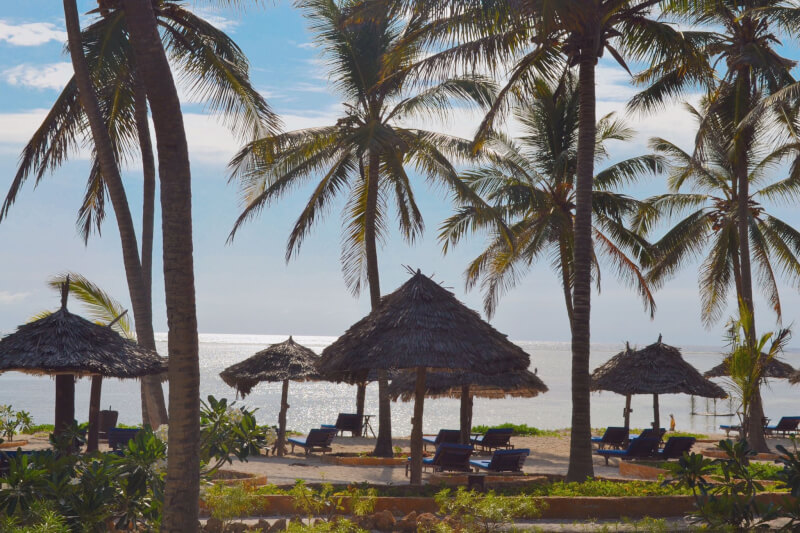 Afternoon tea was served near the beach and had lots of delicious treats and teas to tide you over to dinner.

There were also had sailing facilities, right next to the hotel. I spent a lovely couple of afternoons reminding myself how to sail a catamaran. What a perfect setting in which to do it in! My brother also took out a windsurf.

The rooms were spacious, and only a short walk to the restaurants. Lots of communal areas for relaxing it as well as entertainment in the evenings. 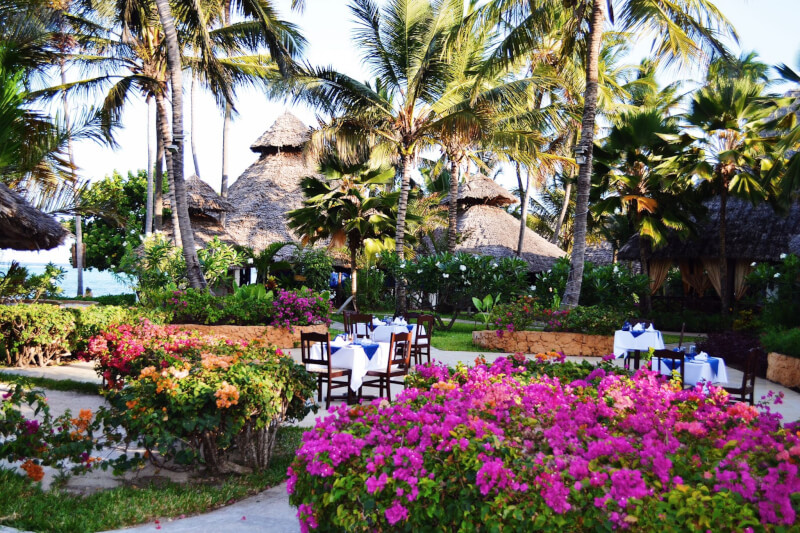 This was a lovely hotel, absolutely beautiful, with lots of facilities. However, as I said I actually preferred the laid back, chilled vibe of our first hotel. It just suited me more.

Warrating of it’s own special section in this post. I have never, and don’t think I will ever again, eat in a restaurant in a more beautiful setting, in fact Bookatable list it in their worlds most amazing restaurants with a view. 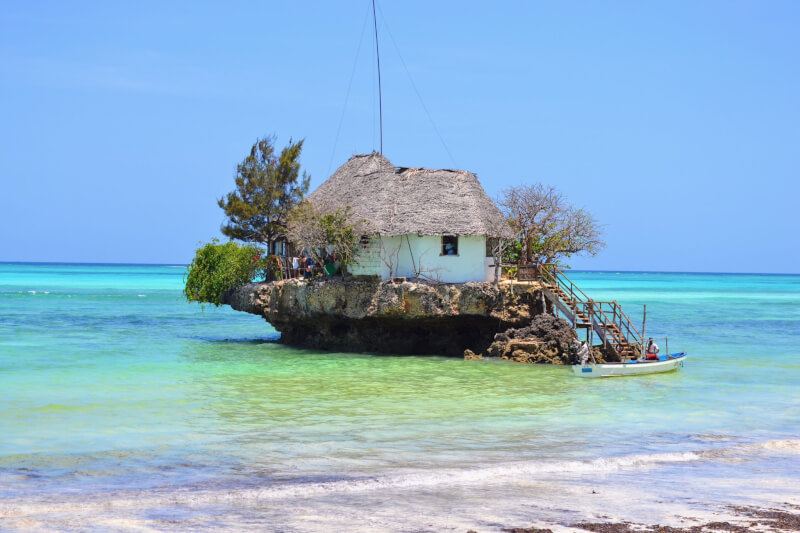 This is undoubtably the best restaurant in Zanzibar. Not that I tried them all,  but I really think it would be hard pushed to find somewhere to beat it.

The taxi pulled up and we walked down towards the beautiful golden sea beach and gazed out over the sparkling blue sea. Just ahead is the restaurant perched on the side of the small rock, with steps leading down towards the water. 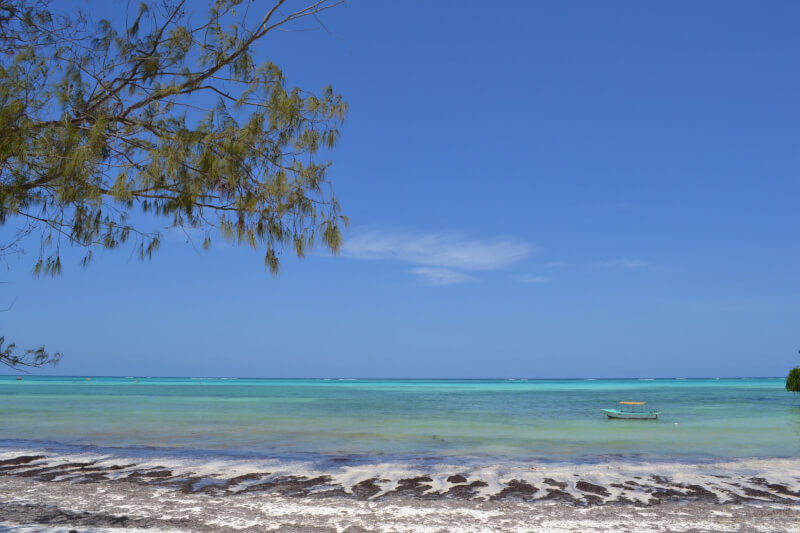 At low tide you can walk across to the restaurant, at high tide you are taken by boat. And it is quite literally sitting on a rock in the sea. And what sea, azure blue seas as far as the eye can see. 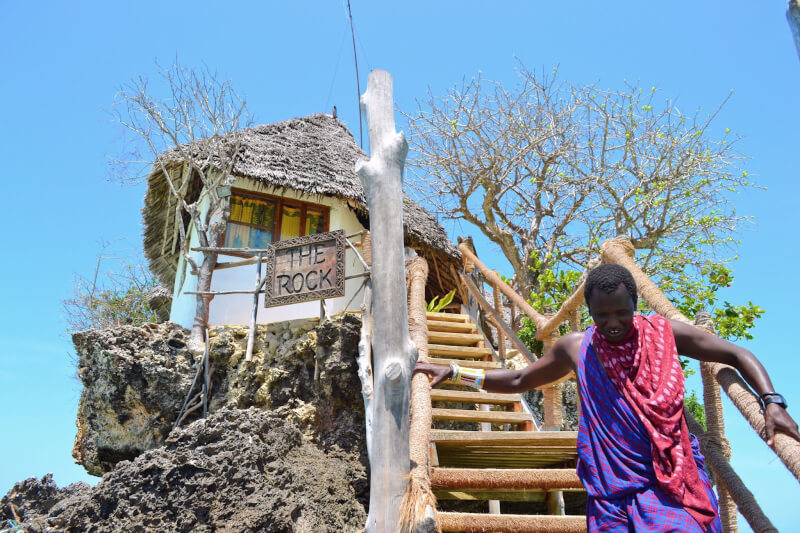 Sit out on the terrace, with drink in your hand, gentle breeze flowing through your hair. I dare you to find a more idyllic setting for a meal. 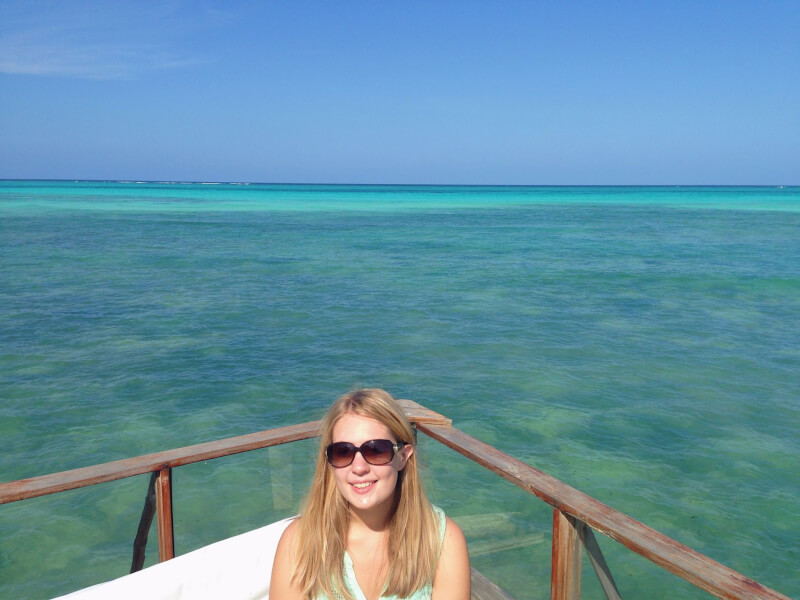 The menu is mostly seafood, which was a small challenge for me, but the setting more than made up for it. Plus they served delectable chocolate mousse for pudding, which is always a win.

One of the most amazing things we did in Zanzibar was going to swim with the dolphins in the wild. Booked through the Matemwe Beach village, we were picked up from the hotel and taken out to catch the boat.

Once on board you are provided with a snorkel mask and flippers. The boat then races out towards the deeper ocean in the hope of finding a pod of dolphins.

It is quite a hectic, stressful experience but so worth it. You wait until the dolphins swim close, then are yelled at to quickly jump in the water. The dolphins are swimming just below and around you. You swim as fast and as hard as you can for as long as you. But it won’t be long before the dolphins outpace you. So quickly scramble back into the boat before trying it all over again.

The masks often fall off and water goes up your nose, in your eyes, but when you finally get it right. That experience lasts forever. 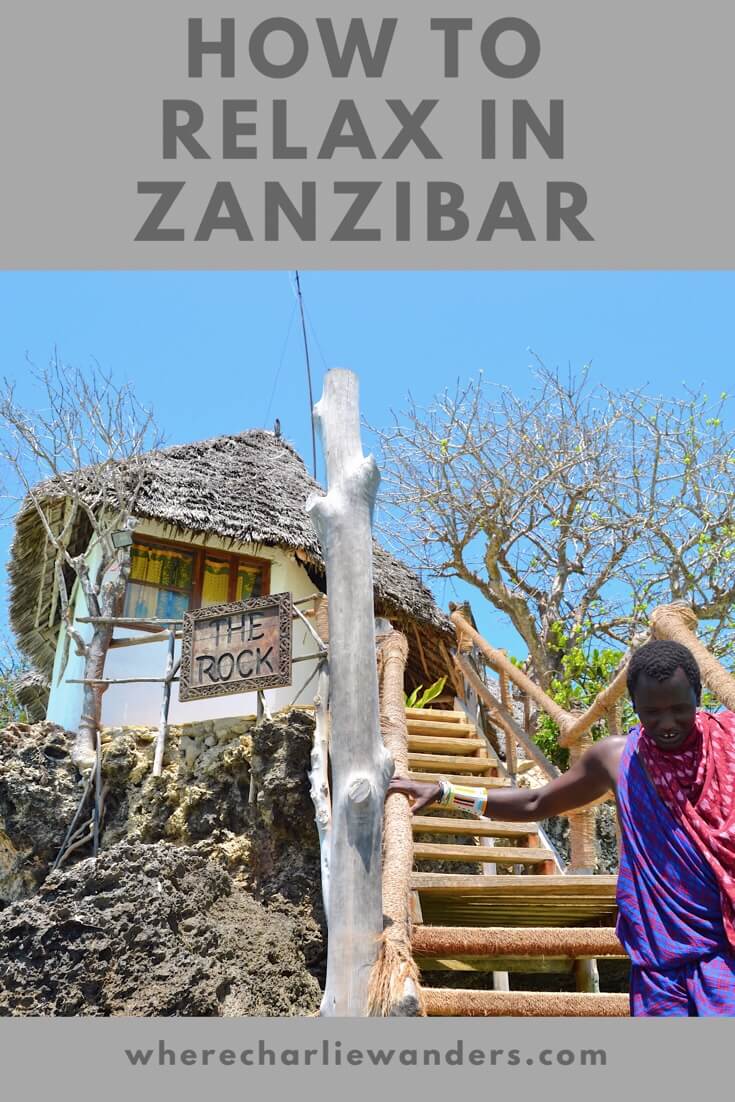 Thank you! Insane is the best way to describe kt!