I have been so lucky to see some incredibly beautiful, and rare, wildlife in their natural habitat.

So here are my top wildlife in the wild moments

There was no other wildlife experience I could start with. It’s probably the only moment in my life I have actually been speechless. There are so few of these animals left in the wild and none whatsoever in zoos (any gorillas in zoos are lowland gorillas). 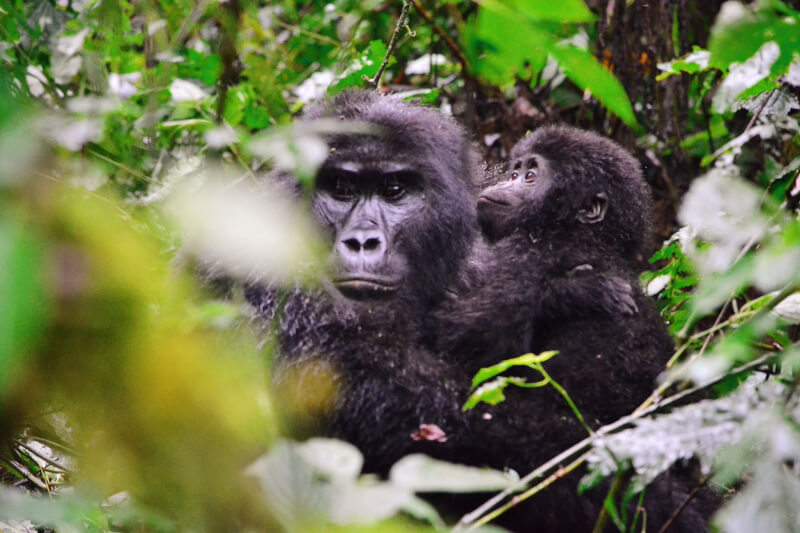 There are two populations in Africa. One covering parts of Uganda, Rwanda and the Democratic Republic of Congo. The other live in Bwindi National Forest which is where I headed. The permit to trek is cheaper here at $600 ( less in off season). 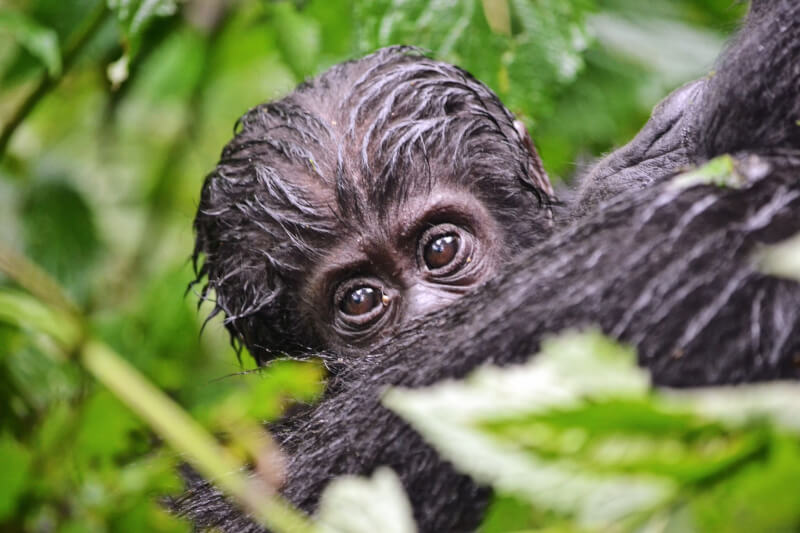 A portion of the money you spend on the permit goes back into the conservation of these animals. Equally hiring locals for porters etc is providing employment for the local community. One of the biggest threats to the mountain gorillas is human encroachment onto their habitat. By providing other ways of income for the locals, this is happening less.

For more details on gorilla trekking in Uganda, read my post here.

I’m not sure how much people have heard of Przewalski’s horses, but they are the only truly wild breed of horses, having never been domesticated by humans.

They live on the Steppe of Mongolia, in Hustai National Park. Towards the end of my tour in Mongolia, I arrived here. We had an initial briefing, and then set off in our trusted overland vehicles.

Eyes peeled, binoculars at the ready and everything crossed. I knew it wasn’t a dead cert we would be able to see them, so I was hoping!

About half an hour into the drive through the park we spotted four on the ridge of a hill. But our guide was confident we could do better. And he was right. 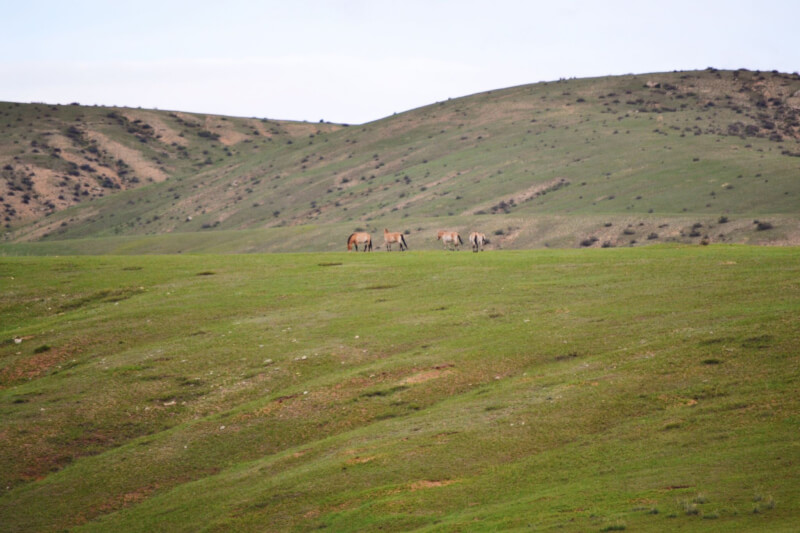 With eyes better than an eagle, he spotted some later on in the distance. We were able to leave the cars and embark on a small hike to get closer. 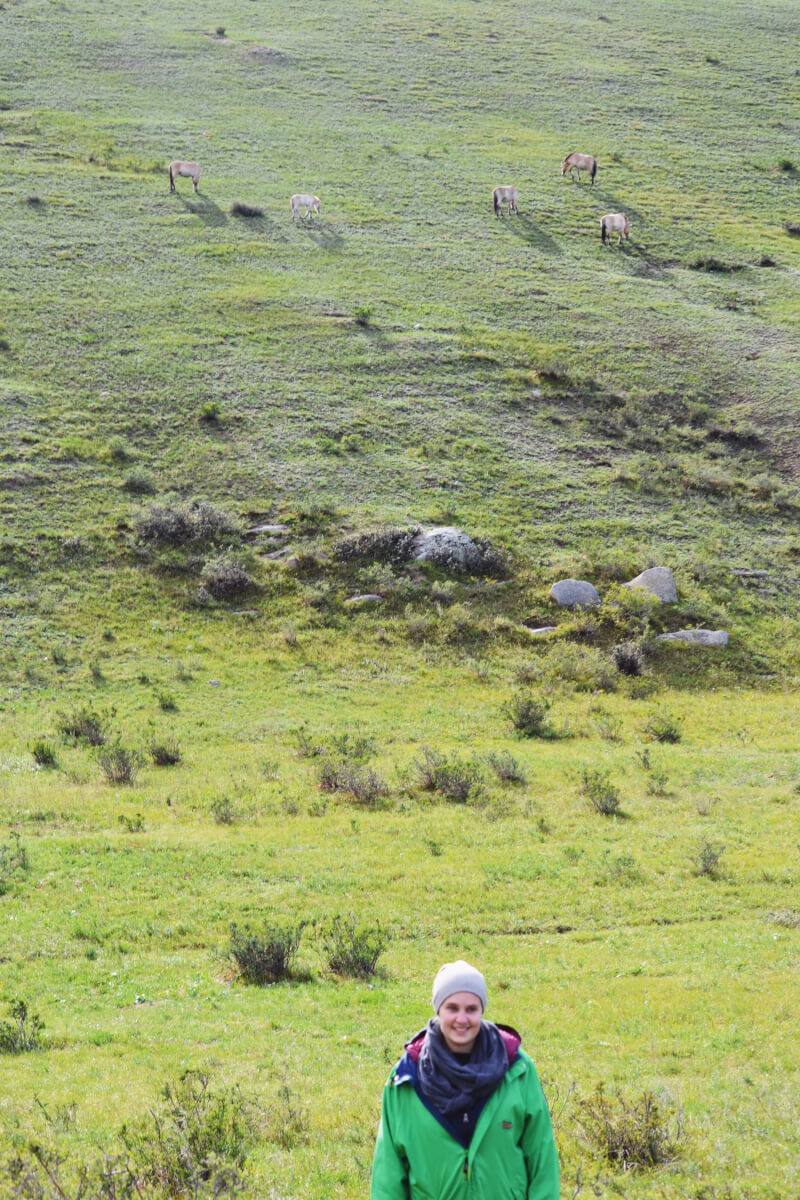 From a vantage point on the hill opposite we paused to watch these incredibly special animals. Two of the stallions started fighting, and I felt like I was living in a David Attenborough programme. Seeing how these animals behave in the wild, felt like such a privilege to witness. 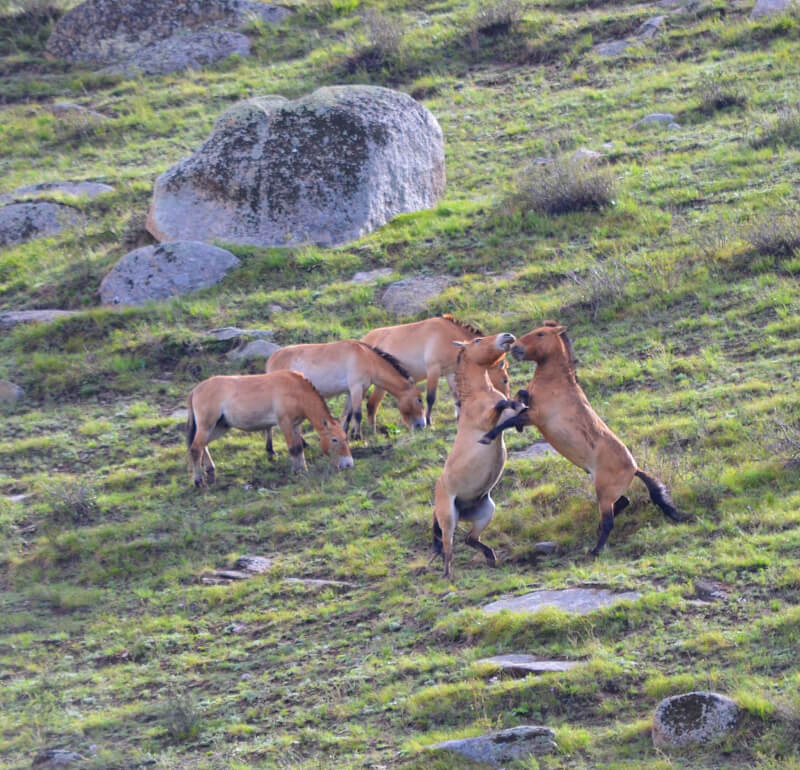 Such a hush fell across the group as we realised just what a privilege it was to be in the presence of these horses. So close to being wiped out from our planet, and yet here they were in front of us. Living proof the power of these breeding programmes.

While in Uganda I also got the chance to go trekking in the Kalinzu forest to visit a family of chimps. They were actually harder to spot than the gorillas. We did get to see a male, as well as a mother and her baby and two further males. The most amazing part was the noise of their call. The hairs stood up on the back of my neck. While I couldn’t see them, the noise was so loud. 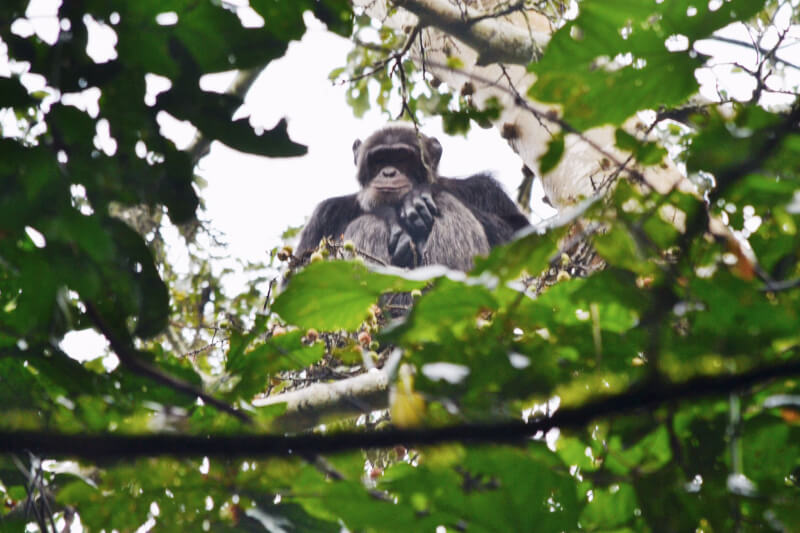 Our guide was very specific about where we could stand and how long we could spend looking at the chimps once we arrived. Absolutely no flash photography allowed.

At the beginning of our day tour around Nairobi (read more about this here), our guide asked me which animal I most wanted to see in Nairobi National Park. Without pausing for breath I emphatically replied, a rhino. I had been on safari before, but there were no Rhinos in the Selous, so this was to be my first chance.

Within only 15 minutes or so of arriving in Nairobi National Park, he succeeded. There in the distance was not just one rhino, but a mother and her baby. To say I was excited would be an understatement. I’m not even sure what noise I emitted. 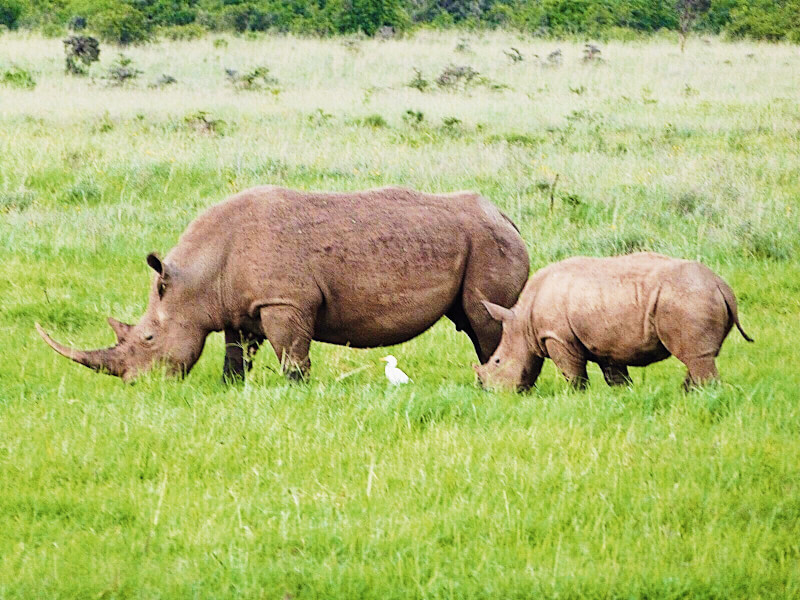 I kept my eye glued so firmly to my binoculars, I had to be dragged away. It actually wasn’t to hard for them, we were in a safari jeep after all. The driver just had to put his foot down. But I was lucky. As we were leaving the park we had another sighting. 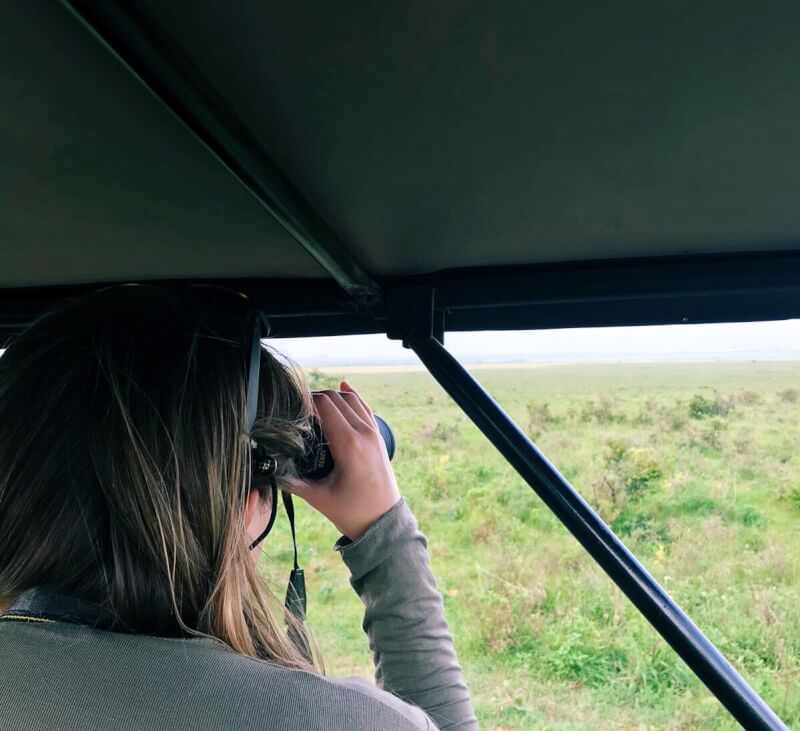 My first and last wildlife sighting in Nairobi National Park was a wild rhino. I think it was meant to be.

All of safari in the Selous was amazing. It was tricky to pick one animal as my top wildlife moment from this trip. I saw lions, zebras, water buffalo, giraffes and even the very rare African dog. But, seeing the elephants seems to have clinched it.  Firstly, they are just so big. Seeing them in their natural habitat makes them seem even larger, bizarrely. 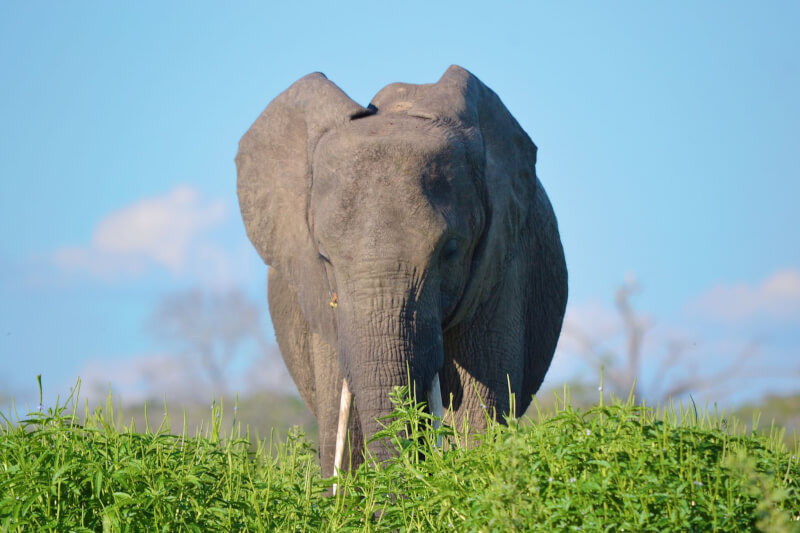 But it was the setting and the moment that made it so special. We boarded a boat from the jetty in our camp and began meandering our way down the Rufji river. Along the way we had various sightings of hippos, crocodiles and the like. The boat then started dawdling, not going anywhere. Before long our guide pointed to the bank and an elephant was just visible in the undergrowth. This animal soon emerged, followed by the rest of the herd. They ambled their way to the river bank and soon all were in the water. 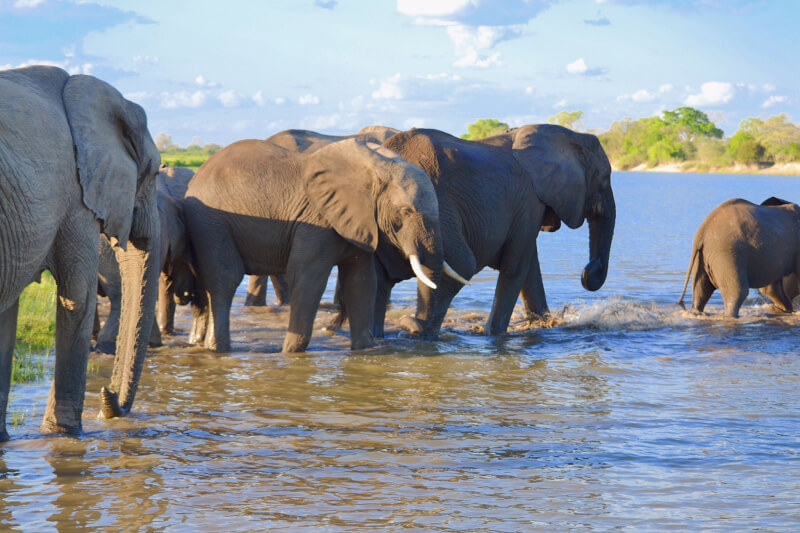 Every morning and evening the elephants cross the river to feed on the other side. We were so close to them, I felt like I couldn’t breathe. The world was momentarily paused as these magnificent animals crossed mere metres in front of us. The Matriarch of the group stayed closest to the boat, no doubt to protect the young if need arose.

Quite unlike any other experience before, and definitely a moment that will remain etched in my memory.

This one only just counts. I know Costa Rica is famed for it’s sloth population, but I only just about saw one and I definitely didn’t get the chance to get a photo.

We were on a tour of a coffee plantation in Monteverde in the pouring rain. By far the highlight was spotting a sloth chilling in one of the trees. The poor tour guide immediately lost the interest of his entire group as we all tried to see the sloth.

I did manage to catch a glimpse, but I don’t think it can go down as a famed sighting.

A wildlife sighting a little bit closer to home, and one I am lucky to have seen on multiple occasions.

Blakeney point in North Norfolk is home to a colony of seals, comprising both the grey and the common seal. Bizarrely however, the common seal is actually less common in British seas, than the grey seal. Not endangered, but both species are protected by the Conservation of Seals Act (1970).

If you go in the winter you can see the seal pups and in the summer see them all basking on the shore. I am lucky, as my family have a boat. So we often go out from Morston Quay and can take the boat to go and glimpse these beautiful animals relaxing on Blakeney point. It is also great fun to try and spot them as they pop up in the sea next to the boat. 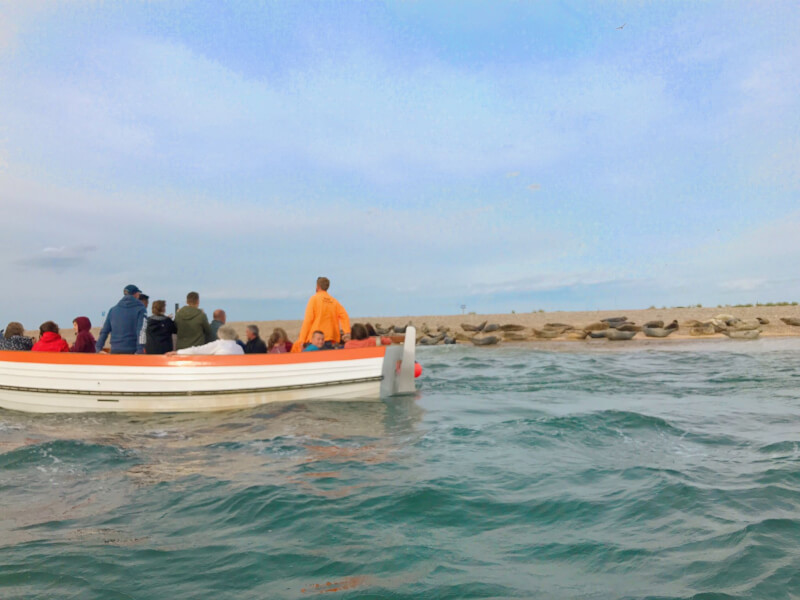 If you wanted to go and see the seals for yourself, there are boat trips you can take. They leave from Morston quay, and there are different companies you can use. I would recommend Beans, who I did take a trip with last summer.

Quite a few years ago now was this wildlife sighting. And by quite a few years I mean about 12. I can’t find my photos from this trip temporarily (I am hoping they are with my family somewhere), but back in 2006 I took a road trip across California with my dad and brother.

This was way before I was blogging or taking any note of the photos I was taking. But we were driving down the Big Sur towards Carmel and just happened to see some lying on a beach.

We pulled over and I remember being struck by how unbelievably large they were. I don’t think quite realised then how amazing it was to be seeing them.

I know how difficult the topic of tourism and wildlife is, but in a lot of cases tourism will help to contribute towards the survival of the species.

When going to see animals it is so important to your research. Make sure you are not harming them, or the environment they live in. That spending money to see endangered species contributes to their survival. That it’s not contributing to over exposing them through tourism and the animals aren’t being exploited.

For the large majority of my best moments I was with a guide who was able to tell me what to do and the safest way to visit.

I urge you to do your research, invest in a local guide and above all respect the animal.

What wildlife have you seen in their natural habitat? What was the most amazing part? 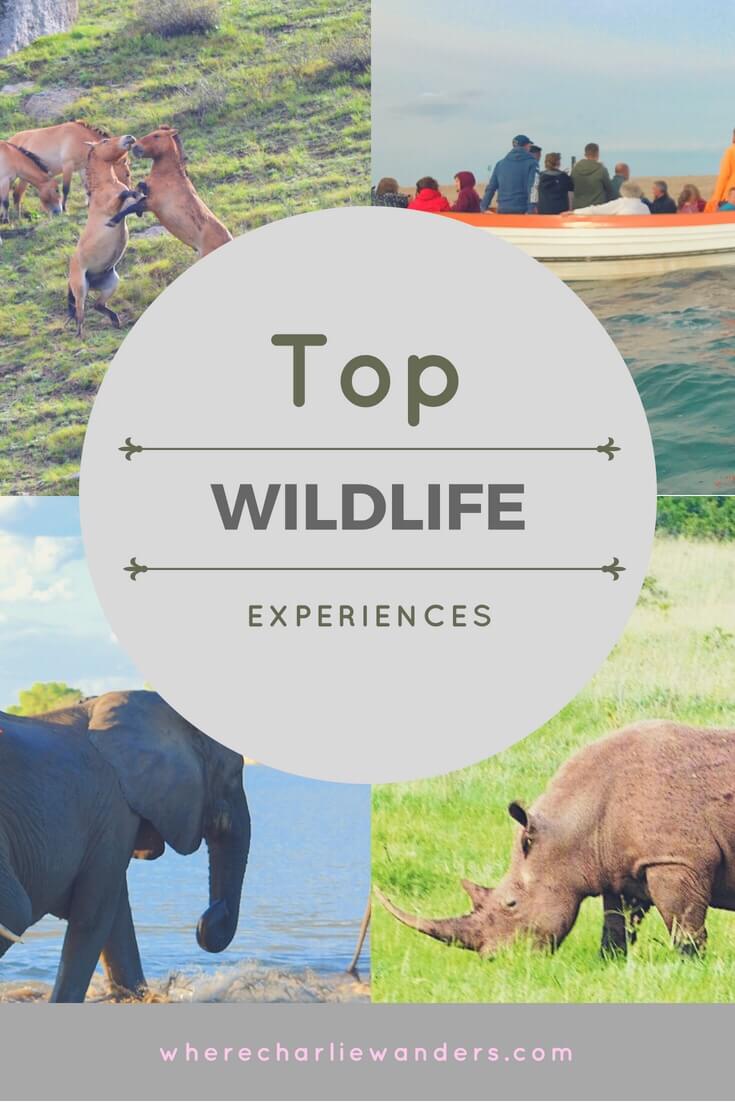 Best places to travel to in summer

Packing essentials for any trip

Do you use travel guidebooks?

Reaching 30 countries before 30 – the goal

What to pack for a ski trip

6 steps to research and plan a trip

Best places to travel to in Spring

Oh my goodness, this is such an amazing post!!
I am in love with the gorilla and chimp snaps you managed to get, they are so cute and it must have been an amazing experience to see them in the wild. I can’t say I have seen any of these animals in their natural habitat sadly!
I agree with you that wildlife and tourism can be difficult, I would definitely research like you to ensure the experience wouldn’t harm them in any way. I hope that at some point I can see some of these animals!!

Thank you so much! The gorillas I managed to get quite close to, but the chimps were being much more elusive. Seeing these animals in the wild are so amazing. I would recommend each and everyone of them!

Some of our favorite wildlife experiences happened in Africa. We unfortunately didn’t make it to see the gorillas on our trip last year, but saw many incredible animals doing animal stuff.

Africa has so much to offer. I really want to see a leopard in the wild!

You got some incredible photos! Jealous of the variety of wildlife you’ve managed to see! Great post 🙂

I was surprised as well when I put this post together! I do feel really lucky.

this is all incredible, such great pictures that show these animals how they should be out in nature.

Thank you. It is so lovely to see them where they belong. Particularly the horses, back in their rightful place