Amman is often the gateway into Jordan if you are arriving my air. And it’s definitely worth sticking around for a day or two to see some of the sights this capital city has to offer. This post covers some of the best things to do in Amman. 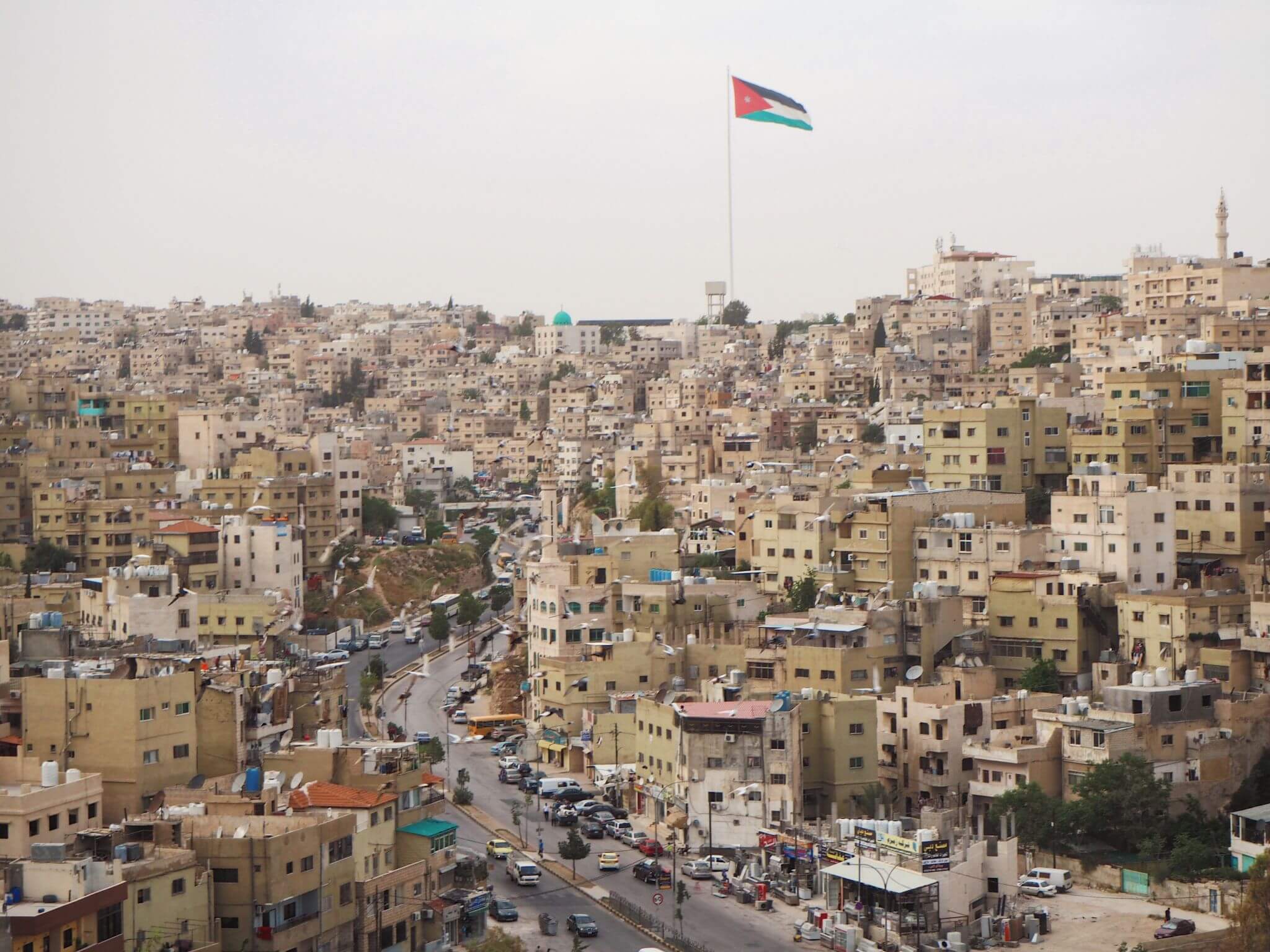 The citadel in Amman is possibly the jewel in the city. Incredibly this old ruin is right in the centre of the city and can be seen from quite a few places from around Amman.

Located on a hillside and known by the locals as Jabal al-Qal’a it dates back from 162AD. The oldest part of the ruins is the Temple of Hercules which form the iconic two giant standing pillars. It was built during the reign of Marcus Aurelius and once connected  to the forum. Now all is left is the two pillars and some ruins of Hercules on the floor. 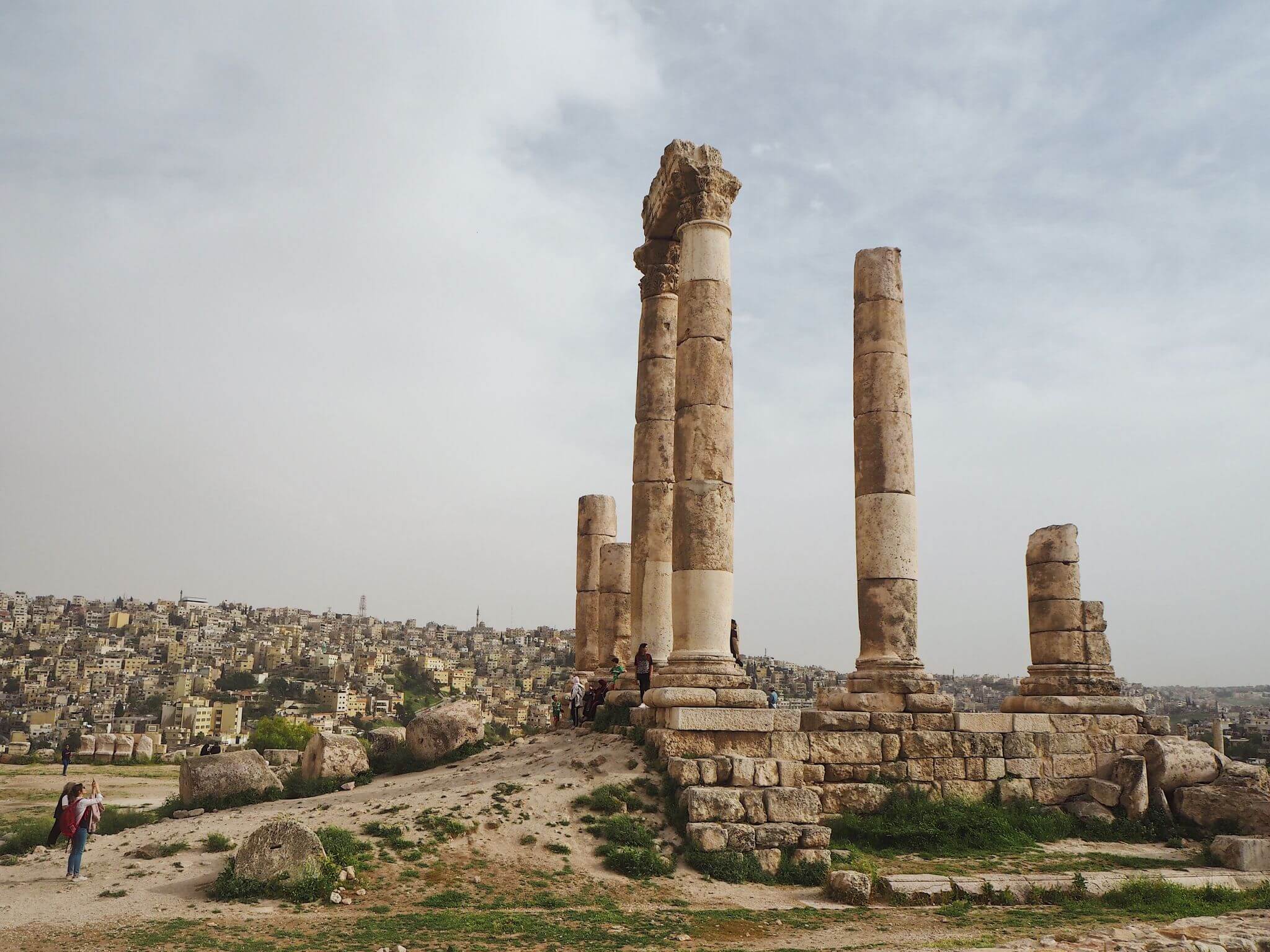 Behind the temple is the citadels most impressive buildings, the ones that form the Umayyad Palace. This was built in 720AD for Umayyad Arab royalty. However it was destroyed in an earthquake a mere 29 years later and never rebuilt. The impressive domed audience hall is still intact and amazing to walk around.

Finally, while you are there – make sure you take in the views of the city! Definitely top on the list of best things to do in Amman.

Getting there: It might be a good idea to get an Uber to it, as it is sat at the top of a very large hill. Entrance is 2JD.

A little way out of the city, but definitely walkable if you aren’t adverse to a few hills. It was built in 1989 as a memorial to the grandfather of the late King Hussein. It can fit up to 7000 worshippers, with another 3000 outside. 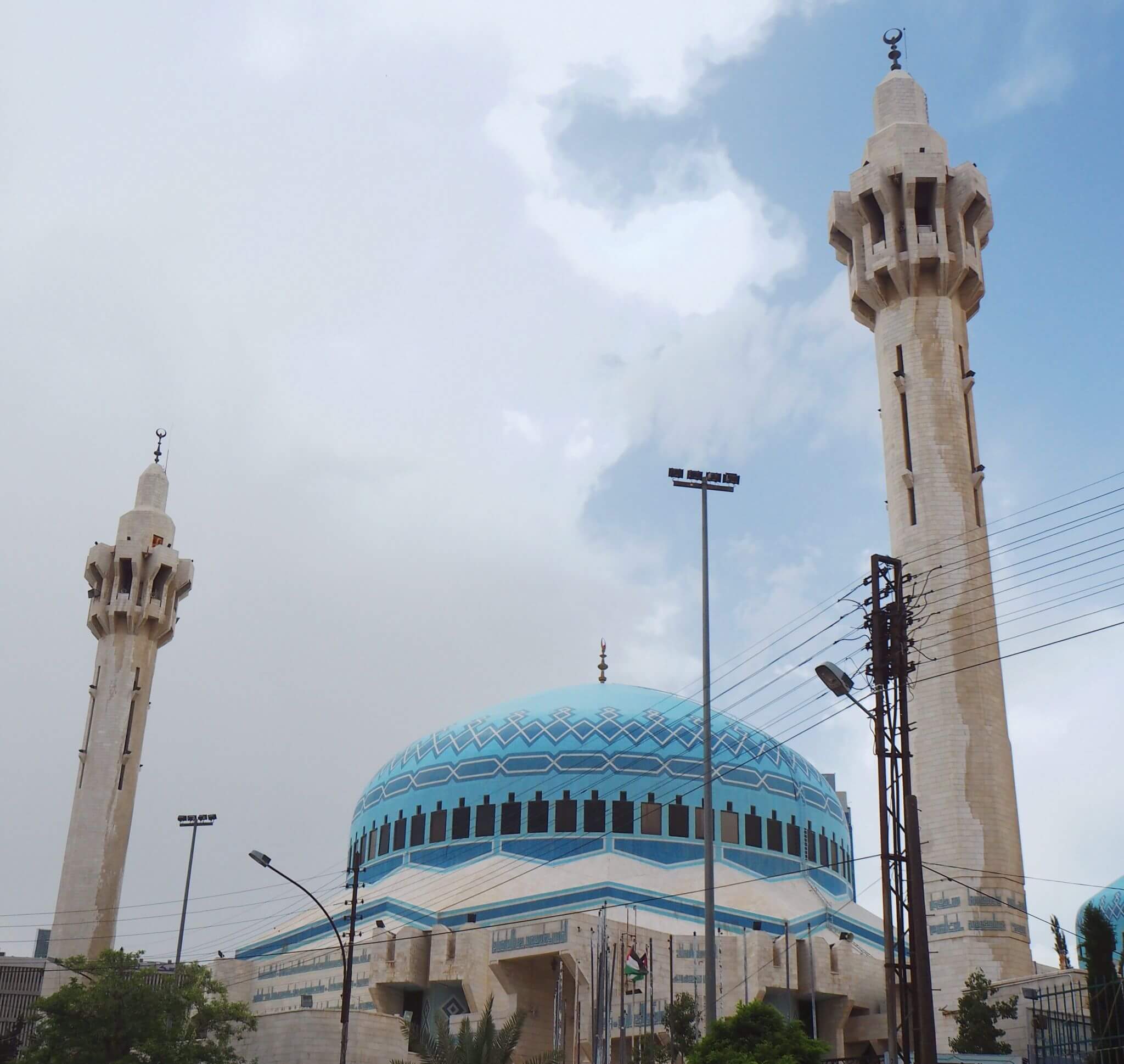 You need to enter through the visitors gift shop and it costs 2JD to enter. With the costs going to the upkeep of the mosque. However, make sure you don’t visit on a Friday and especially not during Ramadan as you won’t be able to enter due to the prayer schedule.

3. Grab some falafel at Hashem’s

One of the oldest and most famous restaurants in Amman, and will definitely be recommended when searching for someone to eat. It’s unique, a little mad and absolutely delicious. You haven’t tried falafel until you have eaten here. 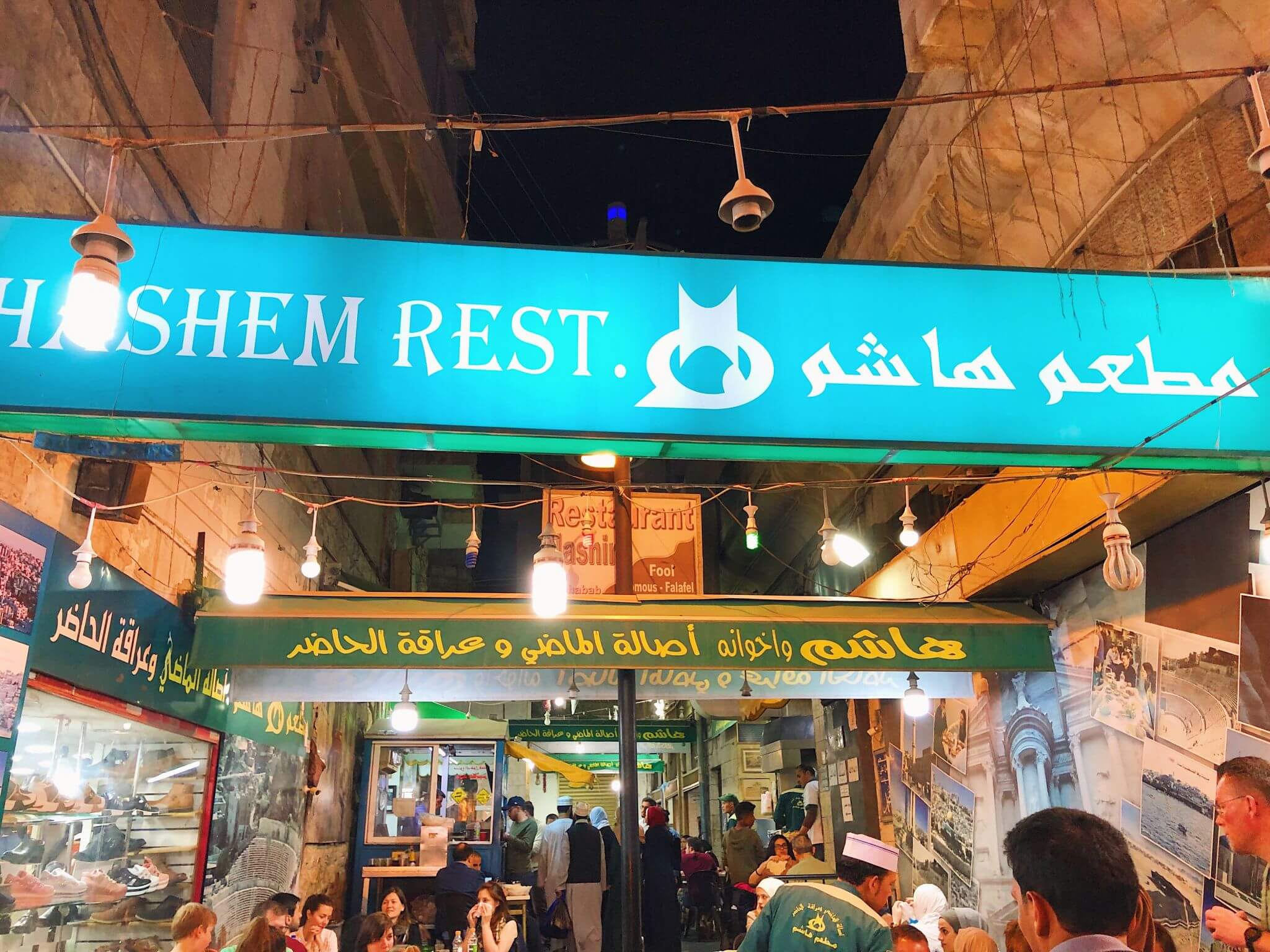 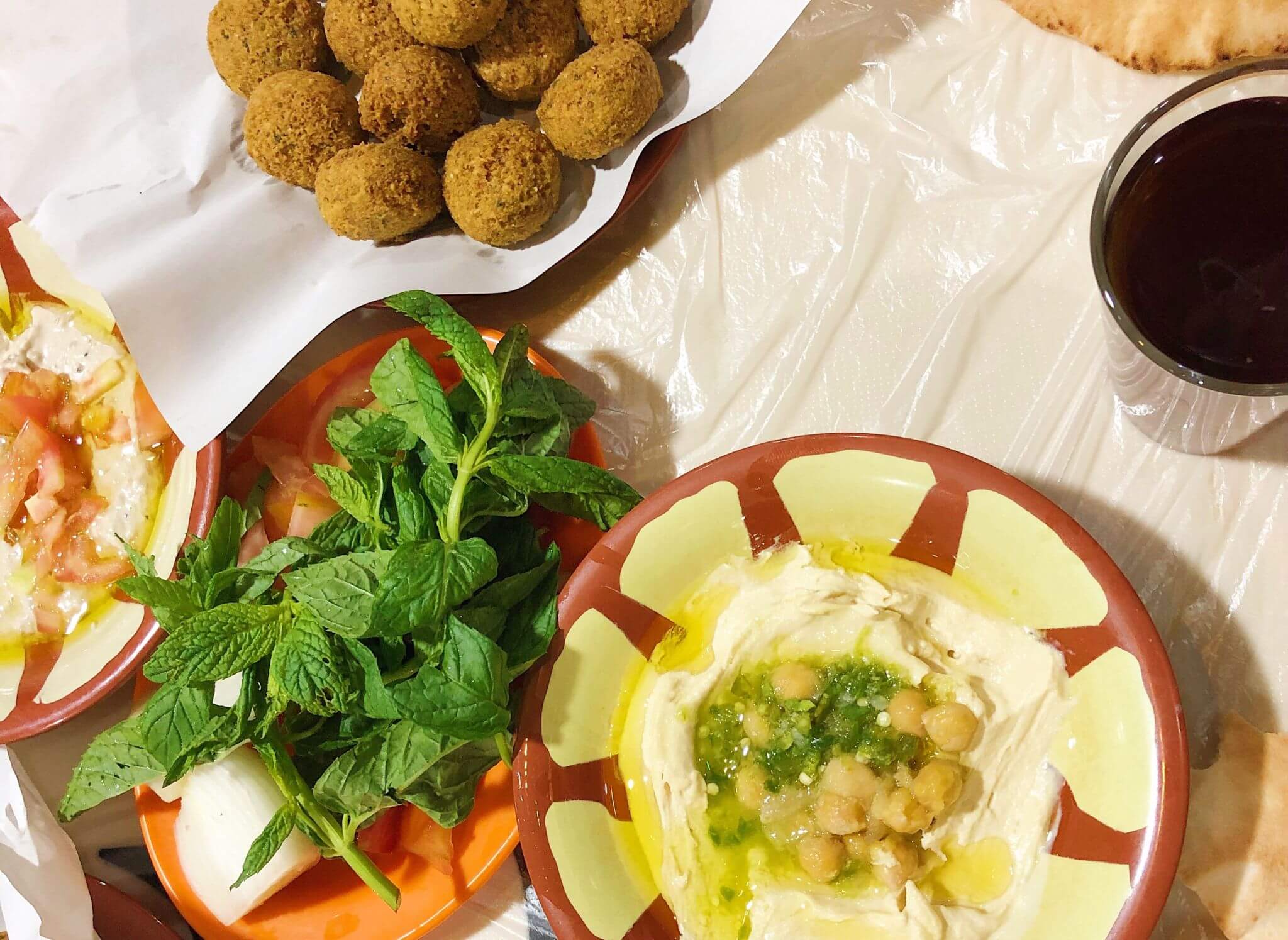 The restaurant is over 50 years old and loved by locals and tourists alike. Head down and hang out until a table becomes free. They clear by scoping the entire contents of the table into the plastic cloth, lay a new one down and you are ready to eat! There is no menu, but you are presented with the biggest table of food. Fafael, hummus and side dishes, all washed down with fresh mint tea. A wonderful Jordanian experience and not to be missed.

This place was recommended over and over again by locals, when asked where to go in Jordan. However, it is definitely best to visit in the afternoon and try and avoid Fridays, when everything closes for prayer times. 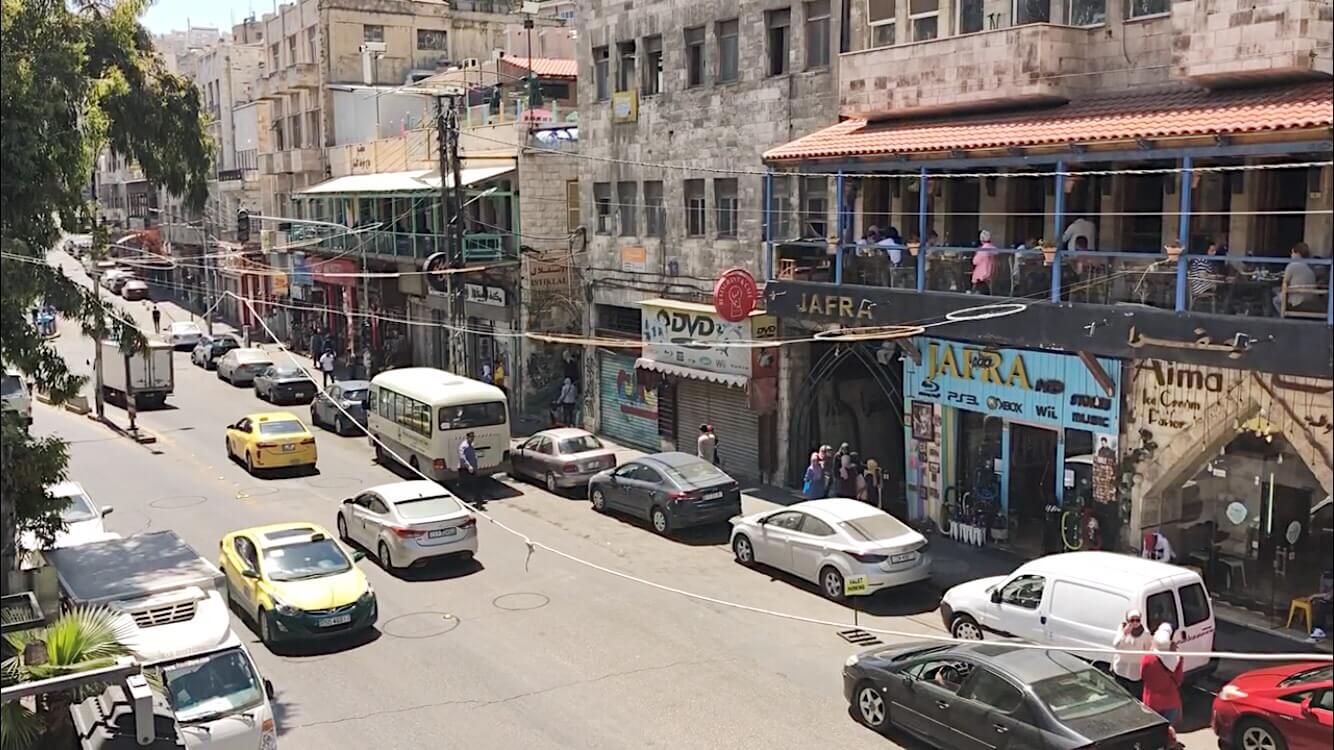 It’s packed full of shops, restaurants, cafes and art galleries and were the locals go to hang out. It has a great vibe, but it is best to go before the evening as many of the shops are closed then.

5. Gaze at the Roman amphitheatre

This enormous theatre is one of the best preserved of Roman Philadelphia. Seemingly cut into the hill itself, it can be seen from the Citadel ruins.

Although it was originally built in the 2nd Century AD, it was resorted in 1957. A lot of non-original materials were used, so it isn’t as historically accurate as it could be. However, it is still an impressive sight. It would have been used back in Roman times for religious performances and animal battling. Now, some entertainment is hosted in the amphitheatre, so it is worth checking with the tourist office to see if anything is on. 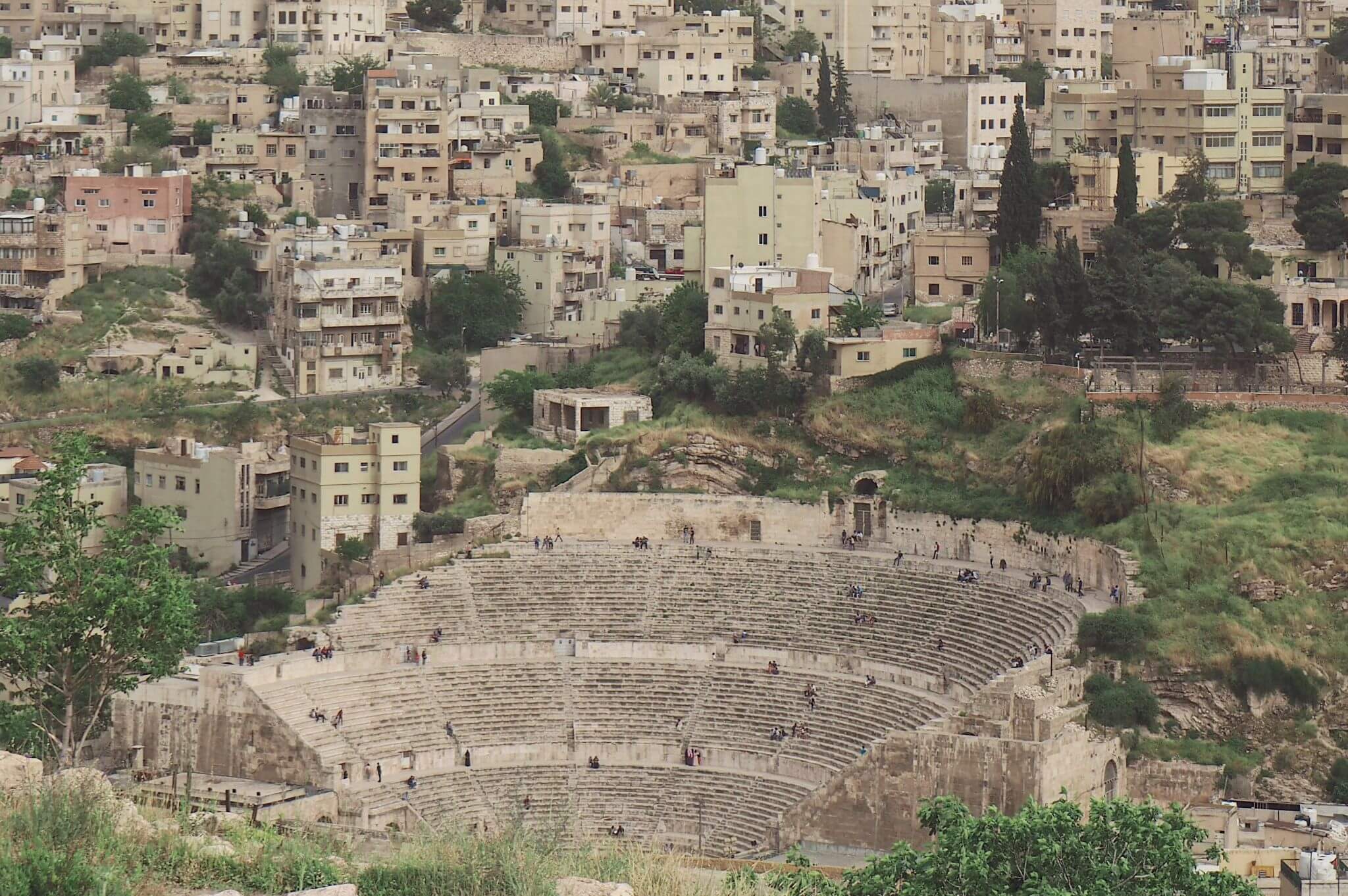 6. Sit under the Umbrella street

If you ask any local where to find the Umbrella Street they will most likely look at you blankly. This is a place create specifically with tourists in mind. Nonetheless, it is still a great place to go a see. Be warned though, the umbrellas are sometimes taken down for new installations, so they aren’t always there. 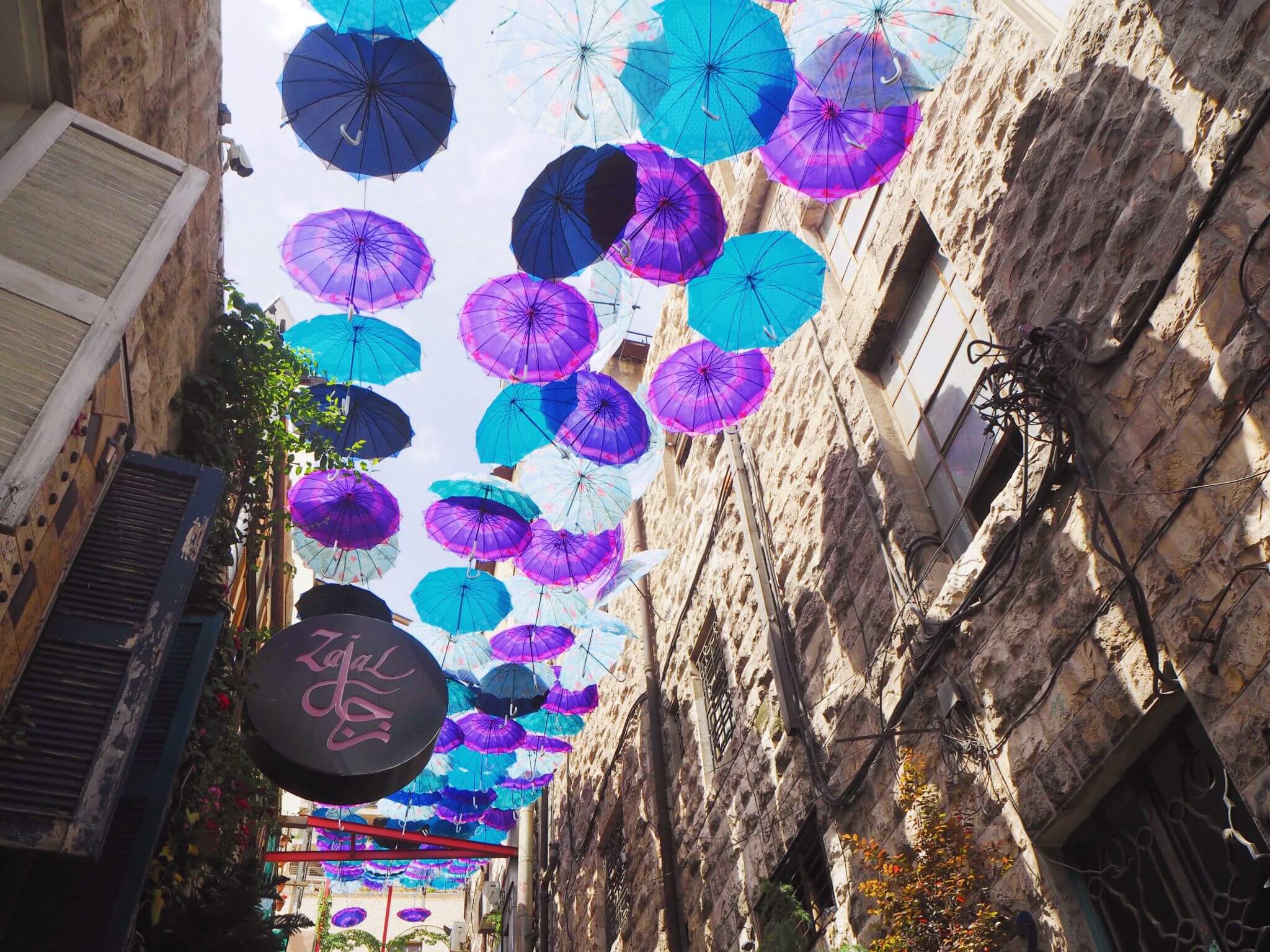 Located on King Fasial Street (I promise it was definitely in this location when I visited, even if it doesn’t show in google maps!) in Downtown Amman, right next to the famous Jafra café. A very small street, essentially made of just of steps. Perfect for sitting on while gazing up at the umbrella instillation!

Al-Balad is the downtown area perfect for picking up the Jordanian souvenirs to take home. This maze of streets is home to every kind of shop you can imagine. 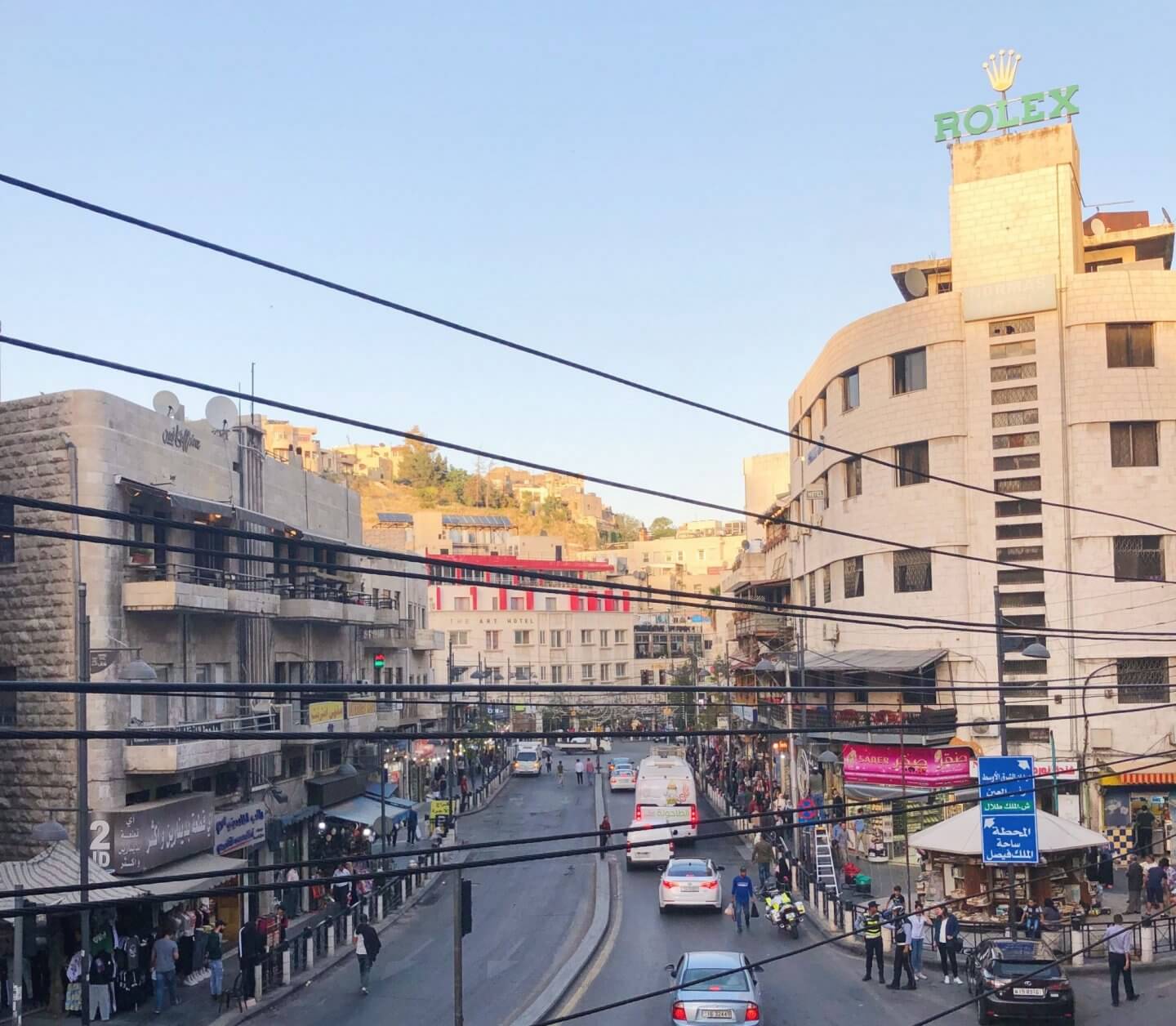 Take home magnets, snow globes, badges and everything else you can imagine. I even was given a free bookmark! The prices here are going to be a lot cheaper than in Petra. So if you are after the classic Jordanian scarf look – this might be the place to find it!

Shops are open into the evening, so you can peruse after having some food in the near by restaurants and cafes.

8. Take a day trip to Jersah

The ancient Roman city of Jersah is only an hour north of Amman. A whole blog post on this, coming soon. But is definitely worth a visit!

The easiest way to get there is to take a day trip, such as this one, as public transport is not the easiest around Jordan. However, car hire is always an option if you wanted to explore further. 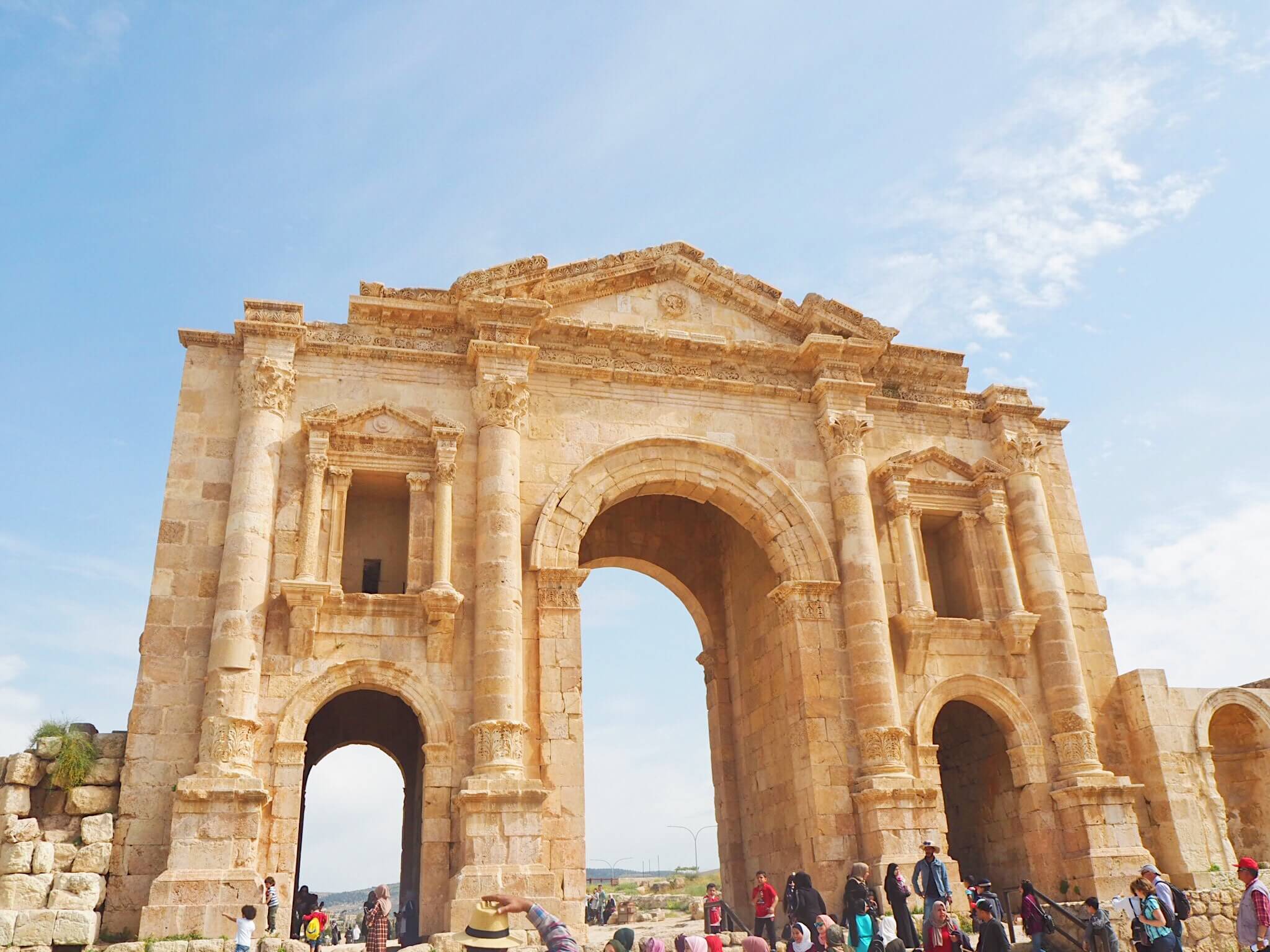 Once you arrive you will be greeted by the impressive Hadrian’s arch. Step through this, and check out the old arena, the huge amphitheatre, Temple of Zeus, the Forum and columns galore!

There are hundreds of options on where to stay in Amman to suit all price ranges. If you are going budget I can recommend the Sydney Hostel, which is very located for Downtown Amman. Click HERE to book.

If you are looking to splash out, the Four Seasons had been very highly recommended. Click HERE to book.

Heading to Jordan? Don’t miss these posts for more inspiration: 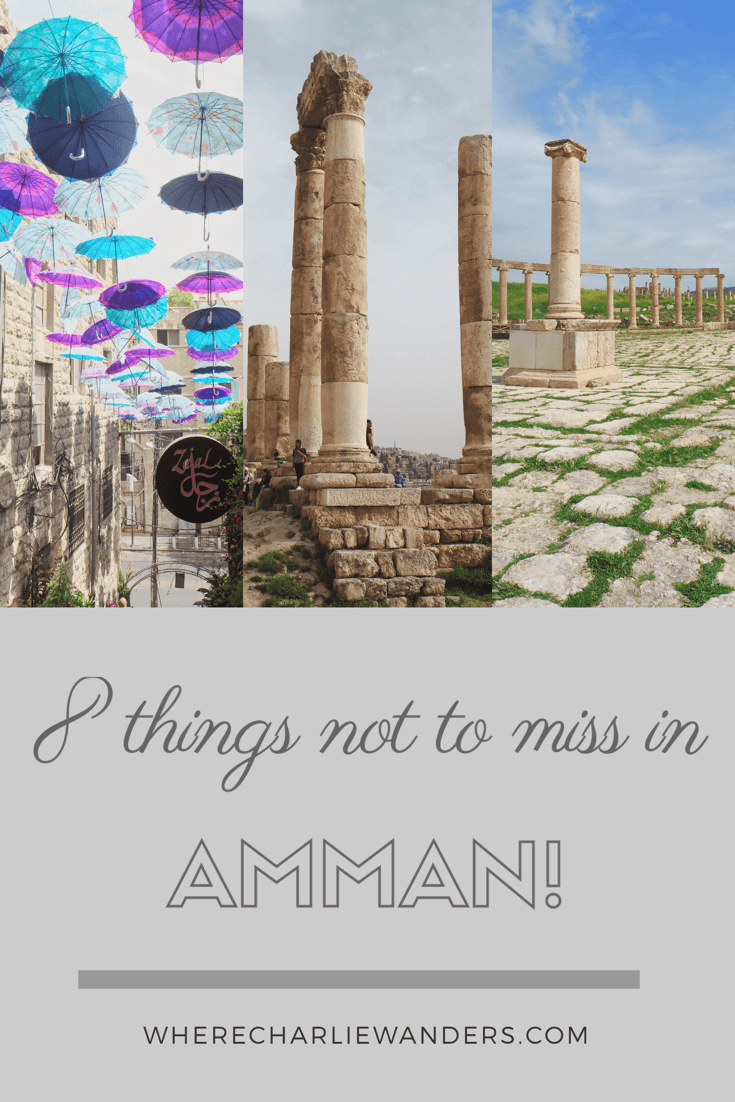 Will save this for when I go in October! I can’t wait 😍😍😍

Ahhh how amazing!! I’ll be sharing more Jordan posts in the next few weeks, so hope they will help 😊

I’m a Jordanian and your list is very good!!! Especially for The Hashem one, it’s so delicious but hard to find a seat

Thank you so much. Comments like this mean so much, I hope I can return to your country soon!