Visiting Valley of the Kings

From the outside the Valley of the Kings seems incredibly unassuming compared to the temples you see around the country. However, visiting Valley of the Kings is one of the most important and most impressive sights in Egypt. If anywhere will take you back in time, this sight will be it!

What is the Valley of the Kings?

After the over the top statements for tombs that was the Pyramids, the Pharaohs of the New Kingdom chose this isolated valley on the West Bank of the Nile to hide their magnificent tombs, deep into the sides of the hills. Now known as the Valley of the Kings. 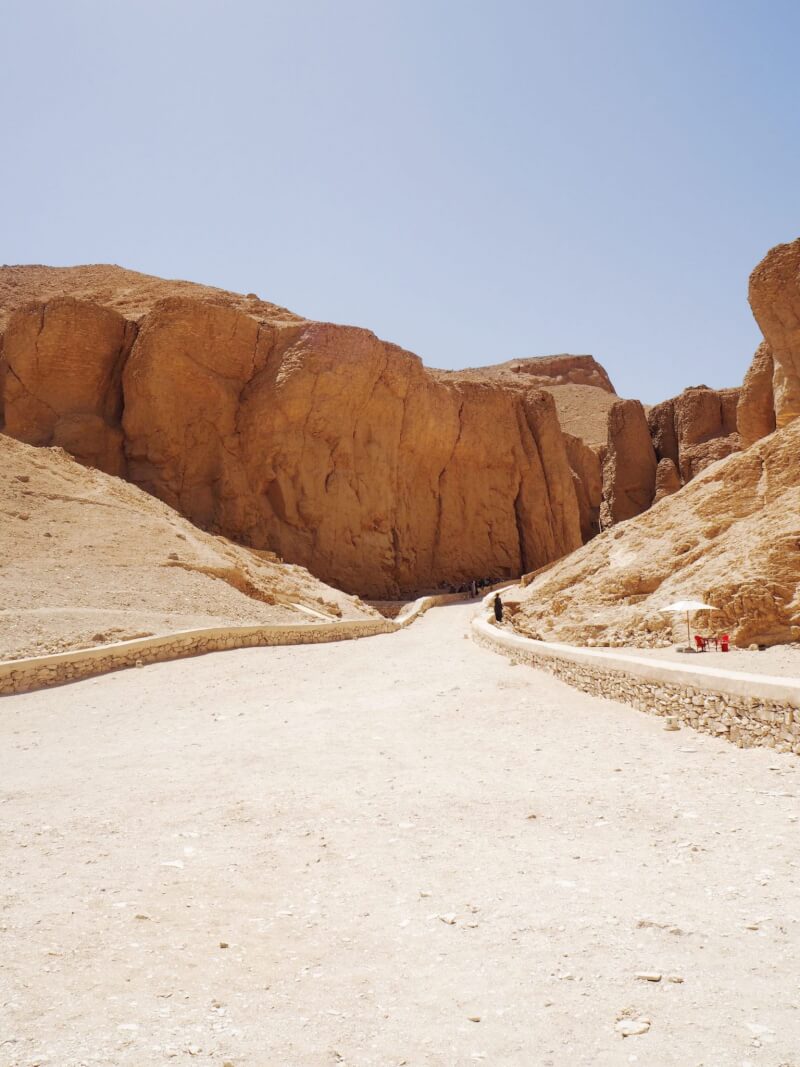 The chambers were all built in secret, not even the next pharaoh knew where his predecessor was buried. The men who worked on the tombs lived, and were buried, in a village also on the West Bank. They were given homes for them and their families but they were never allowed to cross the river back to the East side. This was significant as the Ancient Egyptians believed life was on the east and death on the west.

As of 2019 there had been a totally of 63 tombs have been found. The latest was empty, but it might be significant discovery as many believe it heralds the existence of more. In fact, if you speak to an Egyptologist they will be sure there is more to find.

The most recent significant find was the famous tomb of Tutankhamen, which was found in 1922 by Howard Carter. It was completely untouched and so even though he wasn’t a good pharaoh they were huge amounts of treasure.

How much does it cost when visiting Valley of the Kings?

There are some additional costs you can spend your money on, if you so wish.

There are also some special tombs which require an additional ticket for, although I chose not to visit. The world famous Tutankhamen’s Tomb is one of these, at a cost of 200EGP. 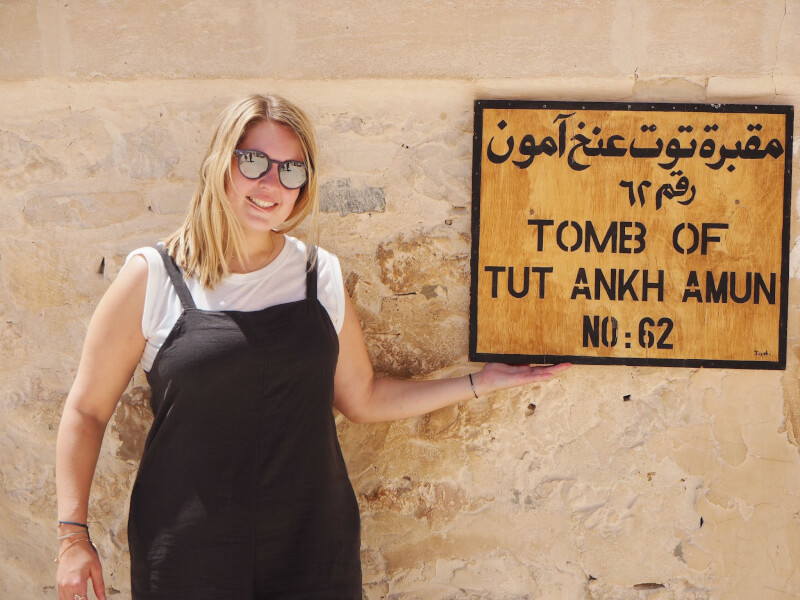 The the other tombs which require an additional ticket are the tomb of Rameses V and Rameses VI (80 EGP / £3.75 / $4.75) and Seti I which is an expensive 1000 EGP (£46 / $60). This tomb has long been closed to the public, but is now open for the additional cost. Safe to say,  I didn’t pay to see it, but it is said to be one of the most impressive and greatest achievements of Egyptian art.

Guides in the Valley of the Kings

As I was on a group tour, I visited here with our guide who is a trained Egyptologist. Absolutely fantastic, as he had so much knowledge about each tomb, the history of the pharaohs and when it was discovered. To try and preserve the tombs, and to stop over crowding, no guides are allowed into the actual tomb themselves.

I would recommend visiting with a guide, as they will give you so much additional knowledge. Do your research when booking, make sure they are reputable!

Entrance to the Valley of the Kings

When visiting the Valley of the Kings, you arrive into the visitor centre. Here there is an incredible impressive model of the valley, so make sure you stop at it. It shows a relief of the terrain, with the entrance to all the tombs marked out. However, its when you look underneath and see the warren of the tombs you realise just how impressive the building is here. 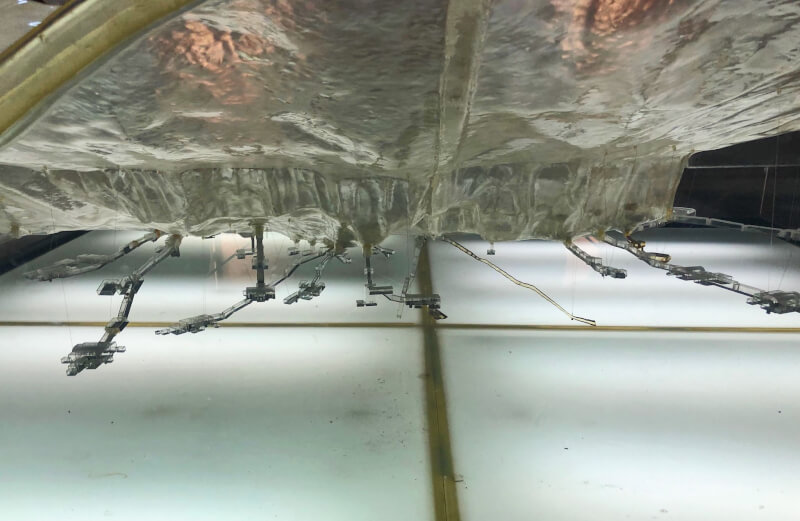 A little train called a tuf tuf then takes you up to the valley itself. This costs 4EGP, but is worth it especially in the heat.

Which tombs to visit?

As I mentioned the ticket allows you entry into three of the tombs. Our guide recommended which of the tombs is best to visit. However to try and preserve the tombs they do now operate a rotational system as to which ones are open. So at the time of my visiting these were the tombs that were recommended to give a great overall impression of the different styles.

The second largest tomb in the valley. Merenptah was the 13th son of the great Ramses II, and became Pharaoh because his father lived for so long the first 12 sons died before him. This was the deepest of the tombs I visited and you enter through a long, fairly steep ramp. The painted walls were faded, but you could see how impressive the decoration was. 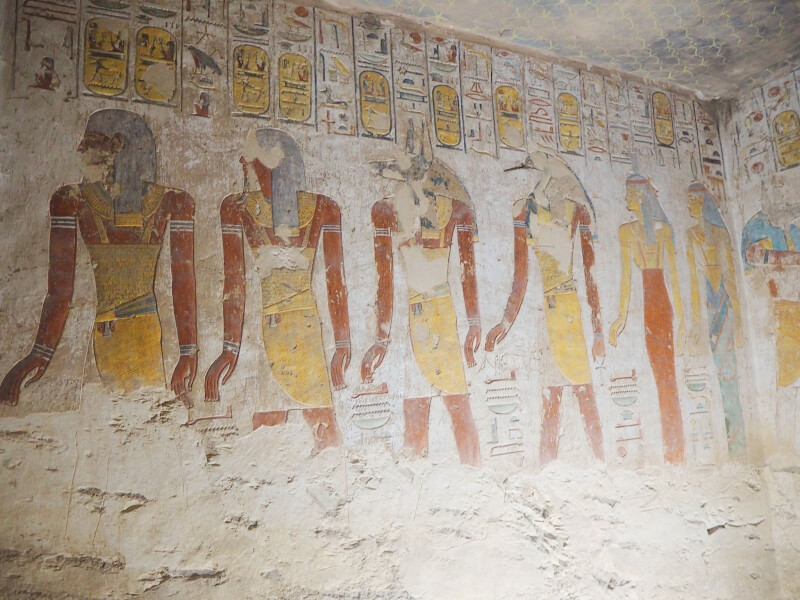 At the very end it opens out into the burial chamber, which had part of the sarcophagus still in it. A very impressive sunken room with niches cut into the walls

The only double tomb in the valley. Tawosret was the wife of Seti II and ruled after her husband died in the 19th Dynasty. She had built the tomb for herself and her husband, but their burials were removed after the early death of Sethnakht. They built a second burial chamber for him as there wasn’t time to finish his own tomb. As Tawosret was a women, they believed she didn’t have a right to be in the Valley of Kings and should be buried in the Valley of Queens. 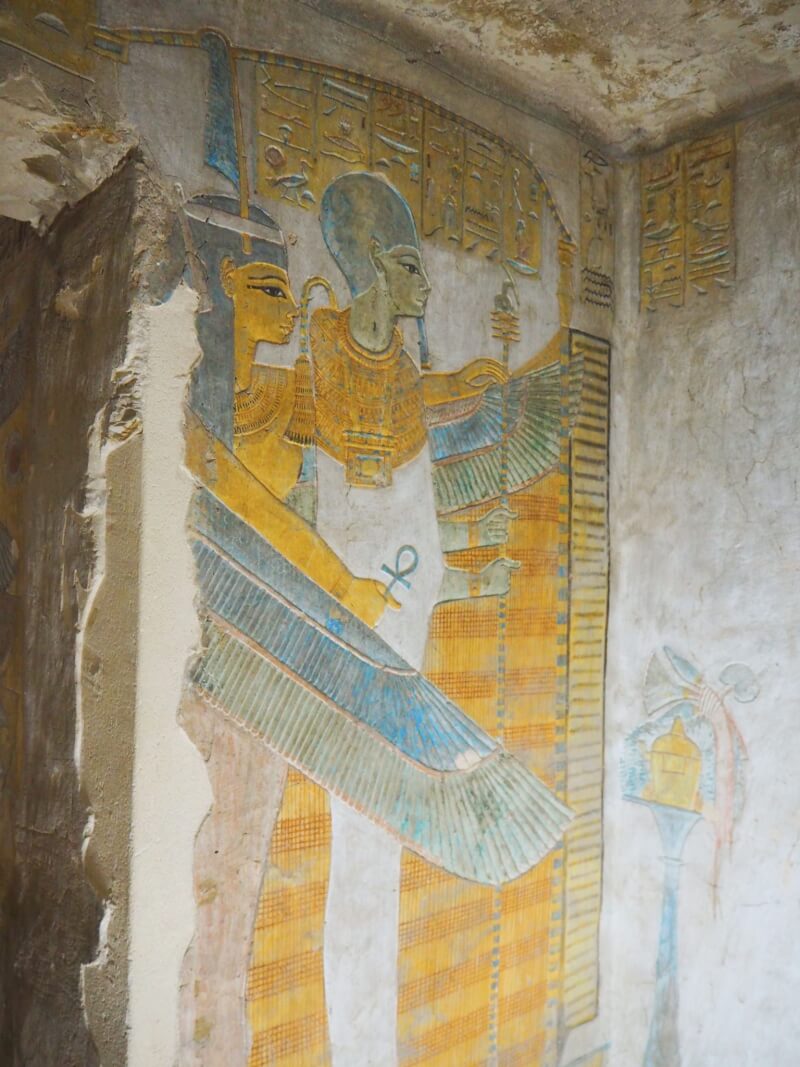 This was actually my favourite of the three tombs. The entrance wasn’t so steep and the colours on the walls so much more vivid. Her burial chamber was beautiful with two huge paintings, depicting scenes from the book of caverns on the wall. They showed the sun god as a ram-headed figure stretching out his huge wings. 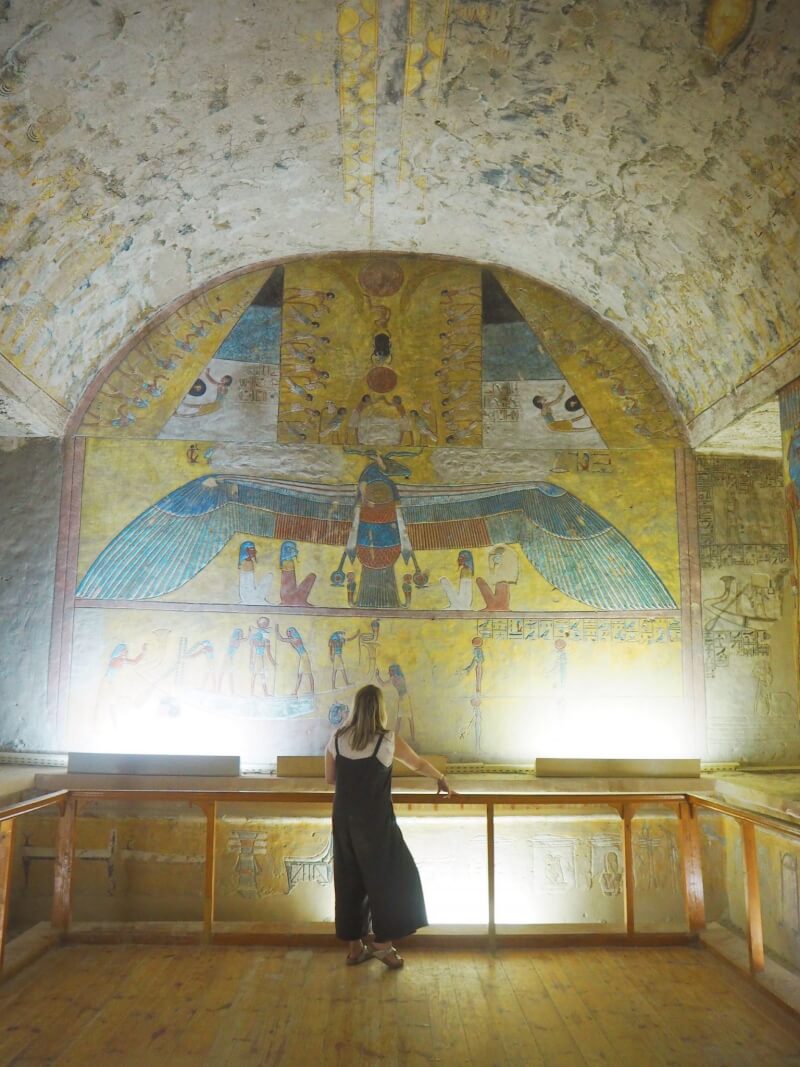 As you go into the burial chamber of Sethnakht you can see the change in ownership. The images hadn’t been finished and some were still just drawings. His sarcophagus can still be seen here.

The tomb of the unlucky pharaoh. His reign was troubled with plague and famine, but his tomb is spectacular. In keeping with his unlucky reputation this tomb shows a rare mistake by Egyptian builders. They got the direction of the shaft wrong, and hit the shaft of another tomb. So they had to change direction but you can still see the mistake. 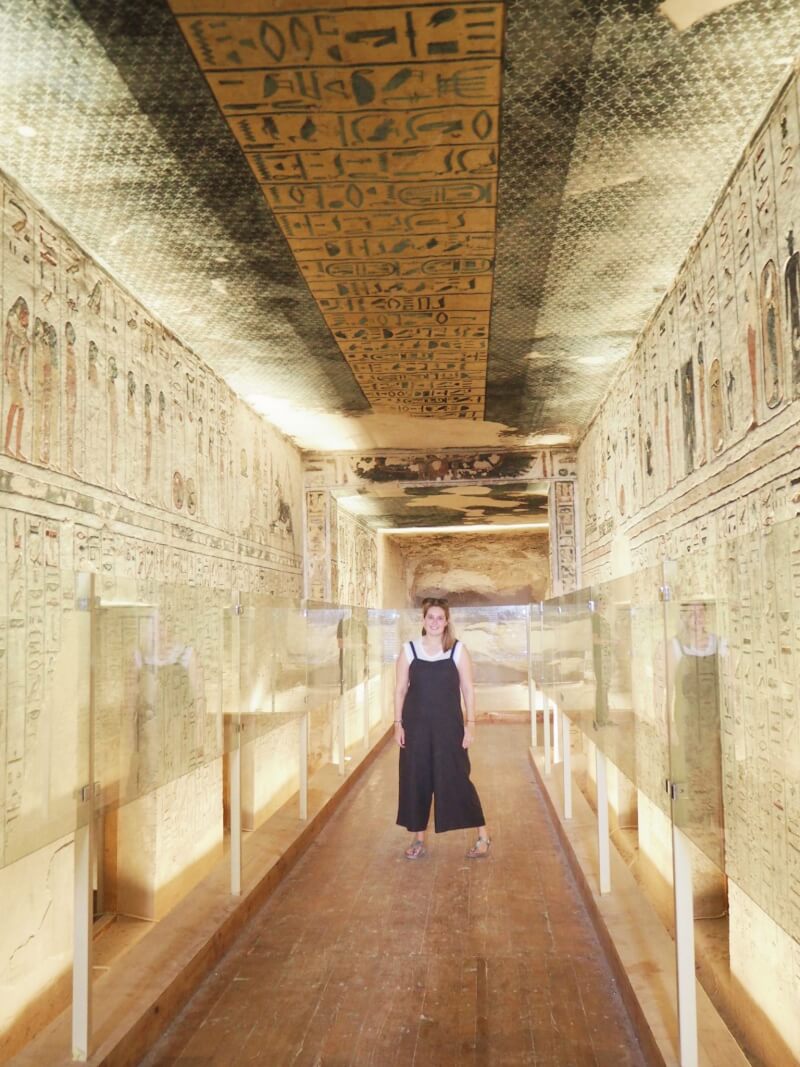 This tomb is one of the best preserved with incredibly impressive decorations. There are lots of side chambers off the entrance tomb with contain scenes from the Book of Gates and the Litany of Ra. At the end the tunnel has collapsed. Fitting for the unlucky pharaoh. His sarcophagus is in the Louvre in Paris and his mummy is one of the ones I saw in the Egyptian museum I saw in Cairo. 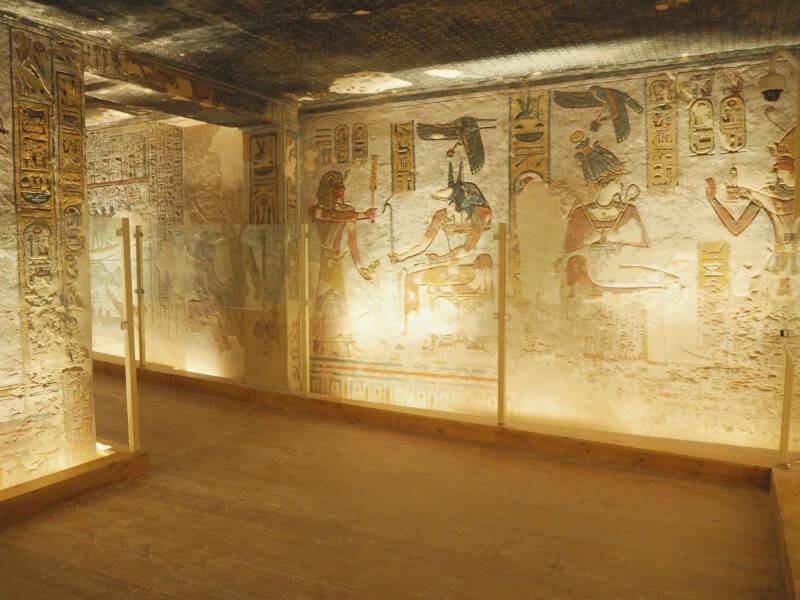 Can you take photos in the tombs?

Until recently you couldn’t. But they have now relaxed the rules to allow photography and videography in most of the tombs. 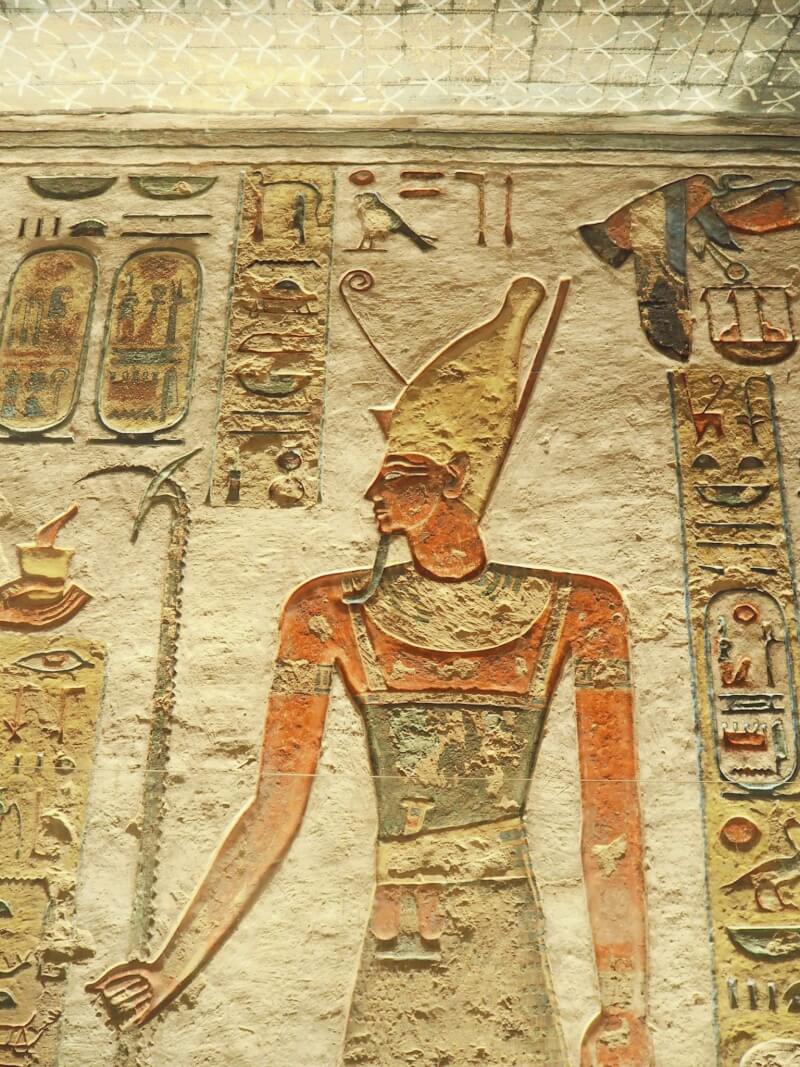 But you do have to buy a photography pass. And, unlike at other sights across Egypt, these tickets are checked often! The price for the photography ticket is a rather steep additional 300EGP (£14 / $17.80). I paid it, and definitely felt like it was worth it!

Is visiting Valley of the Kings worth it?

I honestly think this was one of the most important places I visited in Egypt. The temples were insane, and trust me when I say insane, but the Valley of the Kings was equally as special. To be standing literally inside underground chambers that were carved and decorated all those years ago? It’s hard to describe how that made me feel. 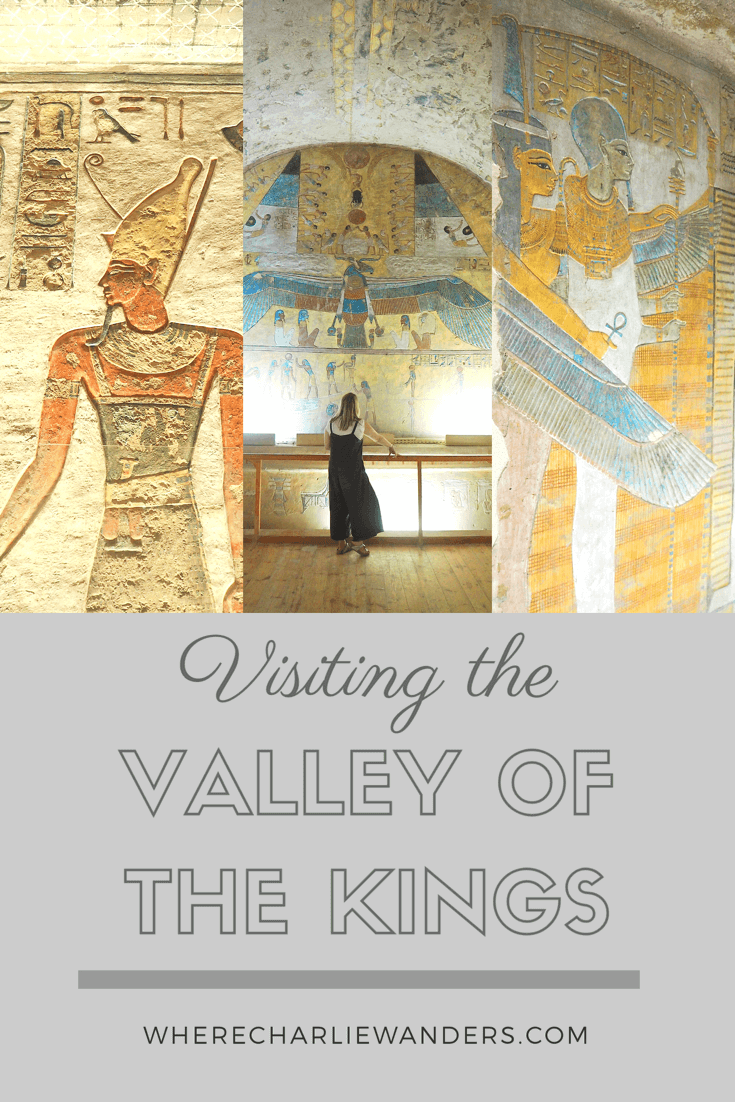 Why you should write a travel journal when...

The Valley of the Kings is impressive! I don’t know why so many tourists neglect it in favour of the Pyramids, Abu Simbel or Karnak, the Valley is a truly unique place on Earth and well worth the splurge of money

It definitely is!! I think because you can’t see as much from the outside? But honestly, standing inside these ancient rooms. Absolutely out of this world

Ohh this looks like such an amazing experience – all of your Egypt photos are really inspiring me to visit! I have a degree in history, and even though I never studied Ancient Egypt, I think I would find all of the tombs so interesting! I’ve never heard of a separate photography pass but it looks like it was 100% worth the extra cost! Natalie x

It was honestly just incredible! I absolutely love historic places when I travel, and Egypt has definitely been a highlight. I cannot recommend enough. How amazing to have a degree in history!

A lot of places in Egypt had the separate pass. This was the most expensive and also the only one I bought. But definitely definitely worth it!

Your photos looks incredible! I visited Egypt in 2016 and I fell in love with the country and its people.
It is one the country with the most interesting history and it is definitely a highlight of any traveller’s life if you love their fascinating history!

I agree! It was such an incredible country. And so hard to imagine a place with that much incredible history. I just loved it!