Covered bridges in Vermont you need to see!

Vermont is an incredibly picturesque and adorable state in the East Coast area of the United States of America. The covered bridges in this area are synonymous with the state, and definitely contribute to its charm!  It is home to more than 100 covered bridges, the most to be found in any state. This post brings you some of the best covered bridges in Vermont, and each offers something a little different! Make sure you don’t miss them when you visit Vermont!

Heading to New England? All of the bridges can be visited by following the itinerary on this post about the best one week New England roadtrip itinerary!

This bridge is located in heart of the the quaint and picturesque town of Woodstock, right opposite the green. It was only built in 1969 and replacing the iron bridge that had been there since 1877. However, it was built using traditional methods, giving it very authentic covered bridge vibes! 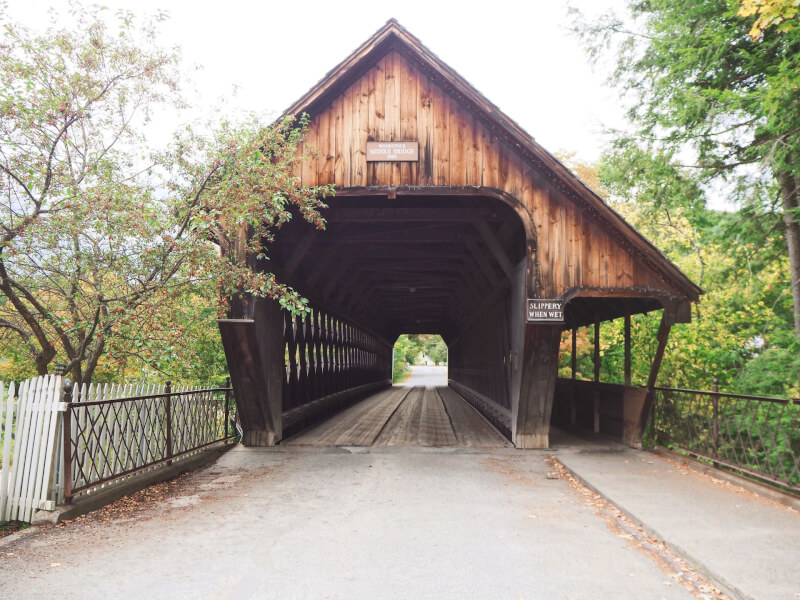 Spanning the Ottauquechee River cars can drive across it, however it isn’t hugely busy. Also, uncommonly, it has a pedestrian sidewalk attached along one side. 139 ft long and built in a very pretty lattice style, it is a perfect place to snap the classic covered bridge shot.

There are also Taftsville and Lincoln covered bridges located around Woodstock, if you haven’t had your fill!

Stowe is home to quite a few of the classic covered bridges in Vermont; the first to mention is Emily’s Bridge. Real name – Gold Brook Bridge. If you are only going to visit one covered bridge in Vermont, make it this one! 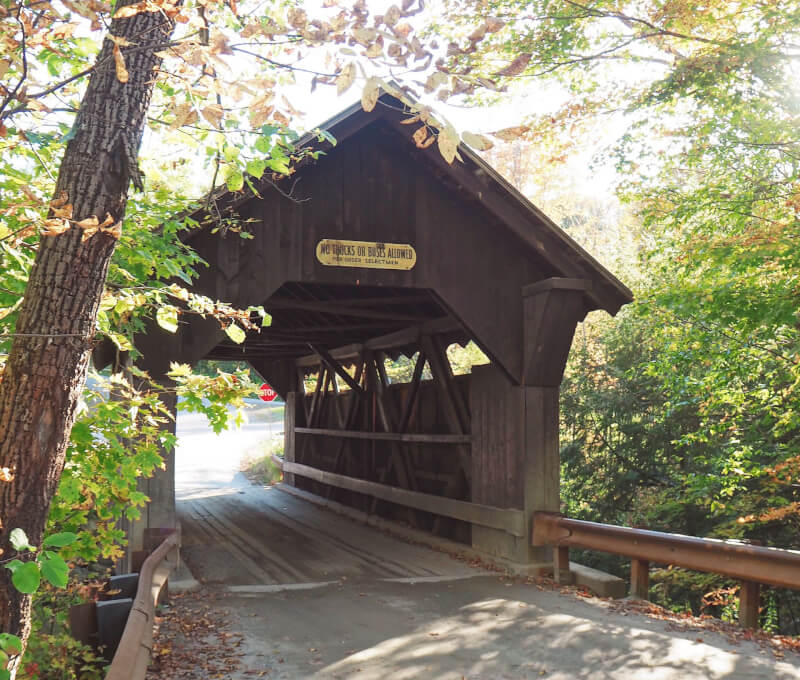 Not your ordinary covered bridge. This comes with a tale! It is named Emily’s bridge as it is said to be haunted by the ghost of Emily with differing tales of why she haunts the bridge. There are two which are the most common.

The first tells of how she was meant to meet her lover at the bridge to elope. When he didn’t show, she hung herself from the rafters. The second tells of how she was at the church, ready to marry when her groom didn’t show. The jilted bridge took the family wagon in sorrow and anger and was merciless on the horses. As she turned onto the bridge, she didn’t navigate the turn and the horses and her plunged down the bank. Both the horses and Emily were  killed.

While there is no actual historical evidence that ‘Emily” existed, there have been many reports of strange incidents at the bridge. Scratch marks appearing on vehicles, being touched or scratched by Emily. And strange noises – footsteps, tightening of ropes and screaming. Apparations are said to have been seen. The most commonly reported times of these paranormal activies are between midnight and 3.30am. So if ghost hunting is your thing, head late at night. 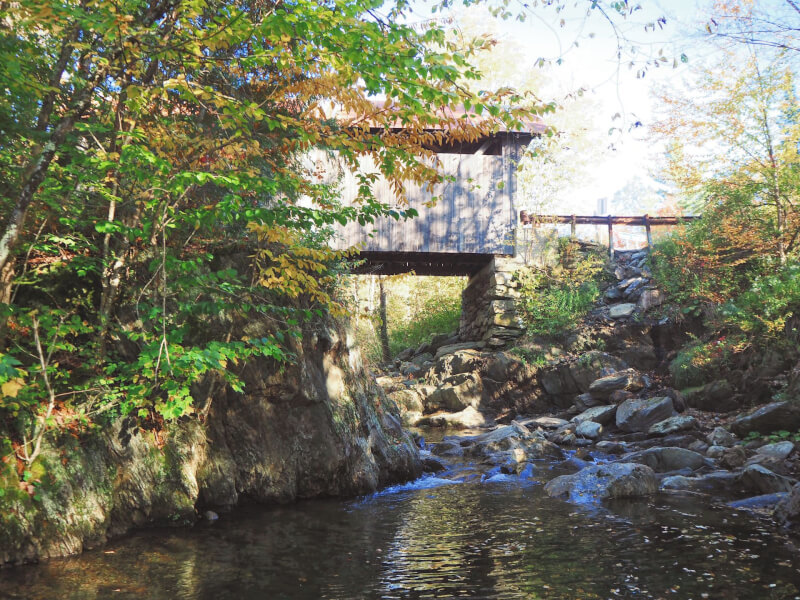 If you aren’t so sure about the ghost stories, this is still a very pretty bridge to visit during the day. You can get down the side of the bridge to the brook below, for a beautiful aspect looking back towards the bridge.

This red covered bridge in Vermont, is located a little outside of the town of Stowe. It carries the Cole Hill Road across Sterling Brook, and is incredibly pretty in the traditional red. Built in 1896 and is the only surviving 19th century bridge left in the town, even though it is thought to be one of the last built in the century.

It is quite short and narrow, with only width for one car to cross at a time. But it is the distinct red colour which  makes it worth visiting! It isn’t the easiest to find, but make sure you are following Cole Hill Road and eventually you will come across it. There is also an easy place to pull in just across the bridge, making it easy to snap those necessary photos!

The West Dummerston covered bridge is the longest one completely  in Vermont! The Cornish-Windsor covered bridge is actually longer, however this crosses a state line from Vermont into New Hampshire. Located a little outside of the town of West Dummerston.  Dating back as far as 1872, it has sustained some damage in recent years. Storm Irene did some damage in 2011 and forced it to close. Then in 2017 the bridge was again damaged by an oversized truck. 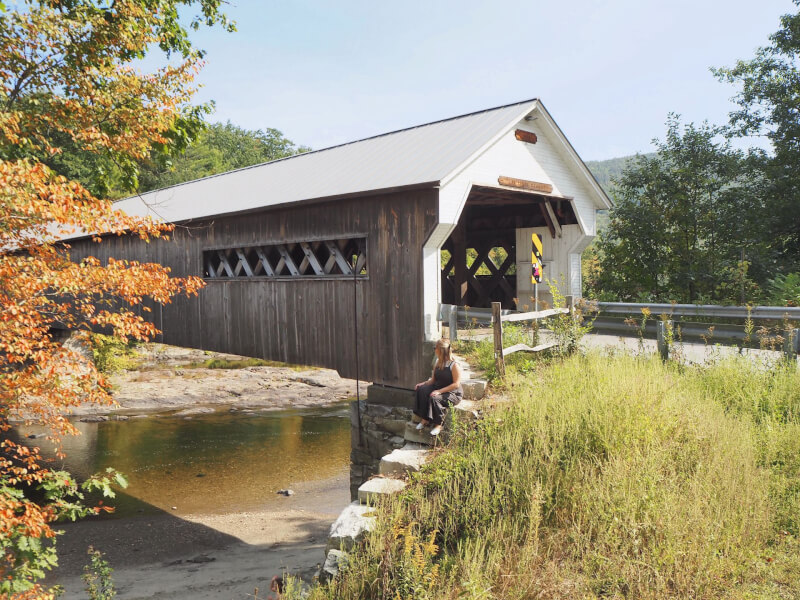 When you are visiting the bridge, don’t miss the path down the side leading to the West River. Here you can splash around in the river, and there are even some natural beaches formed. Perfect to chill on a summer’s day or to cool down if the fall weather is still warm!

A little tiny, mini covered bridge to view! It’s just really cute. Set right in the heart of Stowe, so very easy to find. This is fantastic, as it might not be worth a specific trip in it’s own right. However, it is very adorable and while it seems to be fairly new, is very traditional in look! It also has great views looking back over the town. 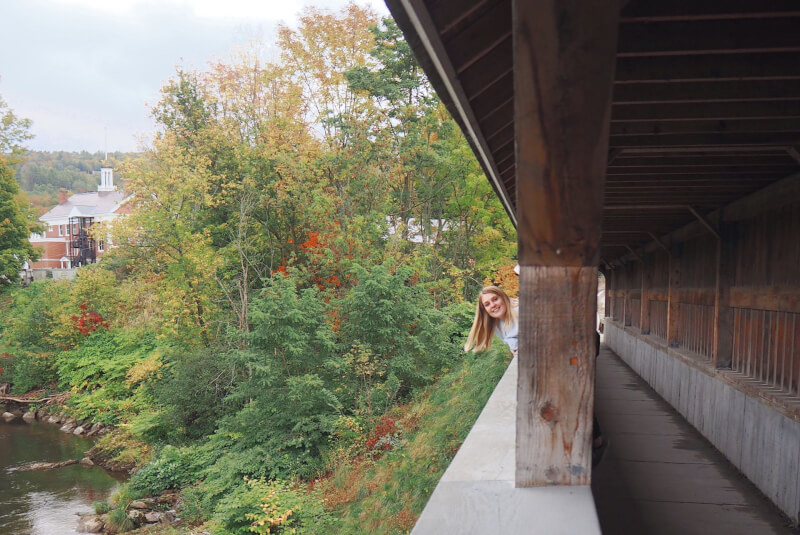 This bridge can be found right next to the absolutely wonderful Vermont Country Store. Even if you don’t go here because you want to see the bridge, then go for the store! Chock full of all the traditional, local products you could ever want. However, the bridge itself is also worth a stop!

It is named the Kissing Bridge after an old tradition from the horse and buggy days. When crossing a boy would stop in the middle of the bridge to give his girl a kiss, as this is somewhere which would always be quiet and without other people! Covered Bridges were therefore often called Kissing Bridges, and the name stuck with this one. 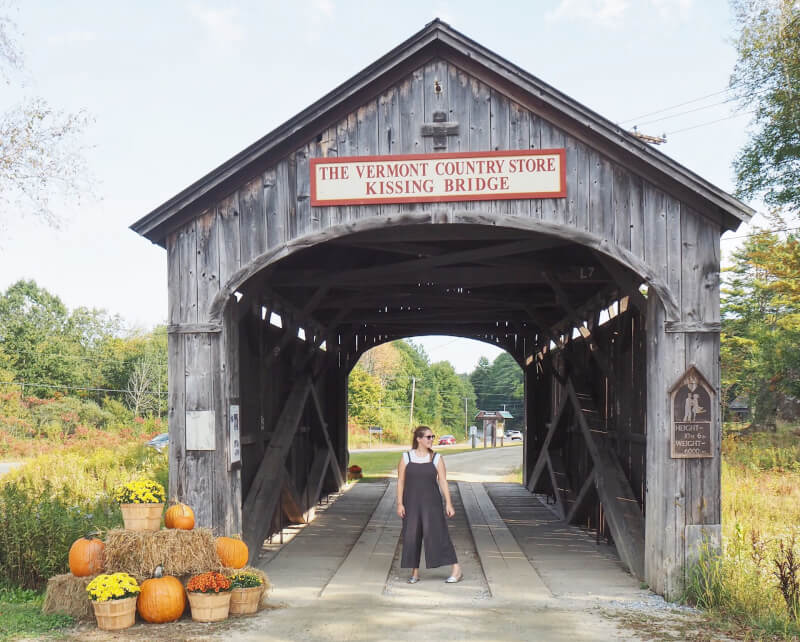 Originally know as the Depot bridge, it was first built in 1870, then dismantled in 1959 when it was moved and rebuilt in 1967, using the traditional style and methods! Another absolutely classic Vermont covered bridge!

Why are there covered bridges?

You may be wondering why covered bridges in Vermont were originally built? The answer is really quite simple, and it’s not because they look beautiful! It is simple to protect the wooden structure from the varying weather. The weather in this part of the USA can be extreme. An uncovered bridge used to last around 20 years, whereas a covered one would last over 100 years.

The weight of the snow in winter had the potential to demolish a wooden bridge. However with a covered bridge, the pitch of the roof causes the snow to fall off into the river, causing no damage to the bridge itself.

Pictures of the covered bridges look absolutely stunning all year around, but take a look at them in fall and winter to really whet your covered bridge appetite! 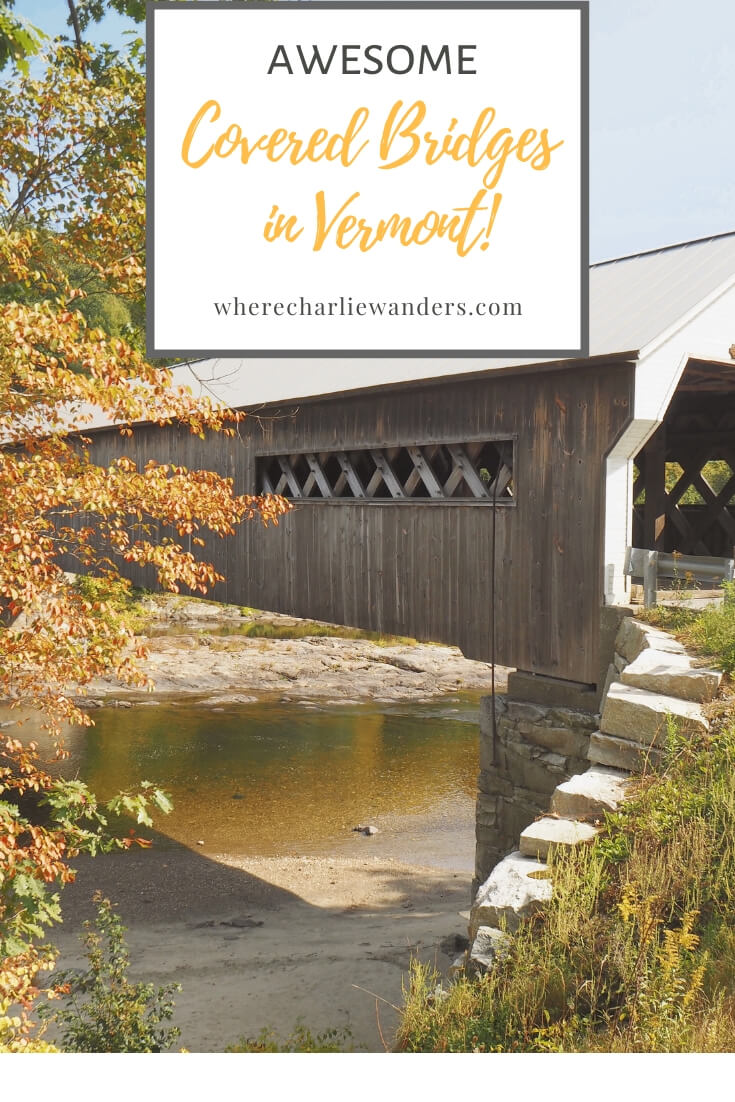 Non Gambling things to do in Las Vegas

Things to know about Cuba before visiting

18 things to do in Havana, Cuba

How to apply for a Cuban Visa from...

Visiting New York in the winter

Hi Charlie,
This is a wonderful post. I grew up in New England, ( Connecticut ) and saw my share of covered bridges there and Massachusetts but not Vermont.

This post will be our guide for that adventure.

Following you here and on Social Media.

Thank you so much! That’s so lovely from a New Englander!! I hope you enjoy Vermont!

Thanks for sharing, I saw a couple of these when I went in 2016, bringing back some lovely memories 🙂

Ahhh aren’t they the best? Such a fab plans!