Any first trip to Cambodia will no doubt involve visiting both of these destinations. Phnom Penh is the main arrival destination, and capital, for Cambodia, and Siem Reap is not only a wonderful little town but also the gateway to Angkor Wat. This blog post will provide an insight into spending a few days in Cambodia

Arrival into Cambodia and Visas

There are two main ways to arrive into Cambodia – flying or by land boarder. I crossed into Cambodia from Vietnam at the Bavet/Moc Bai crossing, which is about two and half hours into the public bus journey on the HCMC, Vietnam to Phnom Penh, Cambodia route.

Cambodian Visas can be purchased on arrival here, but note – if you are going the other way, Vietnamese Visas need to be arranged in advance.

The official currency of Cambodia is Riel, however this is rarely used. The main currency is US dollars, but they don’t use any coins. So if you pay for something less than a dollar, you will receive change in Riel. It is good to have newer dollar bills, as damaged ones are often not accepted.

The Capital of Cambodia and a busy place! 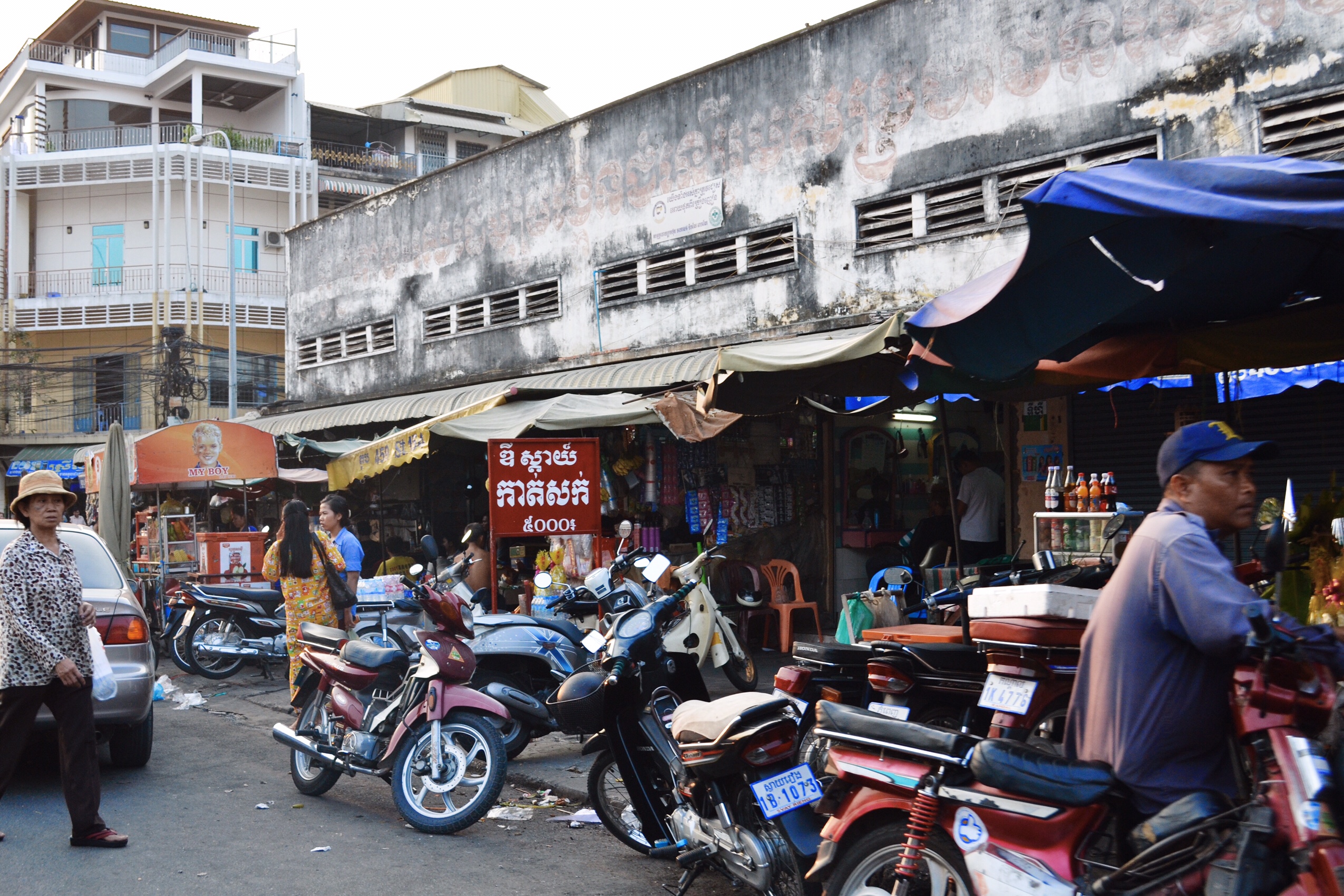 There are no good pictures of this tour to share. It was minutes before this I realised my card had been  cloned and with it all savings had gone. Let’s just say my head wasn’t totally in the tour.

There isn’t a huge amount to do in the city, but a couple of things I would recommend to see:

Fun and a little insane. Inside is a maze of stalls that sold absolutely everything. Great to pick up a couple of souvenirs.

To make the most of the visit, I would suggest investing in a guide, as there is very little information about the palace. But certainly a beautiful building.

Eat: Friends the restaurant. Which not only serves great fusion food, but also is a charity which works to build a future for the local youth. 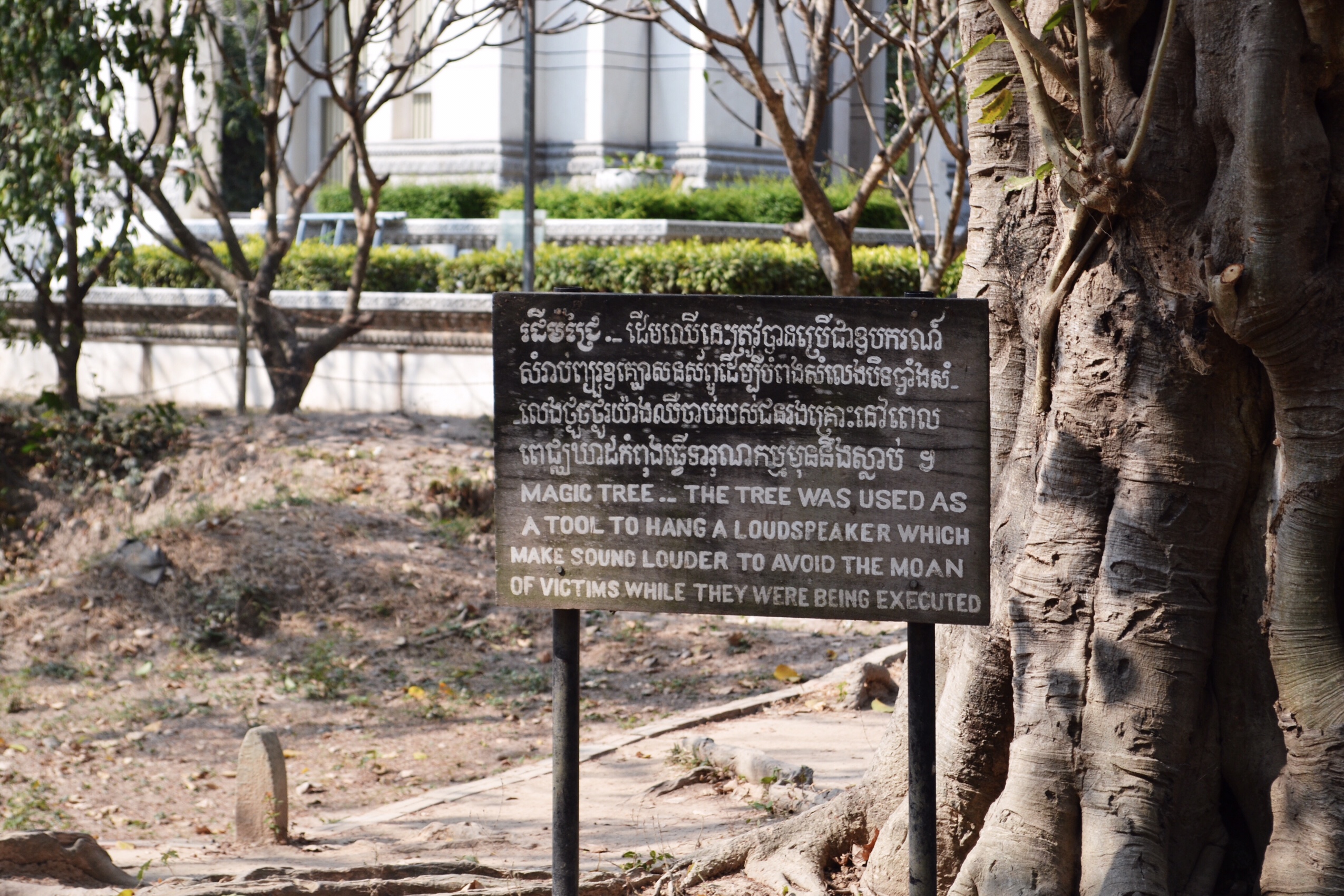 We visited the Killing Fields first, which is the site of a mass grave holding over 8000 people. During the Pol Pot reign anyone who was educated above Grade 7 or with money was executed, to try and create a peasant nation. I won’t go into details about the horrors we learnt about here, but it was incredibly shocking and sobering.

After this we then headed to the Tuol Sleng Genocide museum, a former school turned into prison during the Genocide. Our guide was cautious about what information he gave us in public, as he was afraid people were listening and some of those in power were part of the Pol Pot regime. It was a a very real reminder of how recent these atrocities were. 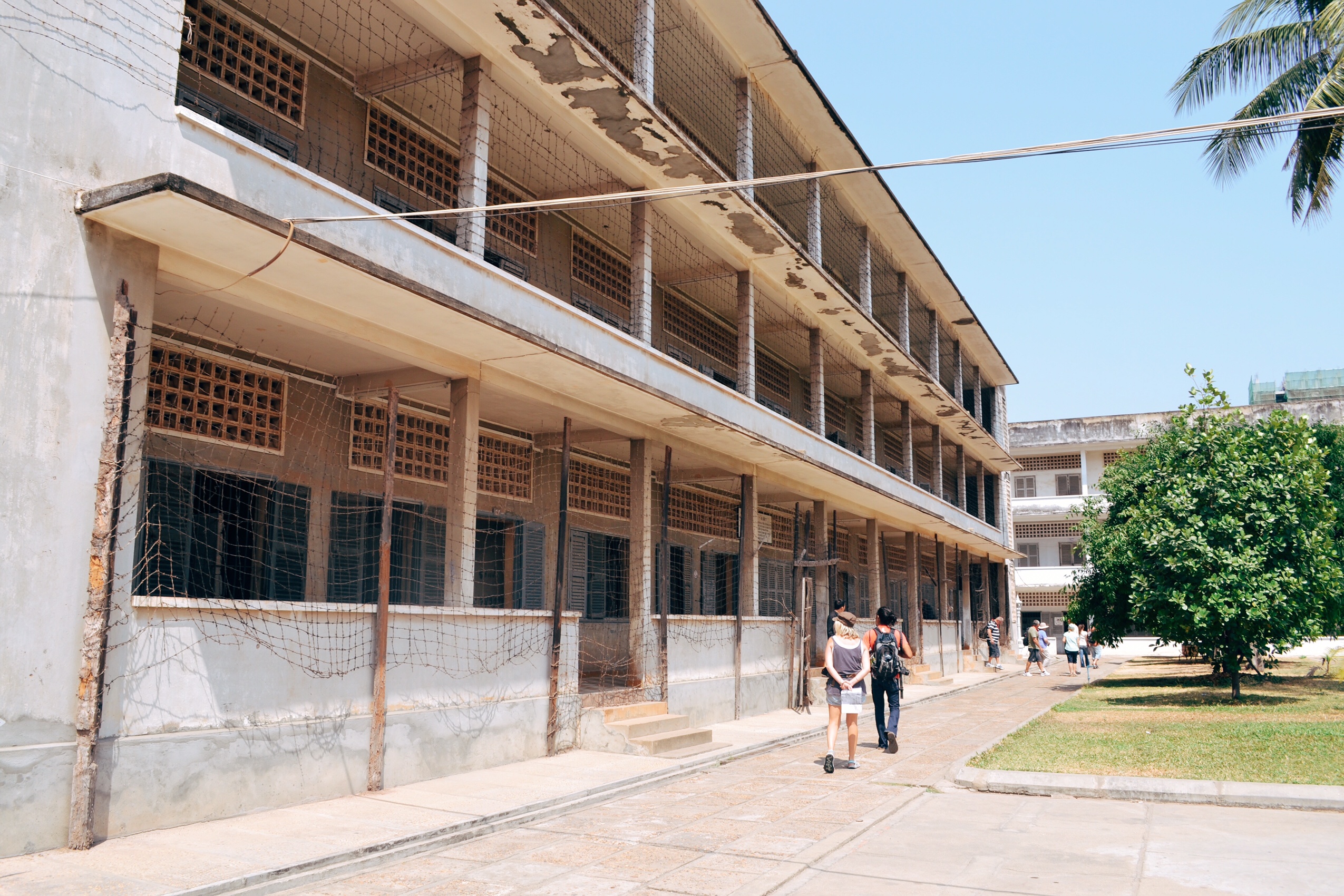 You can see the former classrooms turned into cells, pictures of prisoners and I even had the chance to meet Mr Chum Mey, who was one of only 7 of at least 12,000 to survive the prison.

The population of Cambodia before the genocide was 7 Million, and afterwards only 4.

Visiting these sites do show you what Cambodian’s went through in recent history, while the rest of the world had no idea.

How to being with Siem Reap, I loved this town and could have stayed for much longer! The first place to head is Pub Street for an evening of fantastic night life. For only a few dollars you can buy buckets, I can’t exactly tell you what is in them but I had a great night. 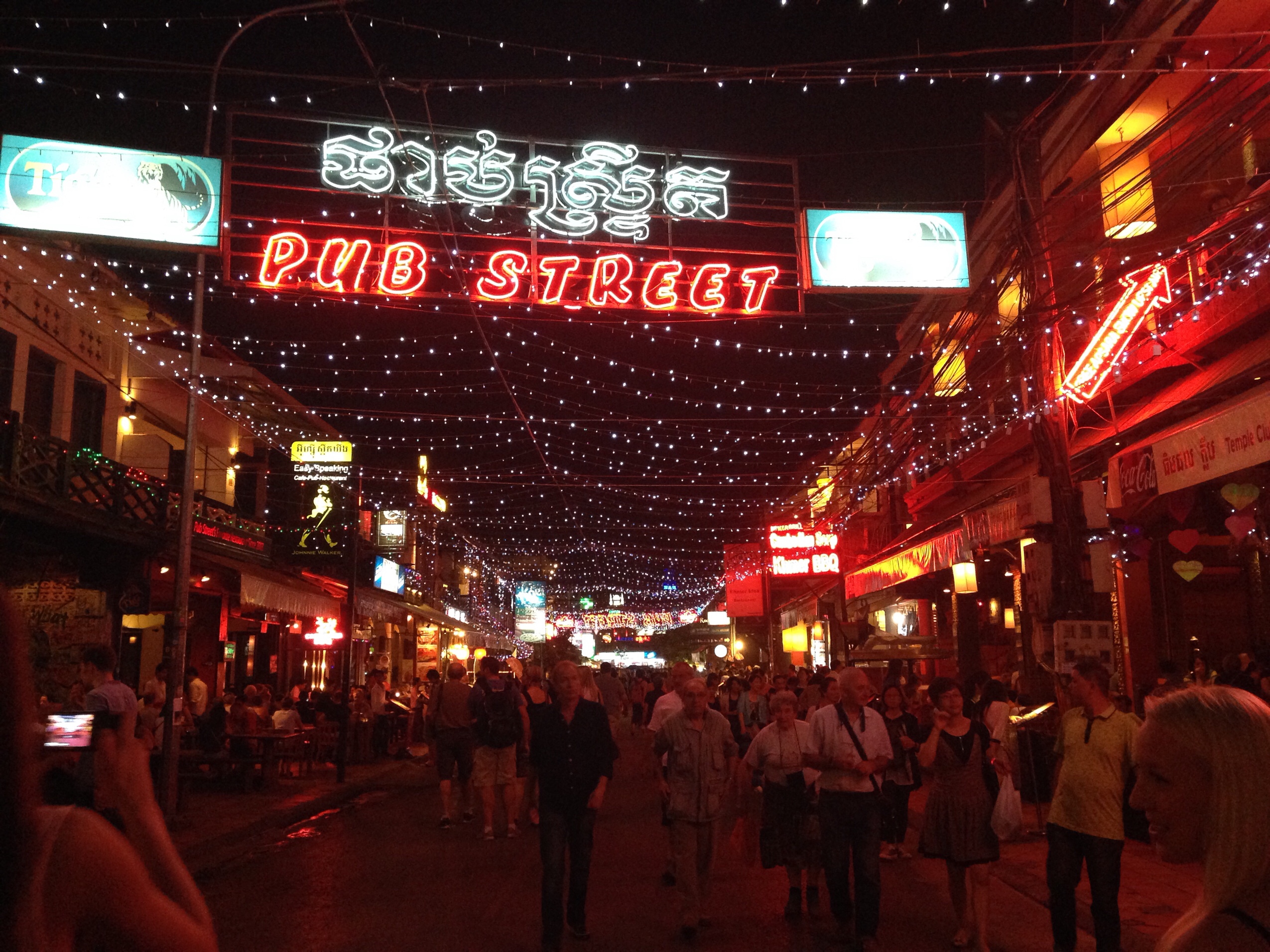 There are also night markets where I ended up buying quite a few clothes and during the day lovely cafes and places to chill.

Siam Reap is also the gateway to explore Angkor.

The famous Angkor Wat is actually just one temple in an enormous complex of ancient sites.

We got up ridiculously early and got a tuk tuk to watch the sunrise over the temple. It was an incredibly beautiful sight, even though it was slightly misty that day. However, be prepared that there will be hundreds of other tourists there doing the exact same thing! You can be standing around for a while and it was incredibly hot, but when you first see the sun appear over the temple it is just such a magical moment.

We had booked a two day ticket, so could explore the sites over the two days. You will need a tuk tuk to get around some of the temples, as they are much further apart than you think.

Our first temple, post sun rise, was Ta Prohm. Most famous for being the setting for Tomb Raider. Again, if you think you are going to be alone, think again. A queue forms to take photos of the famous shot of the tree growing over the temple. It may sound like I didn’t enjoy it, but there is a reason so many people come to visit. Every corner I turned around elicited a ‘wow’ from me. Seeing nature start to reclaim these places is just the most beautiful thing. 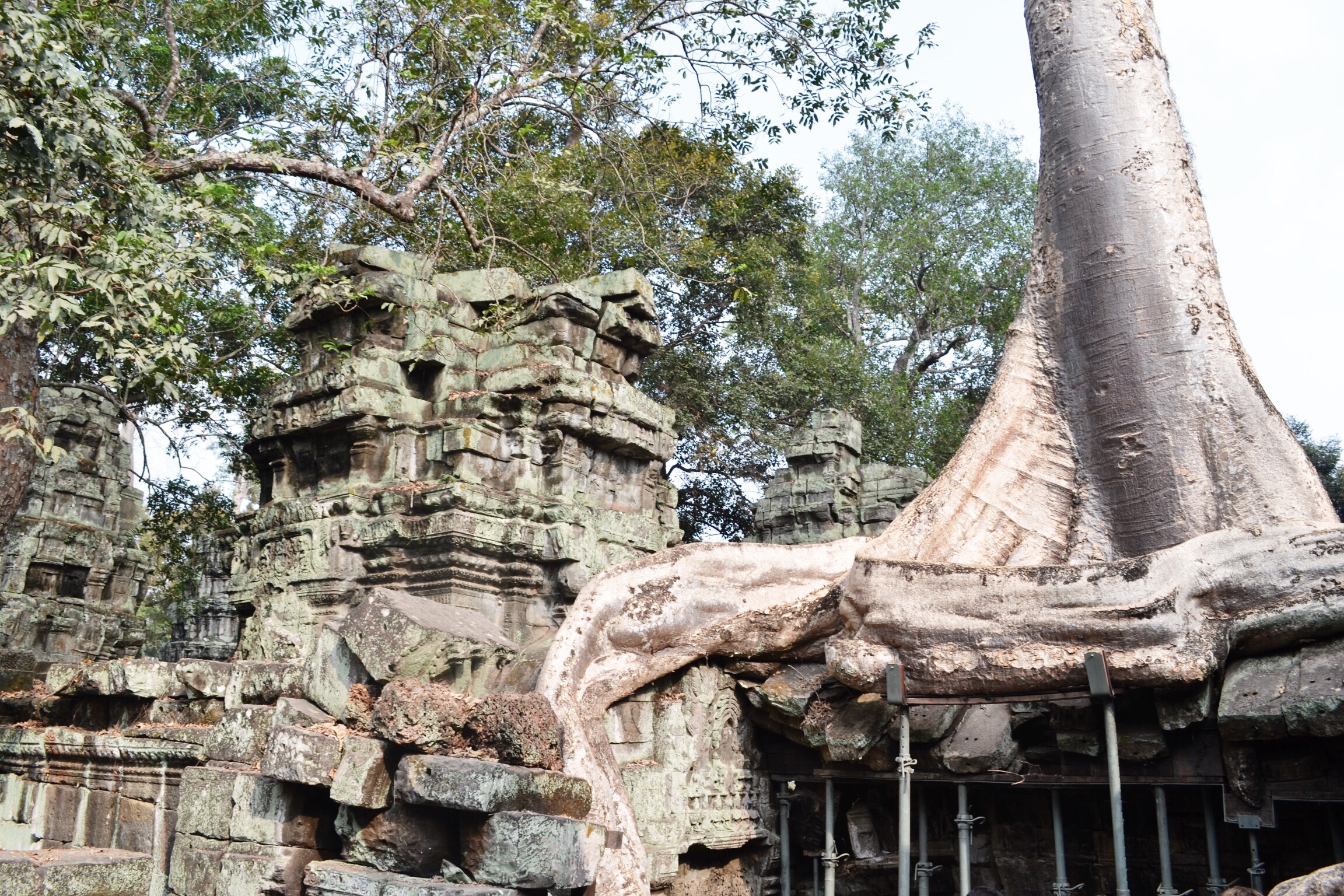 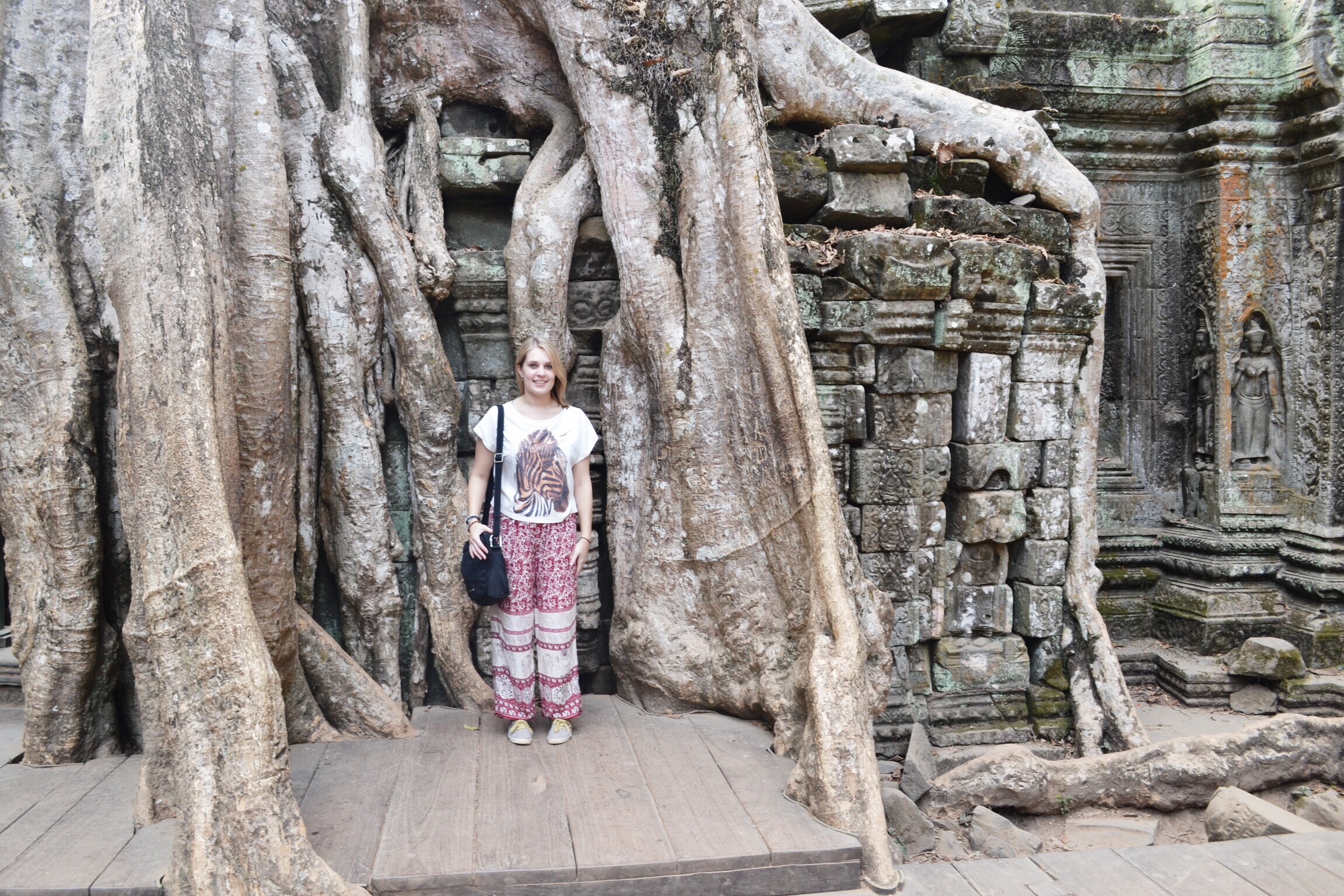 A couple more temples were visited in the morning, one full of statues of elephants and the other a crematorium! Climbing up afforded the most amazing views over the jungle.

Exploring Angkor Wat itself was how the afternoon was spent. Battled through heat exhaustion at this point but it was so worth it. The views from the top were something else. 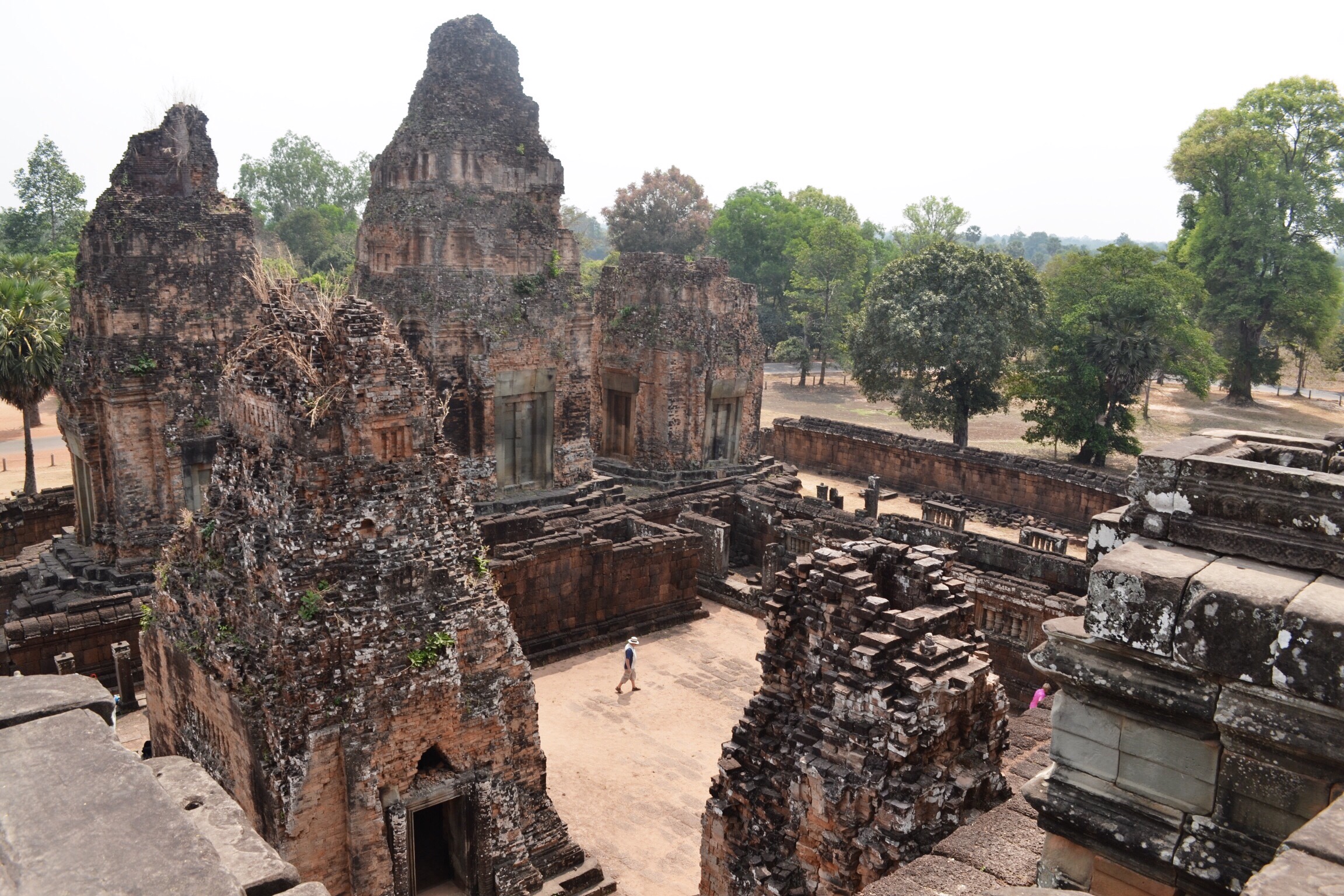 The next day was slightly cooler, thank goodness, so I set off renewed for another day of temple seeing! Firstly we visited Angkor Thom – the old city and saw the temple Bayon. You can explore inside and it is such a maze. Also visited an old palace, Baphuom, and although nothing is know about this place – there are steps to the top and it is the perfect place to sit and reflect. 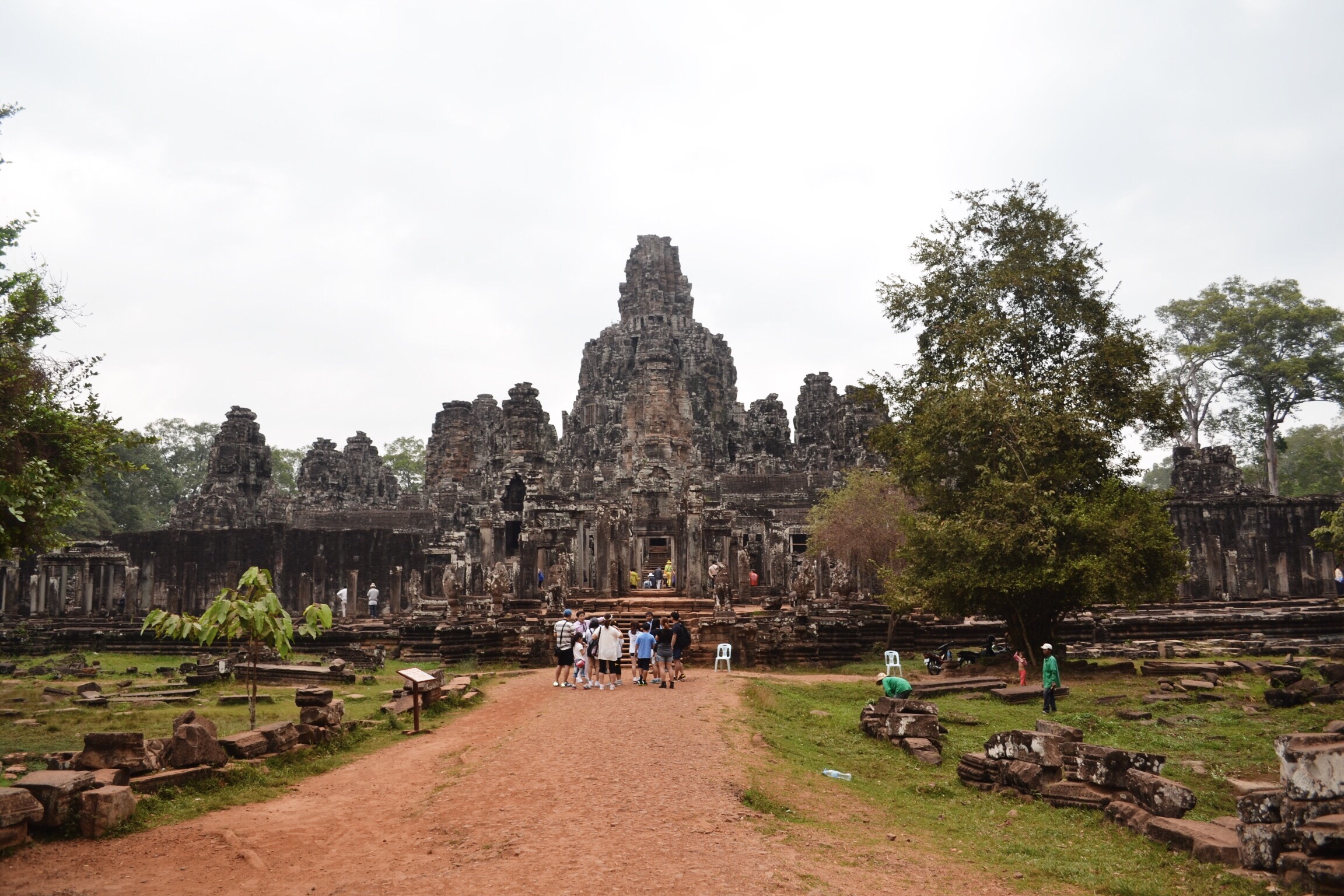 One thing to note – beware of the monkeys, as cute as they look. They are quite vicious. We saw one having a fight with a rather large lizard. 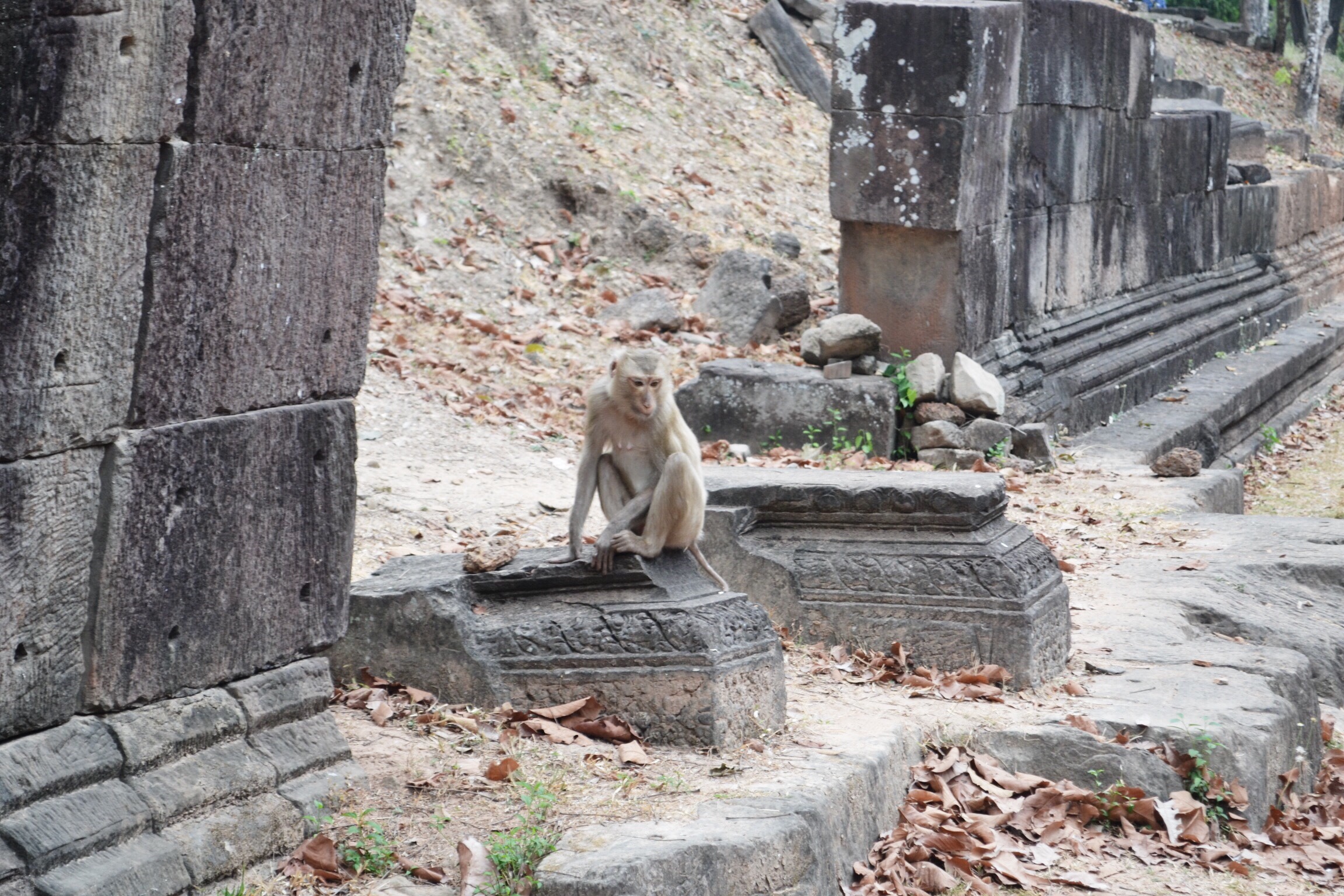 I won’t list all the other temples I went to and honestly by the end of the two days I did feel I had seen enough! However, this was one of the highlights of my time is South East Asia.

I understand the price of visiting here has now gone up, so if you are strapped for time and want just spend one day visiting the three I would recommend are: Angkor Wat, Angkor Thom and Ta Prohm. A guide will also be totally invaluable, for learning about the history and significance of each place.

I think what I loved most about my time in Cambodia was the contrast of histories, with two incredibly important events. One surrounded in mystery and surviving for approximately 900 years and the other far to recent to even seem possible. The people were so friendly and welcoming and always happy to help. What a beautiful country and somewhere I feel changed me.

Have you been to Cambodia? Let me know any recommendations for where to go next. 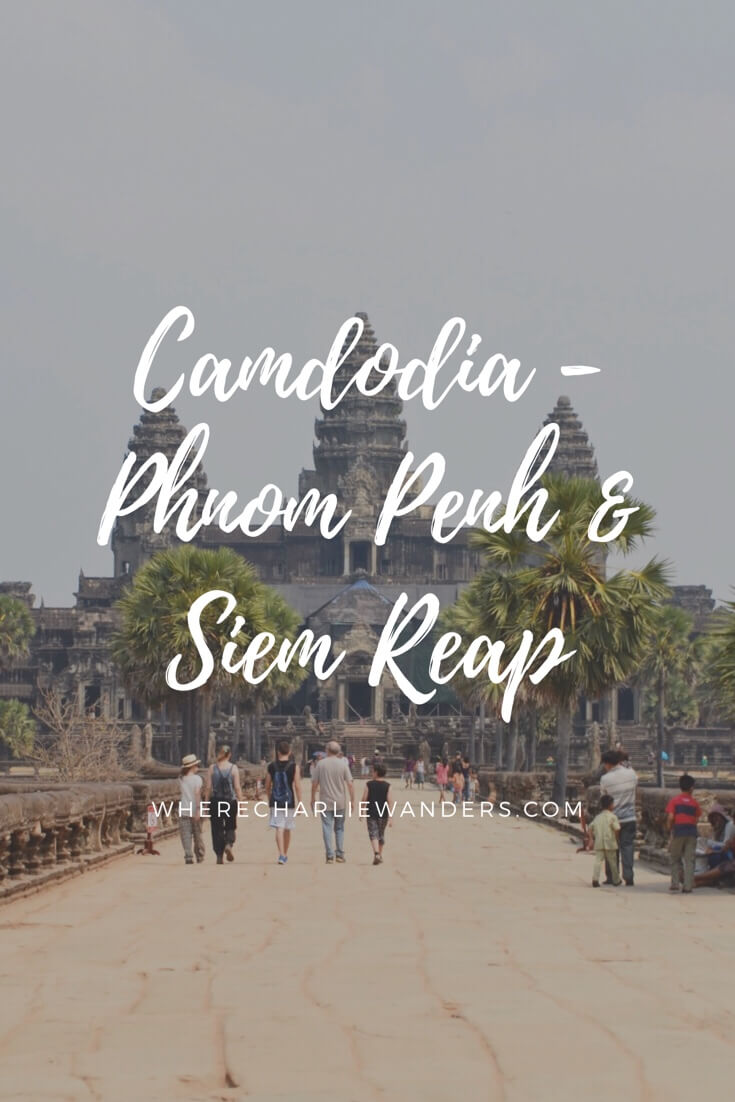 Cambodia is so versatile and an exceptional travel destination, Charlie! Both, Phnom Penh and Siam Reap seem truly astonishing. Riding in a tuk-tuk is an unforgettable experience! 🙂

Thanks for sharing, I went to Camdodia about 6 months ago, and found it a lot different from what I was expecting. I got to see a lot though 🙂