Any trip to Uganda should include visiting Jinja. A town in Southern Uganda, on the shore of Lake Victoria.

Just outside of the town of Jinja is access to the river Nile. 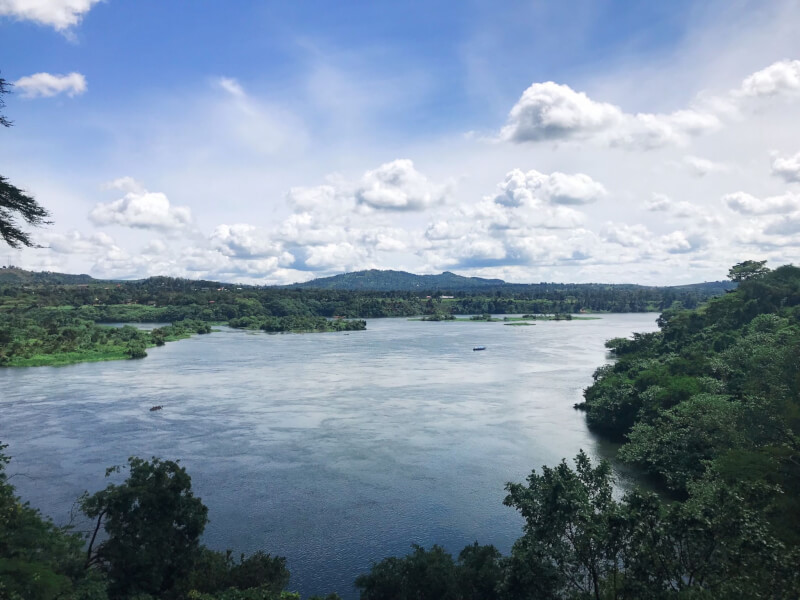 It is famous for amazing white water rafting, but there is also so much more this place can offer. The original rapids, which attracted tourists, are no longer in existence. The government built a new dam, flooding the area. This, of course, affected the locals who lost land, but also businesses offering rafting. A new location of rapids is now used, but this is also set to be reduced due to the building of yet another dam. Previously a full days rafting on grade 5 rapids, will now be a half day on grade 3.

The worst part is, the electricity currently generated by the dam isn’t even going to Uganda. It is being sent to Kenya, to pay off the debts.

The locals are understandably quite worried about the effect this is going to have on the tourism and businesses. So I wanted to write this blog post to encourage people to go to Jinga. There is so much on offer!

I actually didn’t go rafting and was still spoilt for choice with what was available. I stayed at the lovely Nile River Explorers, and they helped arrange all the activities.

There are different accommodation options available to suit all budgets. As I was on the G Adventures tour, we had camping included. However some of the group decided to upgrade. The camp has everything from Safari tents, dormitories to ensuite rooms. Have a look at the options here. 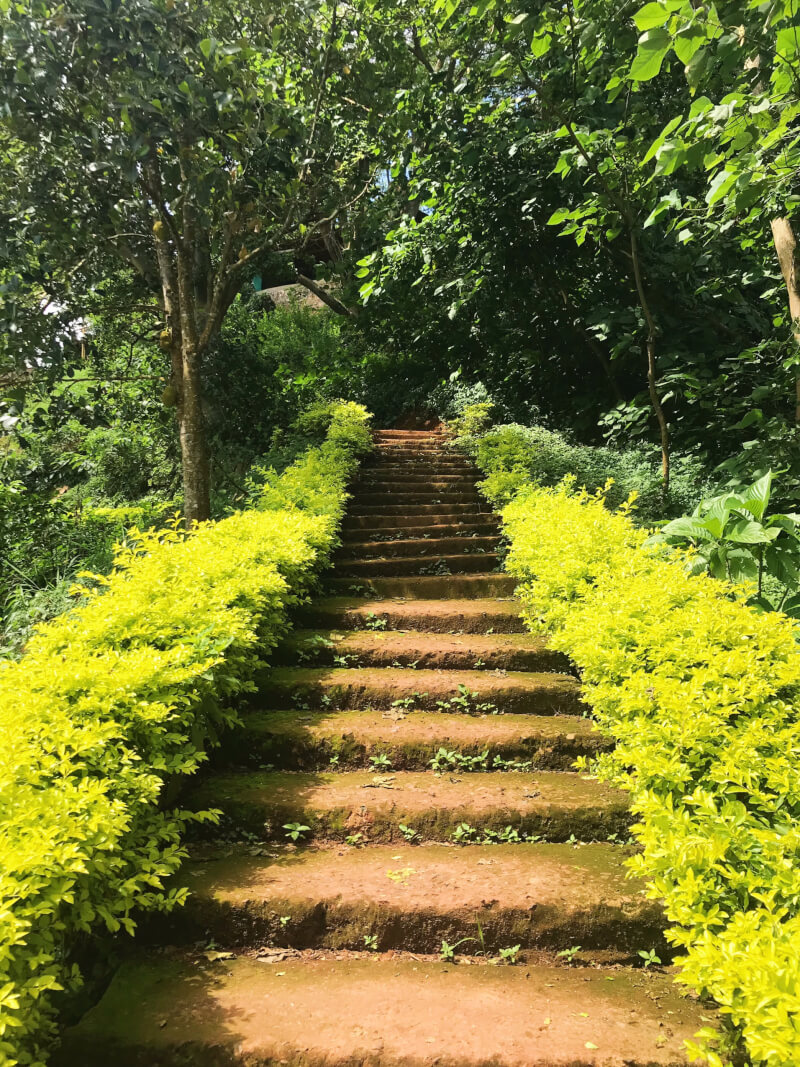 It was a beautiful setting on the banks of the Nile, just outside of Jinja. There was a restaurant and comfy seating area. Also one of the best shower rooms I came across in Africa. It even had hot water! I hadn’t had a hot shower for nearly two weeks at this point, so it was a luxury.

Also home to some local monkeys! 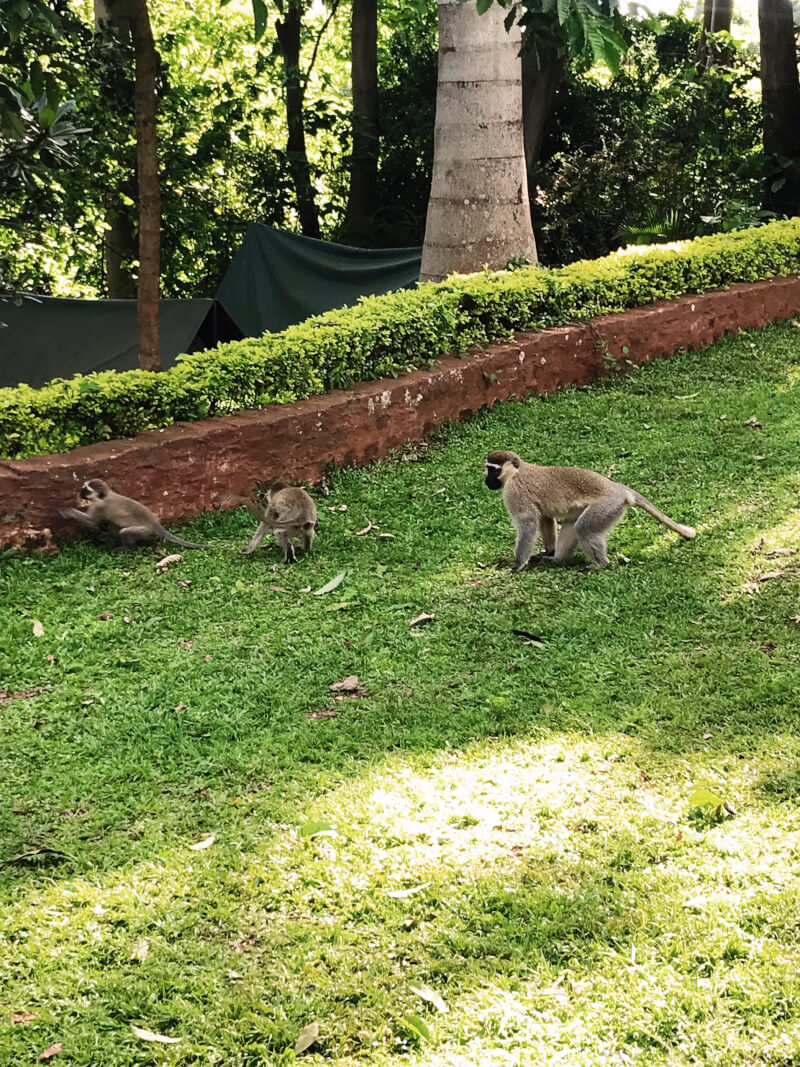 Plus, as I mentioned, the camp organised all the fantastic activities. The entire group had an amazing few days, with different levels of activity.

The evening we arrived, we all decided to take a cruise down the Nile. Climbing down the very long flight of steps, we boarded out boat for the evening. Absolutely beautiful scenery. And the best bit was I actually managed to take some photos before the gin from the open bar kicked in.They also provided plenty of food! Probably a good idea to try and soak up some of the alcohol. 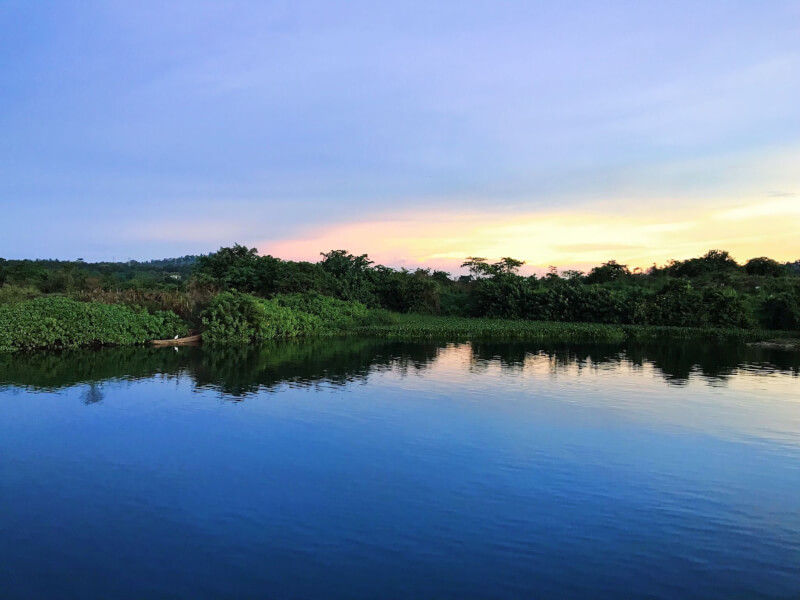 But if you are anything like me and have always dreamed of seeing the Nile, this is a wonderful way to do it! 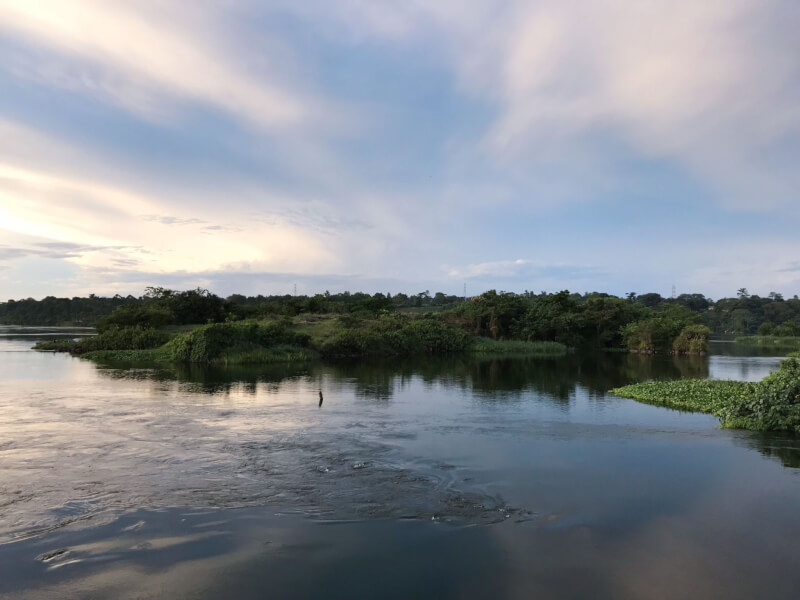 Now, lets be totally honest here. This wasn’t my favourite activity in Jinja. In fact, I had a total sense of humour failure. I am not sure why I thought I would enjoy it, especially on a hangover. 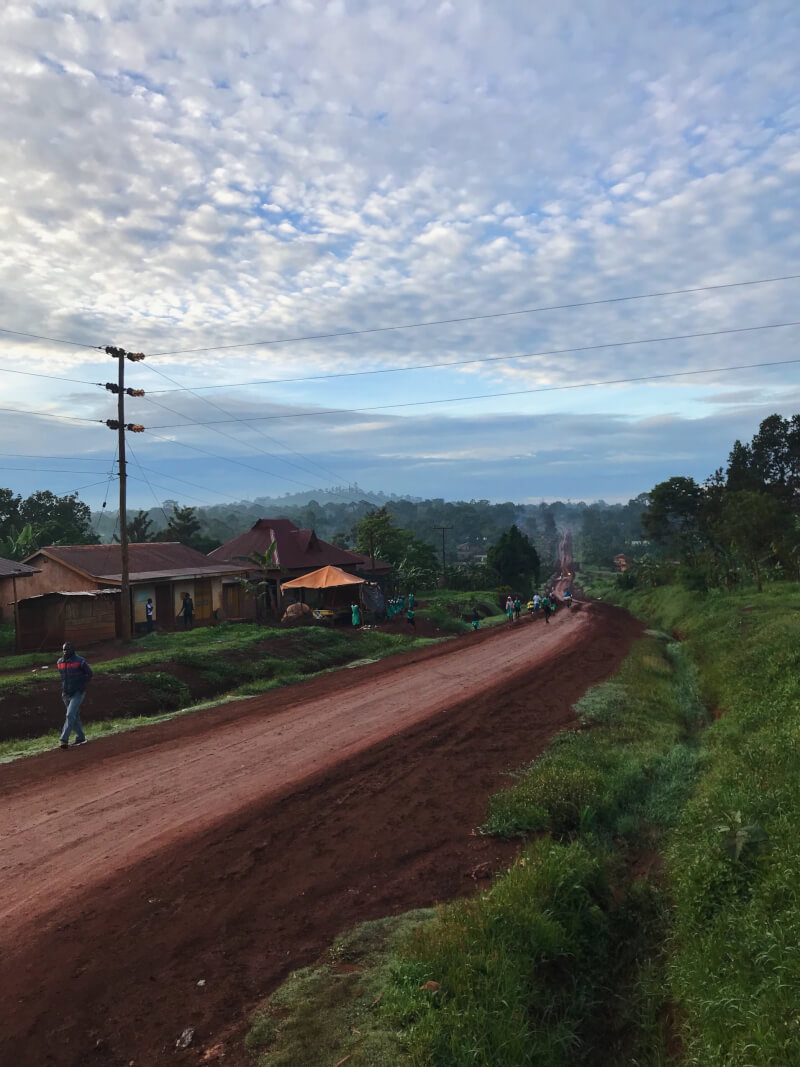 However, I was with two others who both thoroughly enjoyed it. So I am going to write this from their perspective, as clearly it does appeal to some!

It had rained a lot the night before, which had turned the roads into a major mud bath but this added to the hilarity. I think the terrain would have been a lot easier if it was drier. 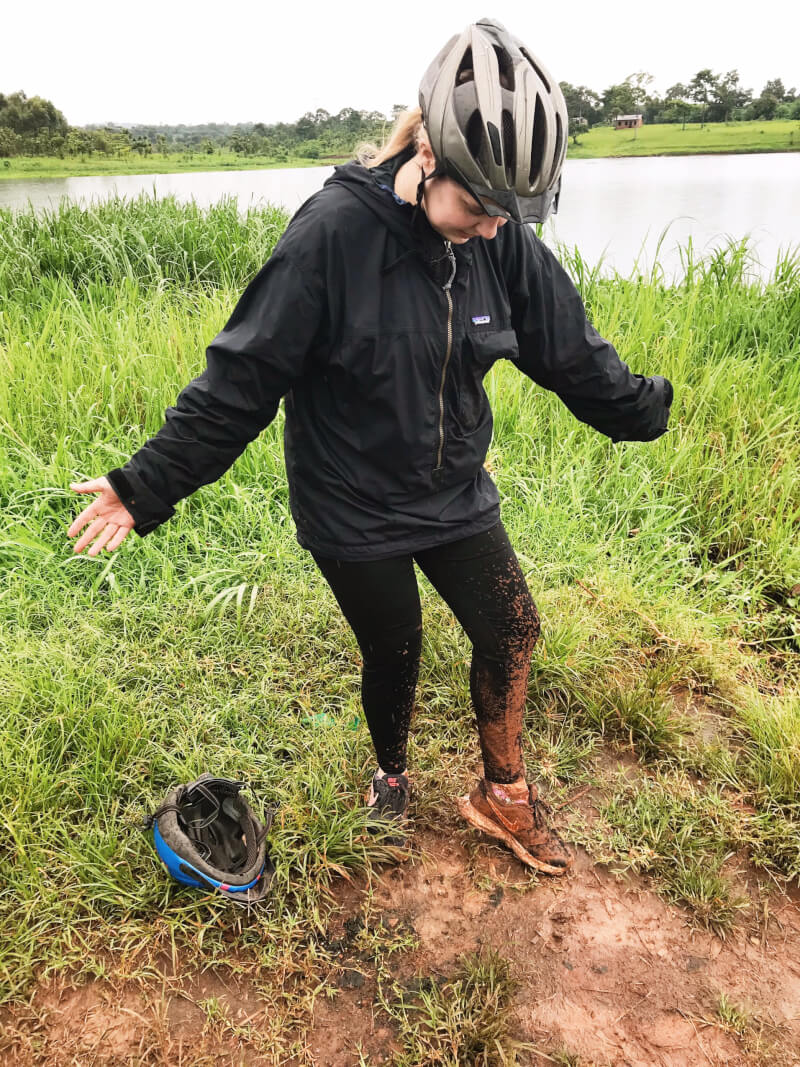 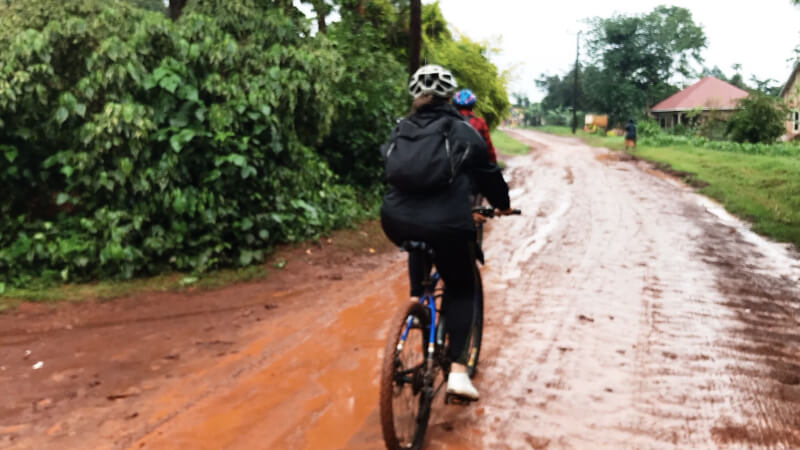 It was lovely, as it meant getting out and about in the local villages. Our guide took us on a wonderful tour which encompassed cycling through the villages. We also saw local farm fields. The highlight was reaching the bank of the Nile. Here we saw the dam which had previously destroyed the rapids.

My absolute highlight! I previously used to ride a lot and really miss it. Last year I got the opportunity to go horse riding in Mongolia, and remembered how much I loved it. So I was really keen to be able to do it again in Jinja.

While this was booked through Nile River Explorers, it was run by Nile Horseback Safaris. 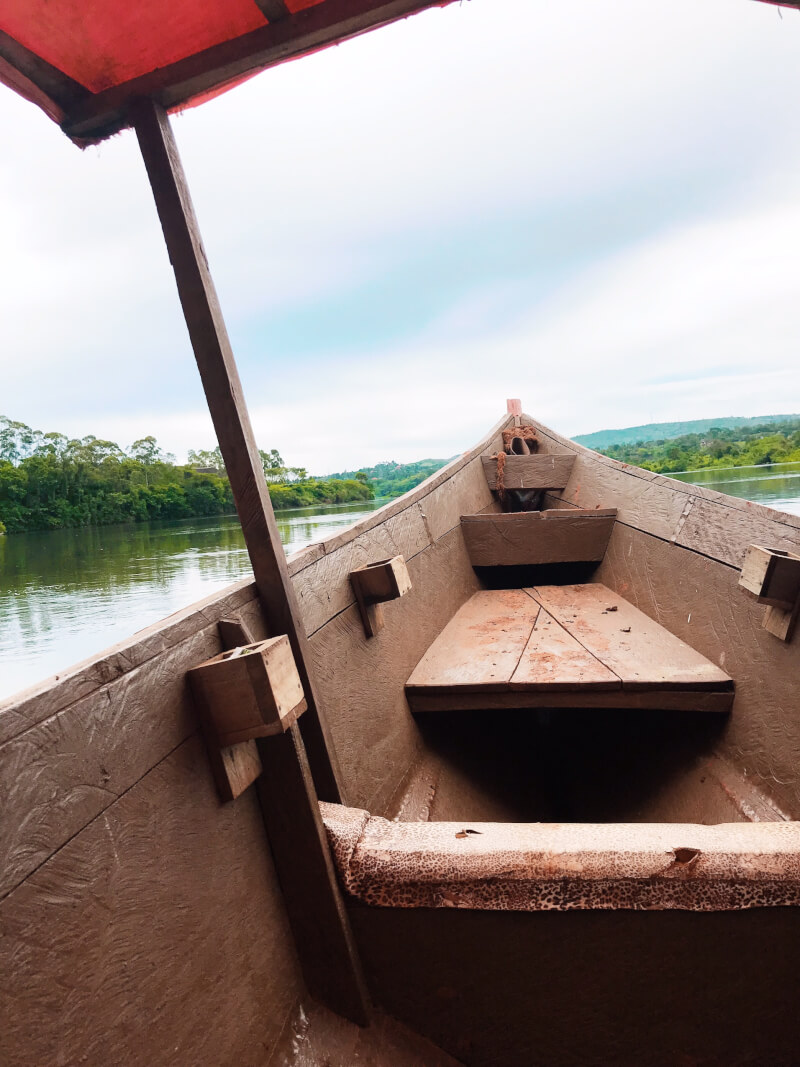 Nile Horseback Safari was run by an Australian who has been living in Jinja for nearly 11 years, and it was a great set up. He was good at putting us at ease, and happy to accommodate all levels of horse riders. We decided to go for 2 hours, but they offer everything from 1 hour to multi days horse safaris. If I had more time, I would have loved to have gone a long horse back safari.

Our guides were excellent, one in front and behind. They were also happy to split up when I wanted to go for a canter. One guide stayed with me, and the other remained with the other two. They also made sure the coast was clear when rouge cows were trying to bait the horses. 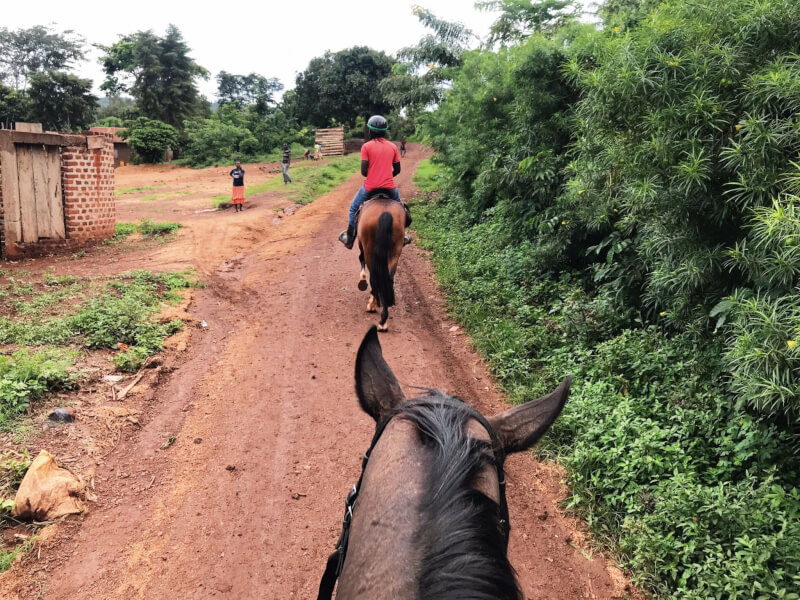 It was a lovely way to get out in to the village and explore some of the surrounding countryside. It involved a lot of waving to children and a lot more being called ‘Muzungu’. This is the name the locals call white people. It is from the Swahili word meaning ‘wanderer’ or ‘traveller’. Early European missionaries were known by this term, as they moved around a lot. Now it is used widely as a term for foreigners or white people, because of our perchance for travelling. I love the term. 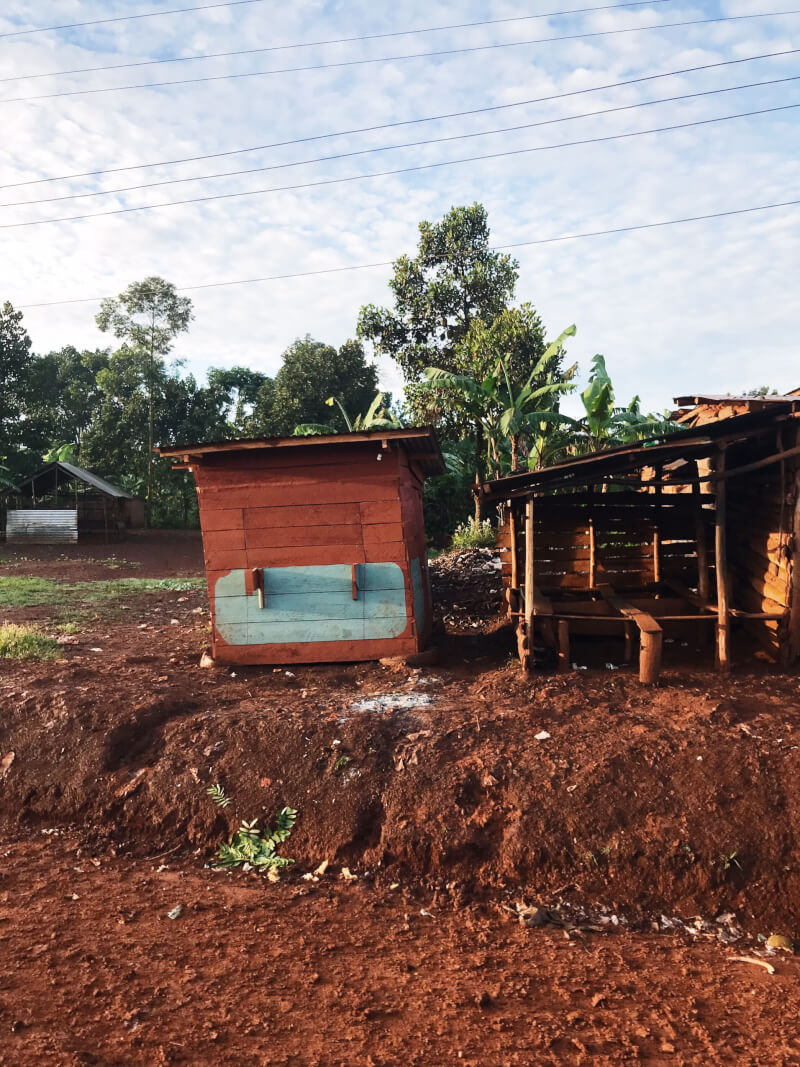 The ride ended with a view of the Nile. We then scrambled back down the river bank to the boat back across the river. 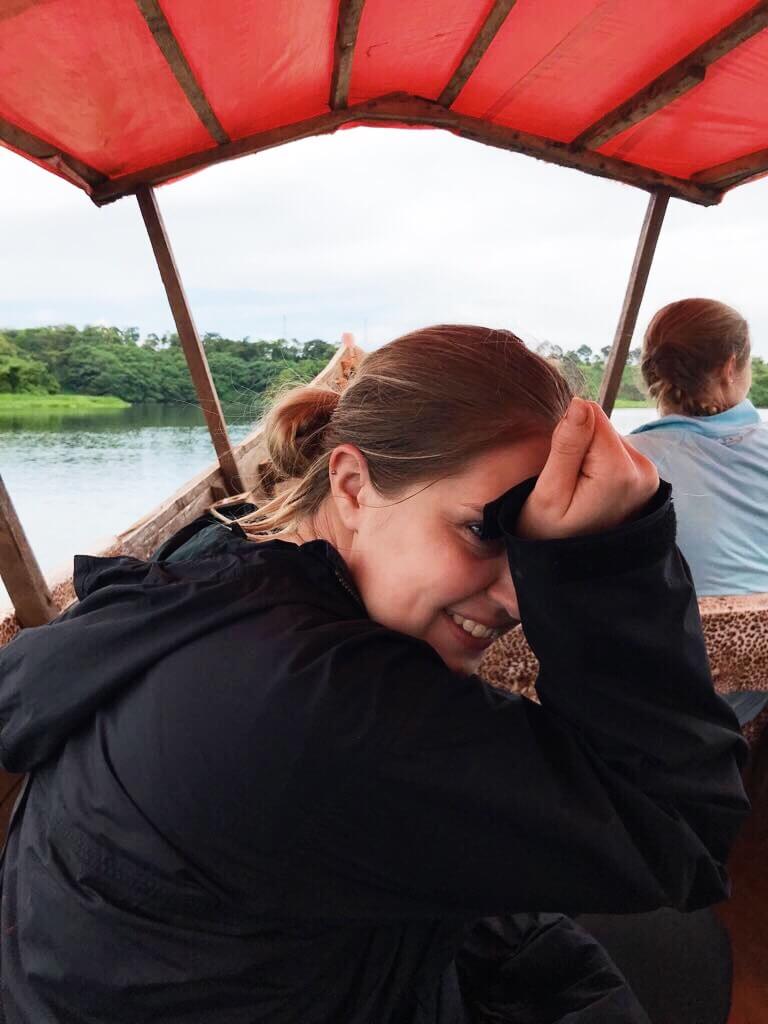 For those who weren’t feeling quite as active, the hotel had an amazing beauty treatment menu. 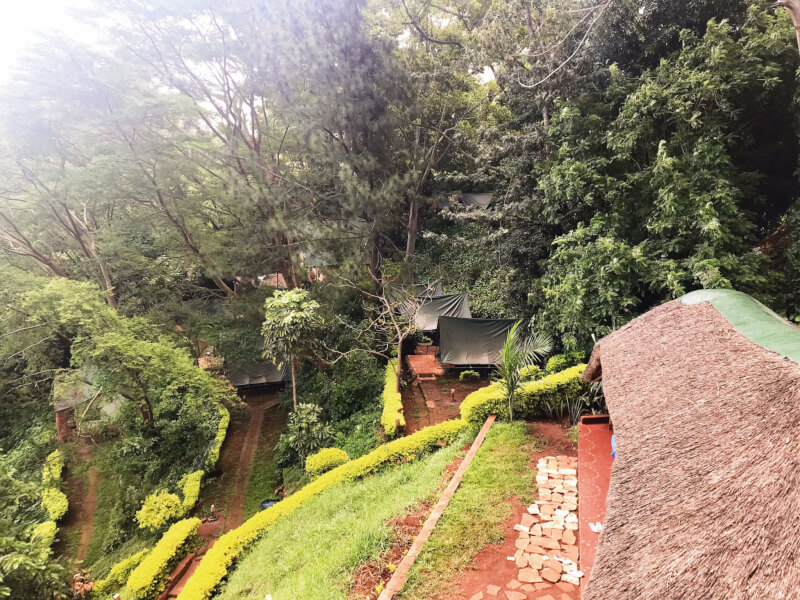 I managed to squeeze in a back, neck and shoulder massage and a pedicure. Both were amazing and I have never had a treatment with a view quite like this. 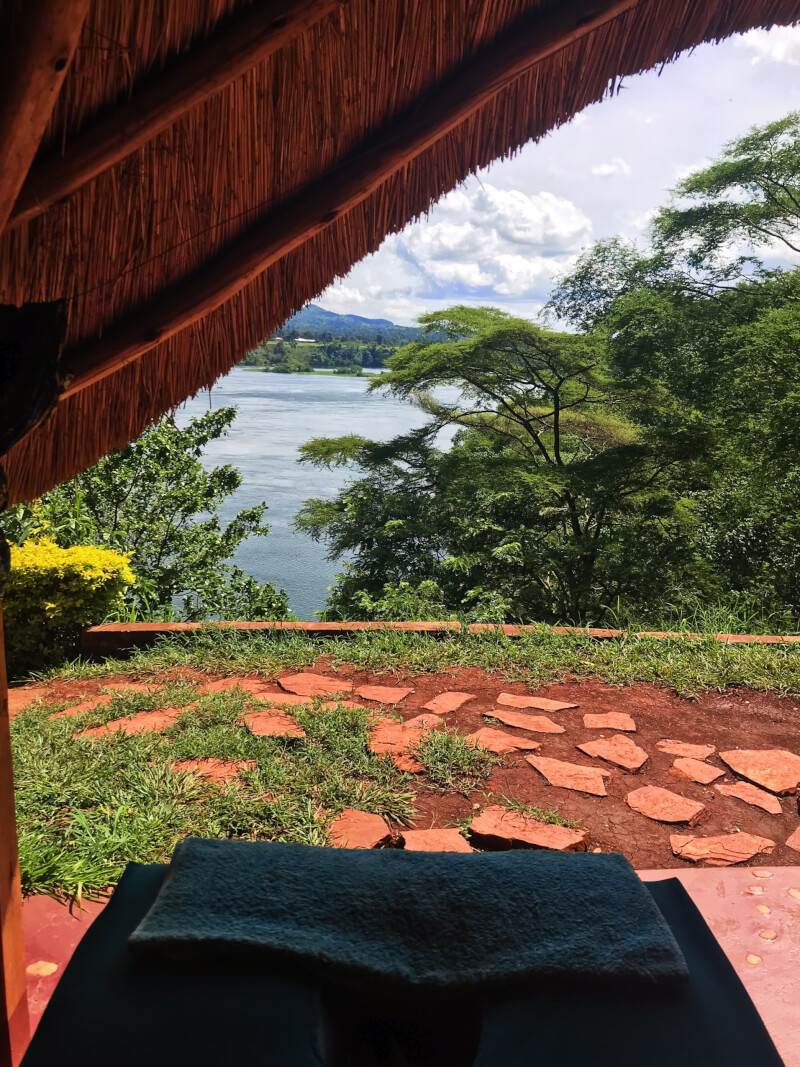 There were plenty of other things on offer that I just didn’t have time to do. these include quad biking, kayaking and fishing safaris. Nile River Explorers also have paddle boards which you can take out when you want. Plus, with such beautiful surroundings it is the perfect place to relax with a book. They have a selection in reception. 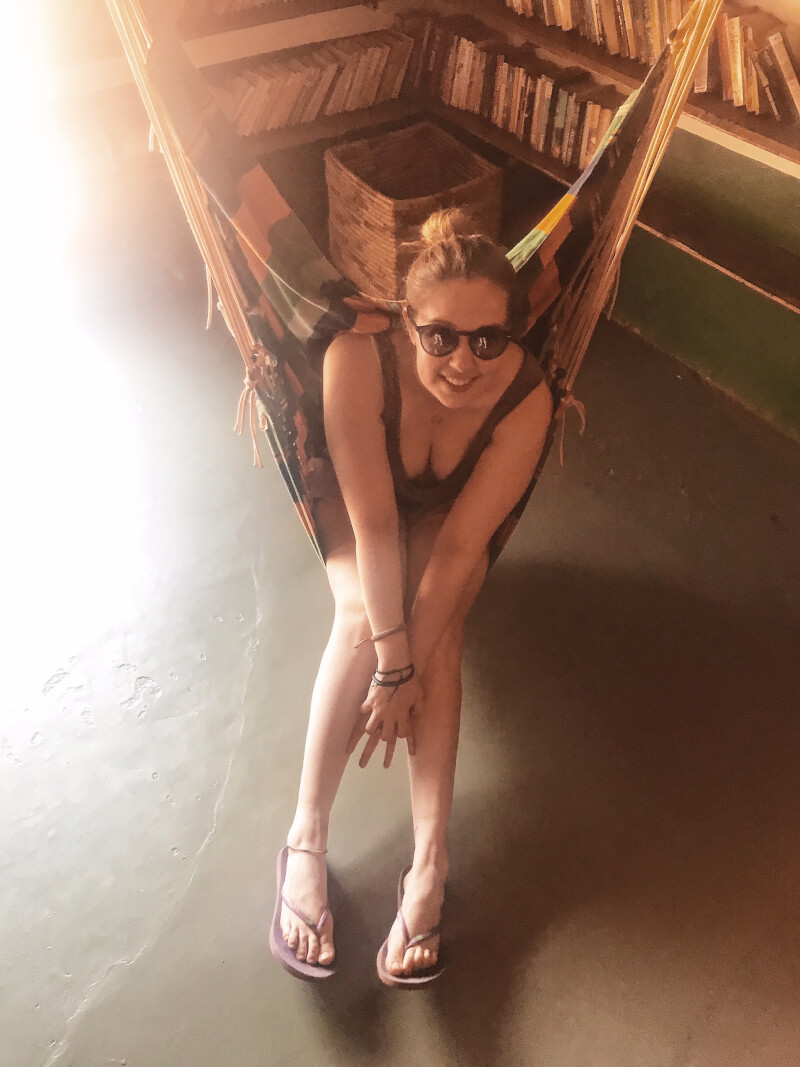 Of course, this is what Jinja is famous for. Those in our group who did decide to go, said it was amazing. Even on a hangover. You get collected in the morning and taken down river to the rapids. The day also includes lunch. These rapids are said to be some of the best rapids in the world. 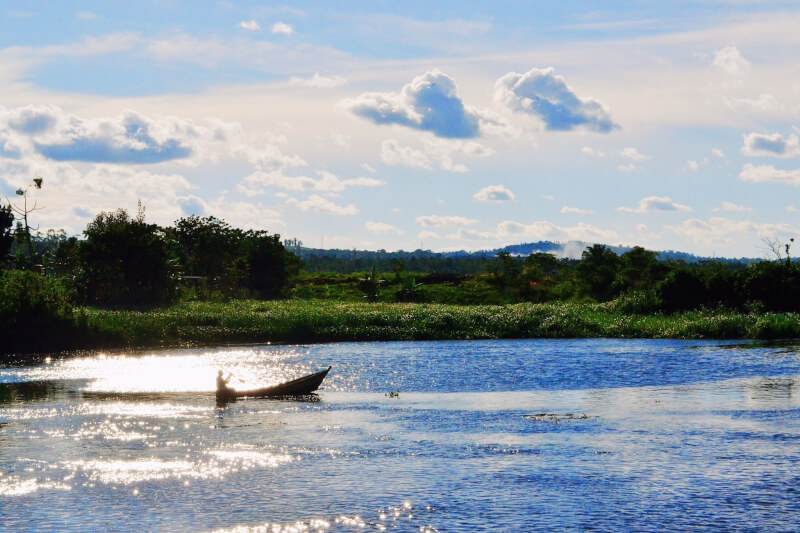 Well, I went in rainy season and it really didn’t matter. It rained in the night but was dry nearly all of the days. All I cam say, with so much to do, just go!

Do you like being active when you travel? Where would you head? 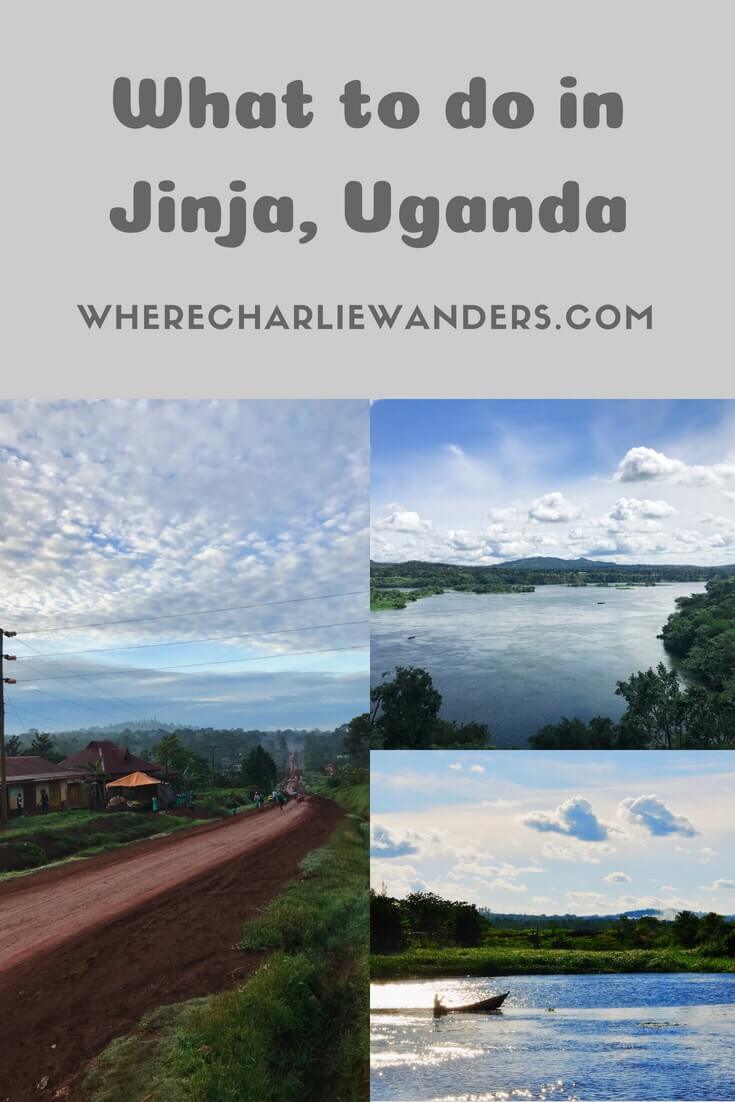 Why you should visit the Natural History Museum

Why I love Menorca

Looks like an amazing place to visit – your photos are wonderful. Relaxing on the Nile sounds enticing but I’m with you on the muddy cycle ride!

It was such a beautiful place! Would have loved more time there to relax more and also mountain bike a little less!

This looks amazing, and such beautiful photos. I’d love to come here tbh but it will be a while till I can get to this part of the world – always so many exciting things in front of us 😍

How amazing! Some of our friends just told us they are moving to Uganda, so I was very curious about the country and here your blog post shows up! Now I want to visit Uganda, it sounds awesome!
THanks for a great description of Jinja!

How perfect! You’ll definitely have to go – I went to see the gorillas as well. And it was just amazOMG!

Sounds good! It now is on my bucket list!