11 things to do in Berlin

Berlin was somewhere that had never been particularly high on my bucketlist, but everyone I knew who had visited had had such a great time. I found Berlin to be unlike any other city I have visited, it was modern, sprawling and not exactly beautiful. But I absolutely see why people want to keep returning. So, I wanted to put together my list of my recommendations of things to do in Berlin.

Things to do in Berlin

I feel like I am the biggest advocate of free walking tours at the moment. But honestly there is no better way (in my humble opinion) to get to know a city, than a free walking tour. The guides work for tips only, so their utmost to give the best tour.

If you are short on time, it gives a really good overview. If you have a bit more time, it is the perfect way to work out what you want to spend your time seeing.

The one in Berlin starts at the Brandenburg gate, and covers so many of the key sights I wanted to see in Berlin. Take a look here.

2. Get to grips with public transport

Berlin is a city that I felt didn’t necessarily have a ‘heart’. A lot of the places you want to see aren’t particularly close to each other. So to maximise your time, and to cover many things to see in Berlin, it is definitely worth investing the time to work out the systems of buses, trains and trams.

You can by a day a ticket for €7,70 so definitely beats getting Ubers around the city. It is quick, efficient and definitely the best way to get around.

An absolute classic and iconic monument and is of course a ‘must’ on any list of things to do in Berlin. 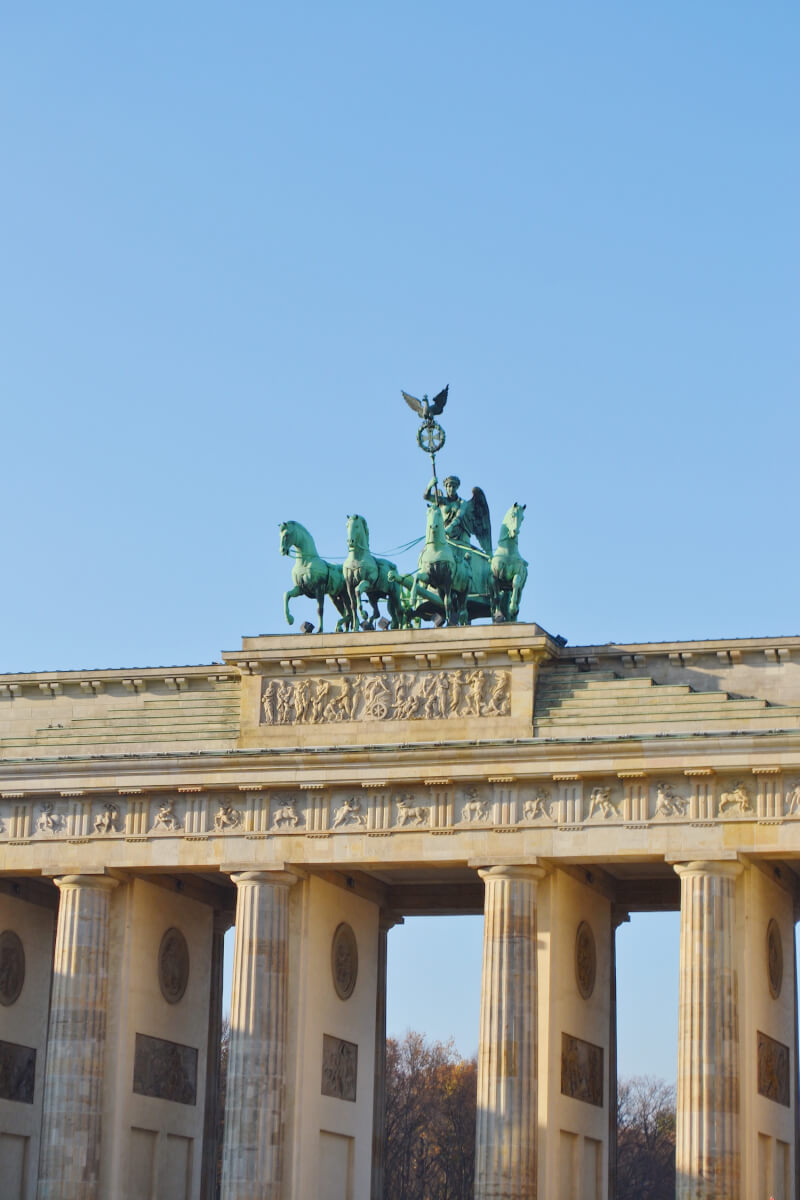 Unless you are there first first thing in the morning, it is going to be full of lots of tourists. Prepare yourself for it. But actually I think that’s ok. When I visited they were about to start a protest, so there was a large screen erected in front of it which was sightly more annoying however.

Standing since 1791 and definitely Berlin’s most famous landmark. The statue on top was actually stolen by Napoleon and he took it to Paris. Upon his defeat it was returned to it’s rightful position.

4. Visit the Memorial to the Murdered Jews of Europe

I think this is a absolute must on a list of things to do in Berlin. This beautiful momument is series of grey blocks, at varying heights set into the ground. You can walk through the blocks. I found it so peaceful, and a lovely place to reflect. It was also incredibly moving. 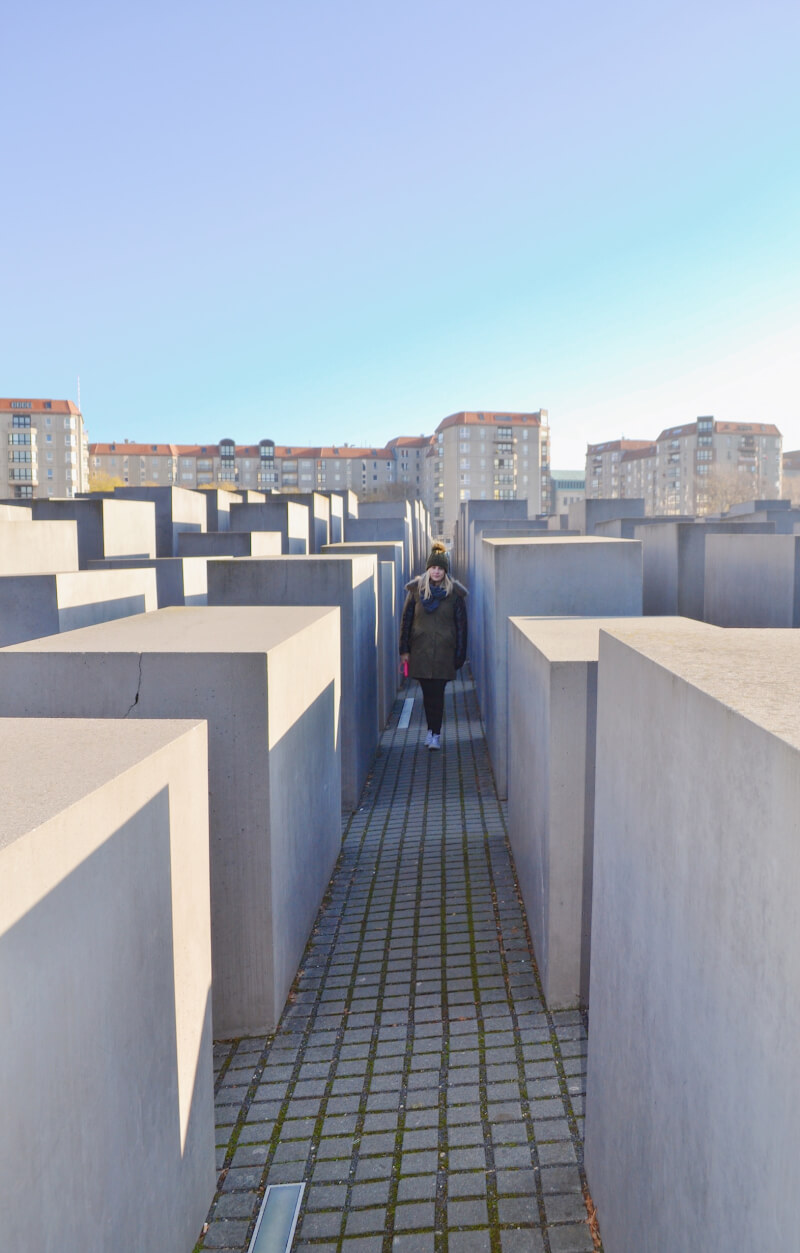 The architect who designed it said, on how it should be interpreted, is that ‘it is what you want it to be’. The museum was unfortunately closed on the weekend I was in Berlin, but I have heard it is also important to visit.

Because what would a good weekend break be, without brunch? I was in Berlin for three days, and had two.

First we head to Father Carpenter. It was a trendy place, with a massive focus on both avocado and eggs. Good for vegans, and with high wooden tables to sit at. Its a good way to start the day.

The second place we visited was my favourite – Factory Girl. Located in the Mitte area of the city, it was a quiet walk fairly early on a Sunday morning. It had a great menu with lots of choices of eggs, meat and veggie options.

They operate a sharing table concept, so you might not get a table to yourself but I didn’t mind this. With comfy, low chairs and yummy food I could have sat there all day. Shame we had a flight to catch! 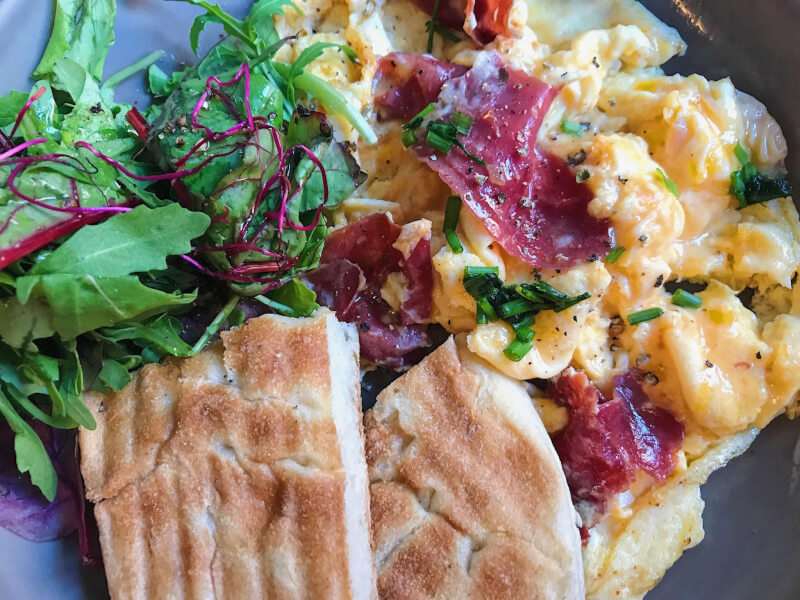 Their signature is the Coco Anjéla. A mix of almond milk, some eggs, chocolate and fruit. Mine had raspberry in it. It was very sweet, and unlike anything I had ever had before. But surprisingly delicious! Very unique, and something definitely to try if you are having brunch.

This beautiful park is located in Central Berlin. But at 210 hectors in size, it feels like you could be in the middle of the countryside.

The noise of the traffic disappears and you are surrounded by beautiful trees and woodland. It was November when I visited, so there was that beautiful late autumn feel in the air. I could have spent hours walking around the park, sitting and watching the people enjoy their weekend.

In the centre of the park is the roundabout which contains the Berlin Victory Column. It needs to be seen, and it is even more beautiful at dusk. 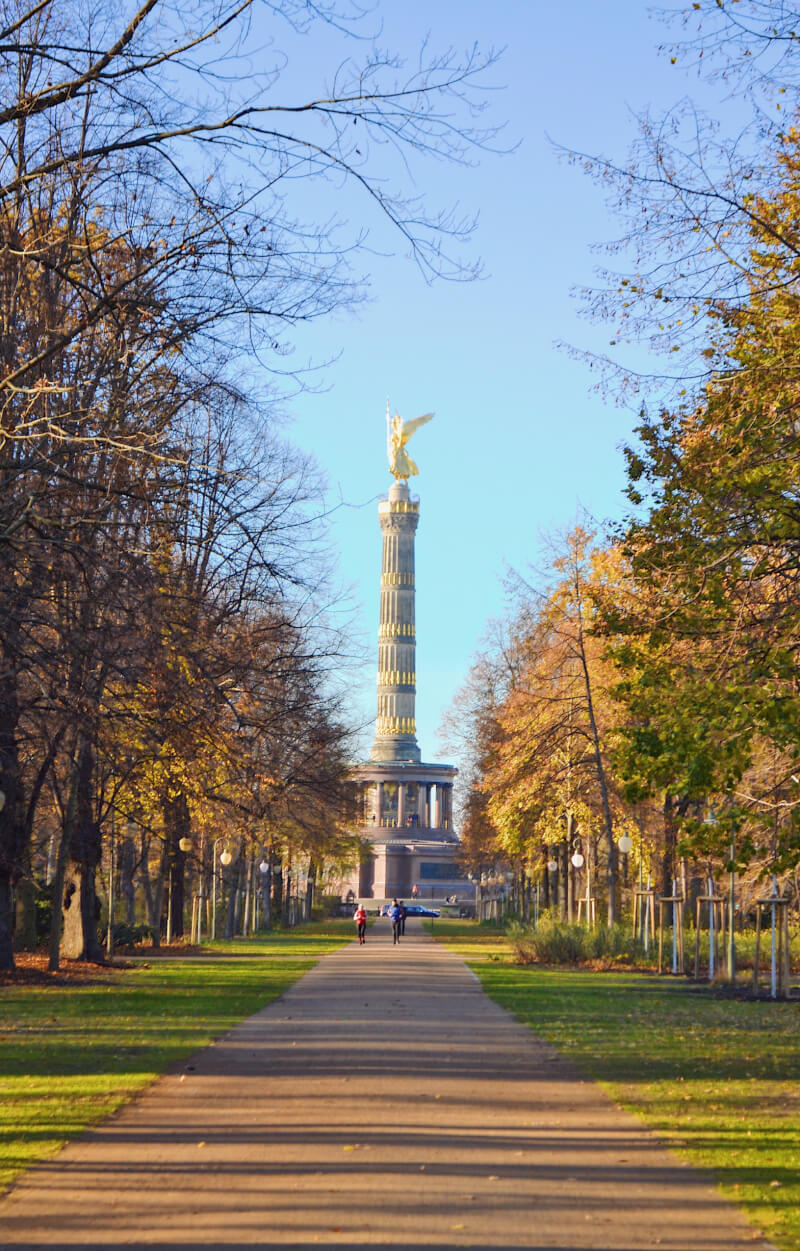 After getting your steps up walking around the park, a lunch is absolutely in order. The cafe inside the park, Cafe am Neuen See, definitely provides the perfect place. We hadn’t made a reservation and were lucky, it was also slightly later when we stopped by, but I would say it would be wise to make one. 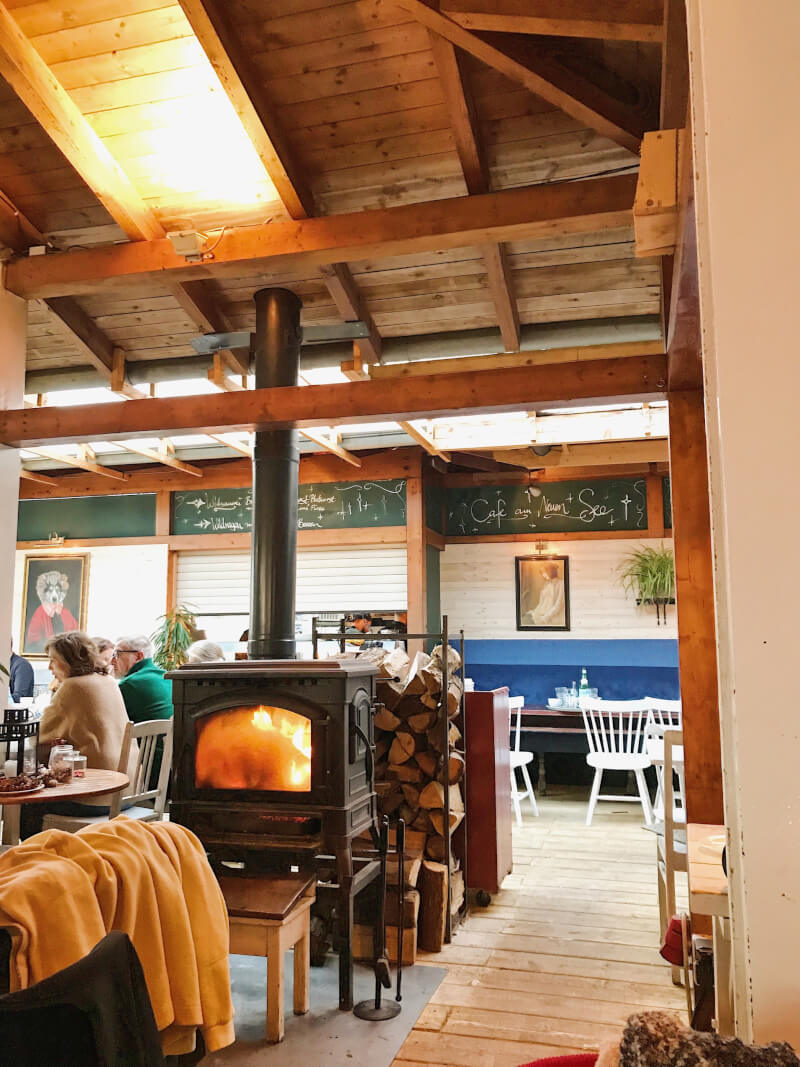 The wooden room is filled with rustic tables and chairs and lots of fires burning. On a cold autumn day, it was just like big warm hug. The menu has wood fired pizza, as well as local German dishes. With plenty of wine and beer to choose from and apple strudel for pudding, it is the perfect lunch stop.

Touristy as hell? Oh absolutely. But you know, I was a tourist in Berlin, so why not? We headed to Hofbräu München, which is a huge hall set up to be like an all year round Oktoberfest. When we arrived they asked if we had a reservation, we didn’t and were told it could be a wait and a chance. Luckily someone didn’t turn up, so we were in! But I would recommend booking. 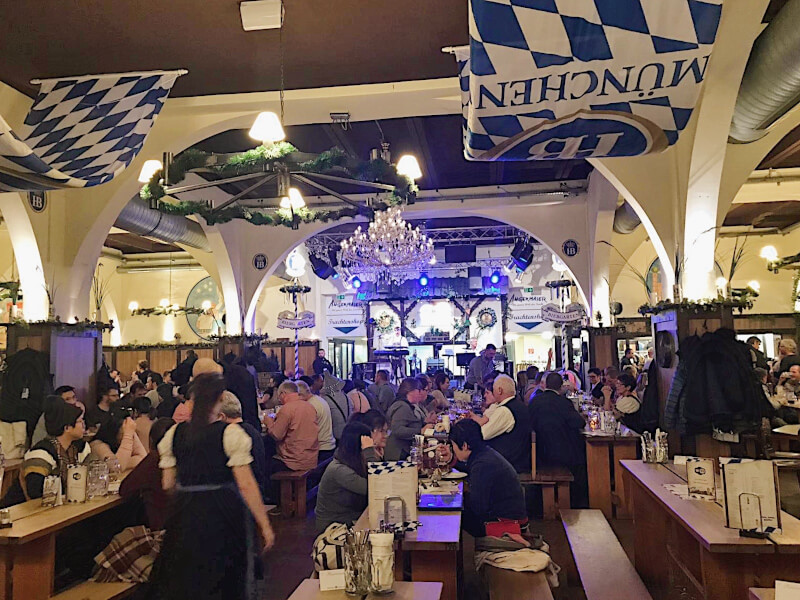 The beer if fairly cheap 4,50€ for a 0.5L tankard. The food is slightly pricer, but typically German! There is also live German music nearly every night, and it seems to be where Berliners go for a weekend night out. Definitely crazy, and I loved it!

9. Walk along the East Side Gallery

The East Side gallery was once a portion of the Berlin Wall. It is now the largest open air gallery in the world, consisting of murals painted all along the 1.3km stretch. Located in Ostbahnhof, very close to the River Spree.

There are over 100 murals painted by artists from over 21 countries. It is now known as an international memorial for freedom. 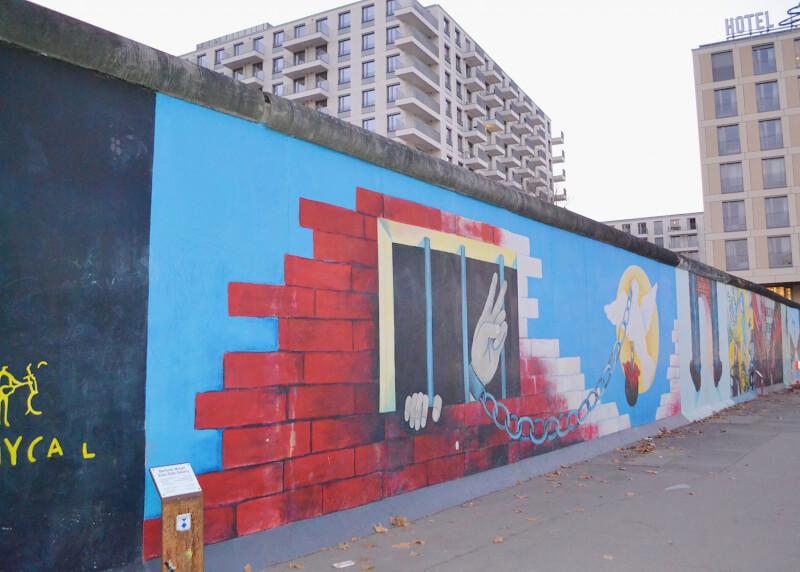 The art work is beautiful and interesting, so do take the time and some comfy walking shoes to stroll along the length.

10. Stare quite incredulously at Checkpoint Charlie

Absolutely not what I was expected. The guide on our walking tour called it the ‘Disneyland of Berlin’ and I can definitely see why. Once the best know border crossing from East to West Berlin. Now, there is a reconstruction of the hut, some Russians dressed up as Americans and a KFC and McDonald’s flanking it. 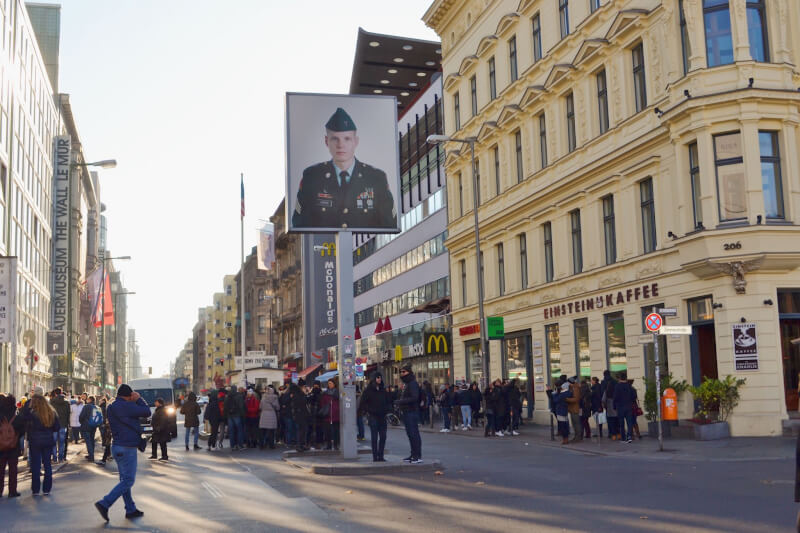 It was interesting to see, just because it’s so crazy to think that one of the most notorious ‘front lines’ of the Cold War once stood here, and now – its a modern playground.

Worth taking a look, but be prepared it is not how you imagine a historically significant location to look!

11. Hang out at Markthalle Neun

Markthalle Neun is located in the artsy neighbourhood of Kreuzeberg. In an old marketplace, built in 1891, it is full of stalls and artisan food stands. On certain nights they host street food festivals.

But even on a normal evening its a great place to wander around and hang out. We walked around having a look at all the local stalls, and watching people buy their groceries. After stopping in one of the traditional photo booths for a quick snap, we decided to have a couple of beers. 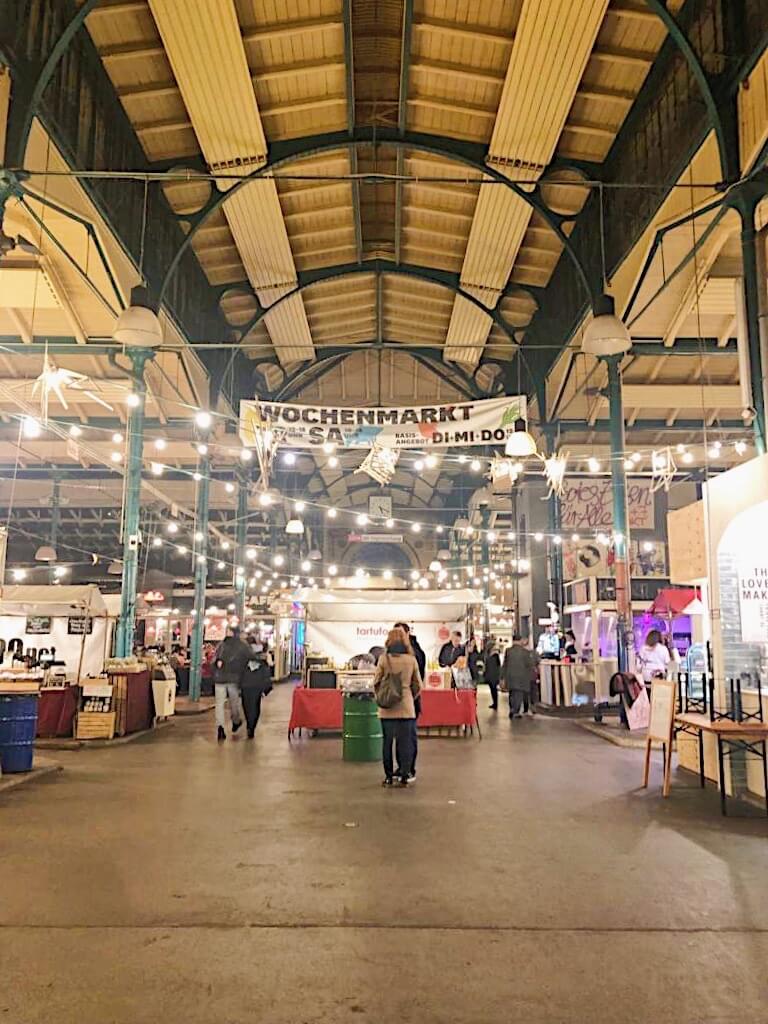 I would definitely recommend popping in and taking a look for a real feel of German life.

Have you been to Berlin? What things in Berlin would you recommend seeing?

Intersting in other European city breaks? Here are some suggestions for you!

A guide to 48 hours in Amsterdam

Best things to do in Ljubljana, Slovenia 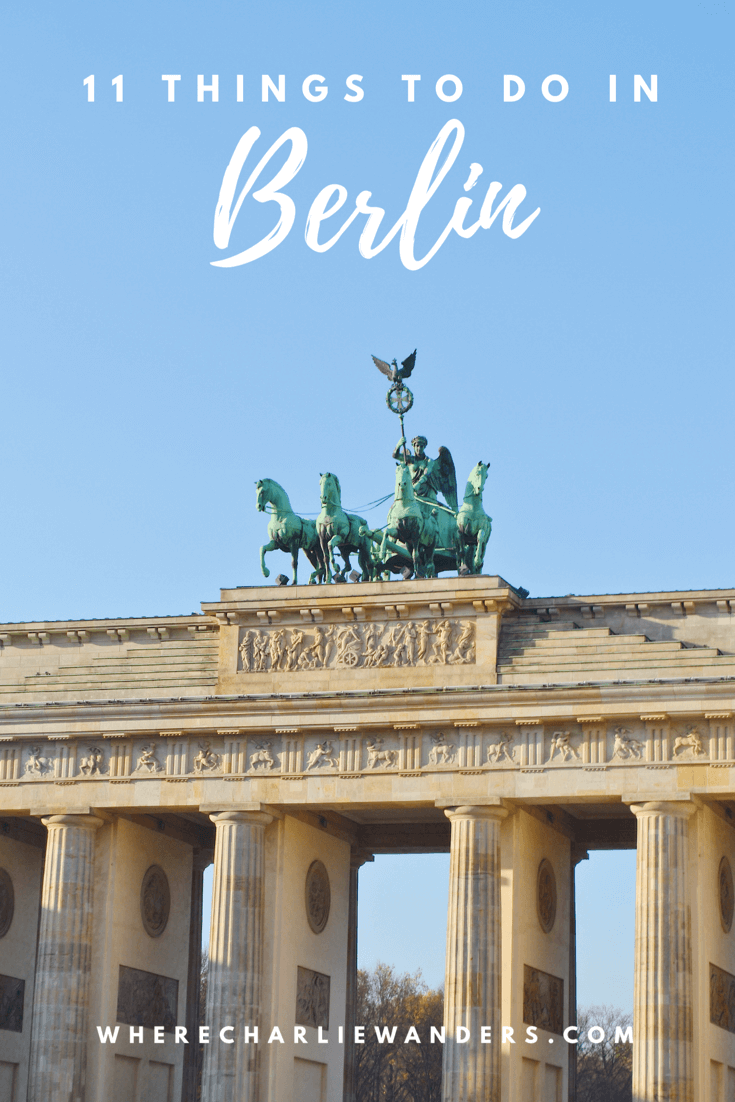 Castles in Norfolk, UK for an amazing visit

Amazing Castles in Scotland to Visit!

Church ruins in Norfolk to discover!

Best views in Venice to photograph

Things to do in Norfolk, UK

Ahh this brings back memories of my trip to Berlin last year. It was a lovely, varied city. Looks like you had better weather than we did – made it hard to see everything outside as rained all weekend. We discovered the games museum which was actually so fun, sometimes I’d glad things turn out differently as you get to do things you wouldn’t have expected to do. Great guide, thanks!
Melis // http://www.melisliving.com

I think we were definitely lucky with the weather! It was cold, but bright blue skies. That does sound like fun! I’d like to give that a try when I’m next there.

I have heard several people tell me Berlin has the best worldwide. I imagine even if it’s not beautiful as you say there must be so many interesting places to see. Thanks for the guide! Can’t wait to visit myself:)

I loved Berlin, especially the huge variety of street art all over the city. There are definitely things in this post that I missed so it looks like I’m just going to have to go back there and find them soon.

It’s such a fab city! And definitely somewhere tang I will keep going back to!

I think that’s it. It’s maybe not beautiful. But it has such a great vibe and it’s so cool!