Porto is the second largest city in Portugal, and often over looking in favour of Lisbon. I spontaneously booked flights to Porto to celebrate my birthday and instantly fell in love. I highly highly recommend for a city break! It is a romantic, quaint, riverside city and so full of charm! So, I wanted to share my to things to do in Porto.

This is the heart of Porto, and a UNESCO world heritage site. The buildings here were built very close together, so that they create shadows keeping things cool. It has created a maze of tiny, winding alleyways that are great fun to wander around. You can literally feel the history when you walk around, with the washing strung between the houses and men leaning out of the window. 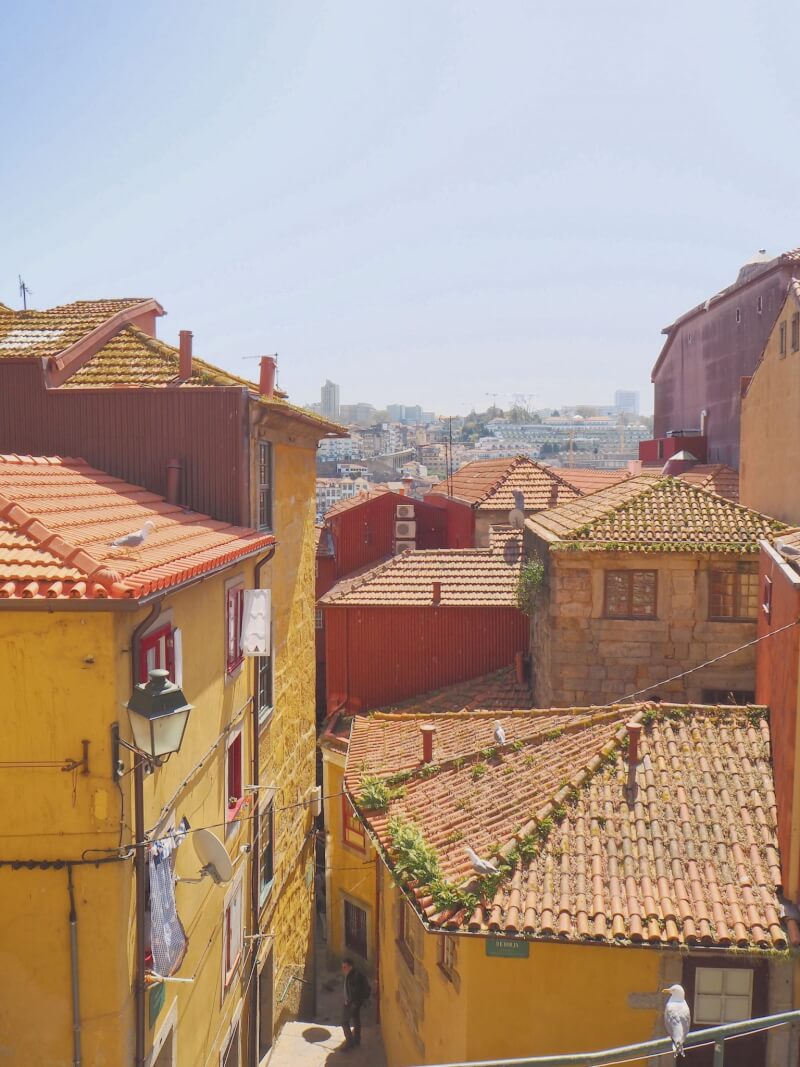 As a bonus you can even find the alleyway that is said have inspired Diagon Alley in Harry Potter! Definitely the best way to explore is to start at the top near Sé Cathedral and work your way down to the river. Much easier than walking back up. Trust me.

This part of the famous Riberia district, and definitely my favourite part to explore.

Of course this would appear on my things to do in Porto post. For me, it’s a must when I visit any city! It is the best way to get to know a place, to find out facts and see things from a local perspective. I highly highly recommend Porto Walkers free walking tour . 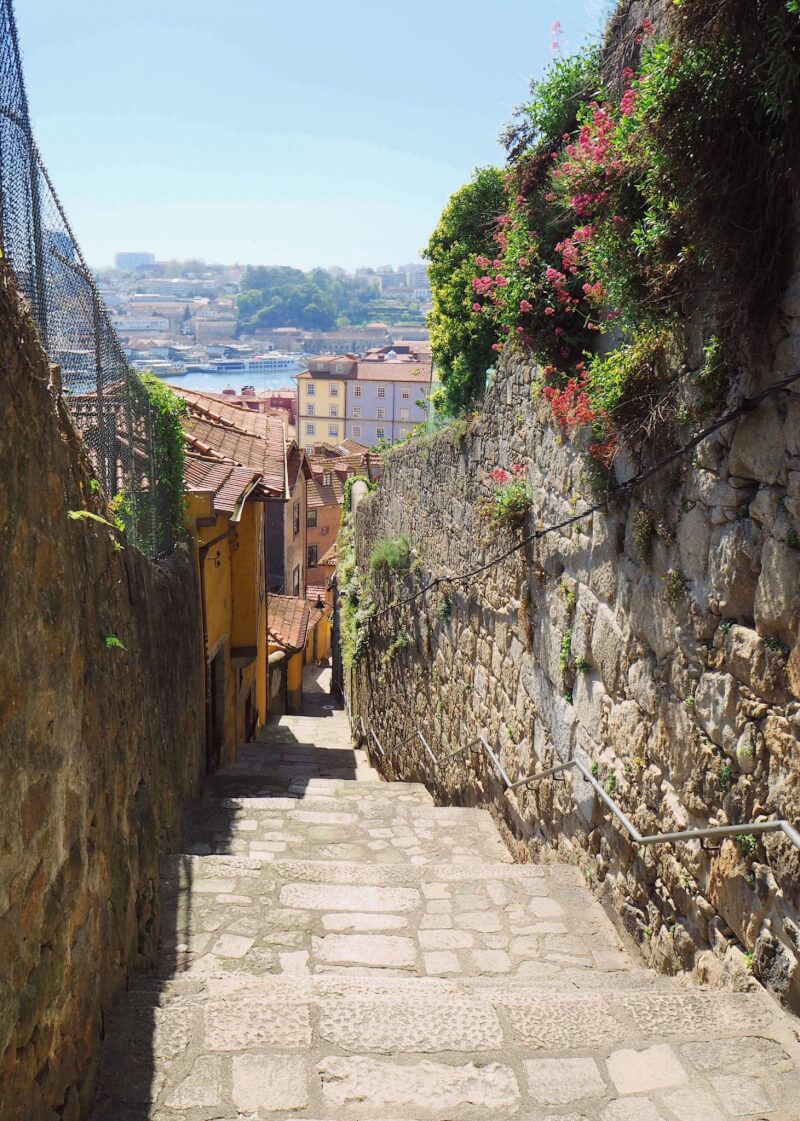 They meet very day at 10.45am at the statue of Pedro VI in the Praça da Liberdade square. Look out for the bright red Porto Walkers tops!

3. Visit the Church of Santa Clara

This hidden little church was pointed out to us on the walking tour. However, as it was a Sunday it was closed, so we came back the next day and I am so pleased we did! Located just inside the remains of the Fernandina Walls between the cathedral and the funicular. It was once the church connected to a convent, which is now being used as police offices. 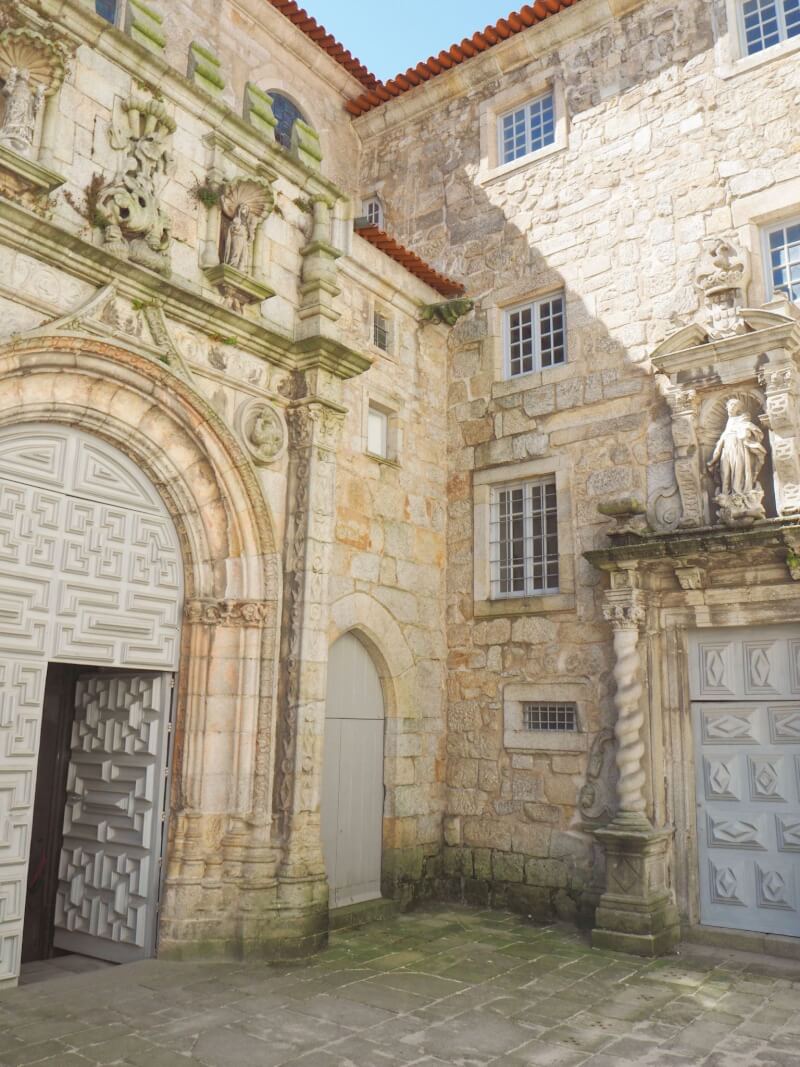 Inside it is beautifully decorated, with gilt gold and beautiful paintings. The gold was glued using egg, so the church is undergoing reservation, but it is definitely worth a peek. The lovely chap who manages it, is always on hand to talk through all the different beautiful features. Look out for the spikes – which kept the congregation away from the Nuns and the hatch through which they would sell tarts to the public.

This one is for the Harry Potter fans, as well as the book lovers among you! This library has long been voted as one of the most beautiful libraries in the world, and the staircase is said to have inspired JK Rowling during her time living in the city. 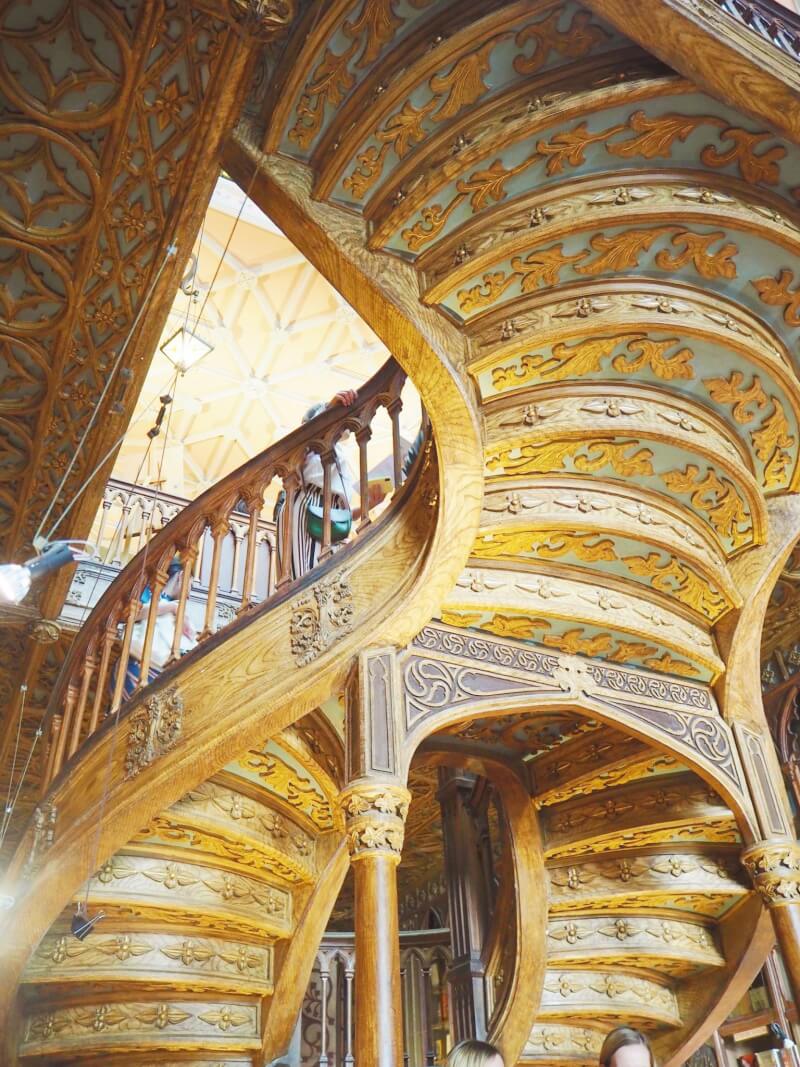 It does get incredibly busy, I was in the queue before the doors opened and within minutes it was rammed. A good tip is to go at the end of the day, when you might be able to get a clear shot just as the crowds are leaving.

This is a definite must when in Porto. Technically the wine houses are all across the river in the other city of vila Nova de Gaia. So, you basically get two cities for the price of one!  I spent a fantastic afternoon with the awesome Porto Walkers (again!). 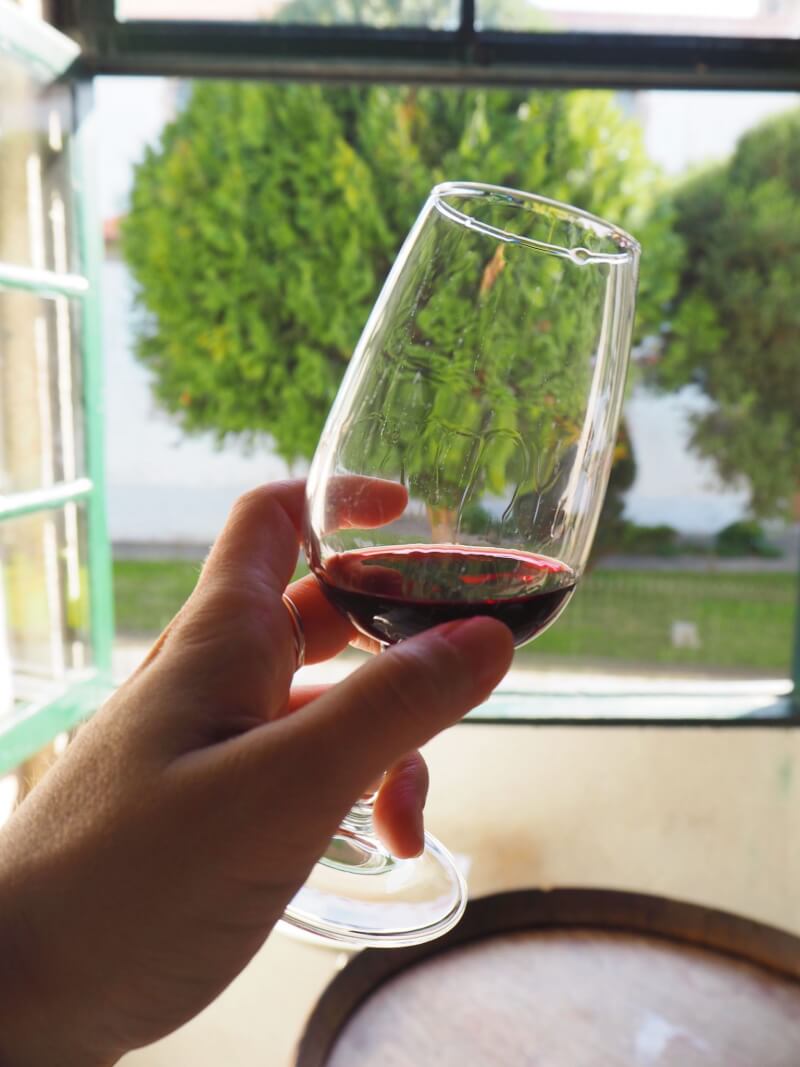 We visited three wine houses, and sampled 7 different ports. Along with some amazing expert guidance and inside knowledge. It is a great way to understand a bit more about the drink that made the city famous.

One of my favourite things to do when visiting a city, is to find the highest view point I can. This tower certainly offered that! Part of the Clérigos Church, the top of this tower offers amazing panoramic views across the entire city and out to the coast. 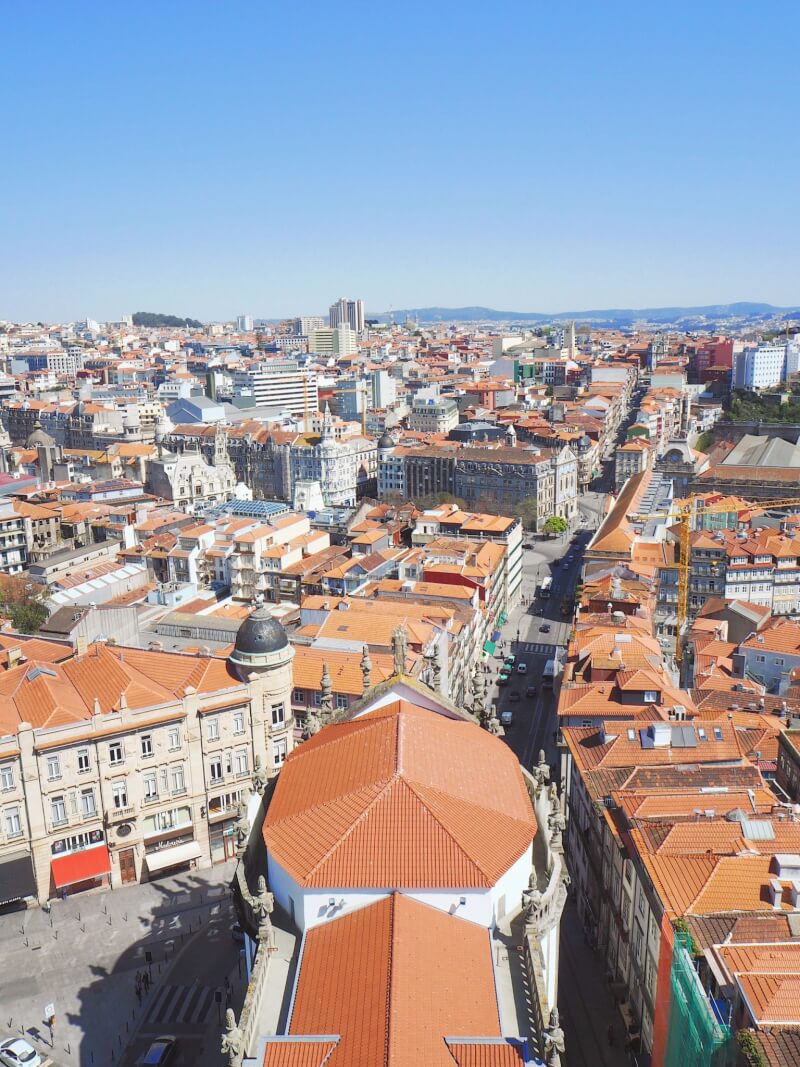 It is 230 steps to the top of the tower, but it is definitely worth it when you make it! Tickets cost €5 and include entry to the museum. Be aware though, the same stairs are used for up and down so there is some squeezing past people to be done!

Tiles, tiles everywhere. It is hard to miss the archetypal Porto blue Azulejo tiles, which are found all over the city. It became a running joke, if we walked past a couple of buildings without them. But, they are beautiful and really make the city stunning to wander around.  They ware mainly blue and white, as this was the fashion when they were introduced. But I also spotted yellow, green and red.

Another interesting fact about the architecture in  Porto. A lot of the houses in the old historic centre were rented, and the tenants were offered rent control, not just for life but for their descendants as well! As this was introduced way back, sometimes as early as the 20th Century, you can imagine the amount of rent these families are still paying! It meant it just wasn’t finically viable to keep the up keep of the property, which has lead to the crumbling and decaying buildings you see today.

Now tourism is starting to boom in Porto there are steps being made to renovate, and bring new life to these buildings. 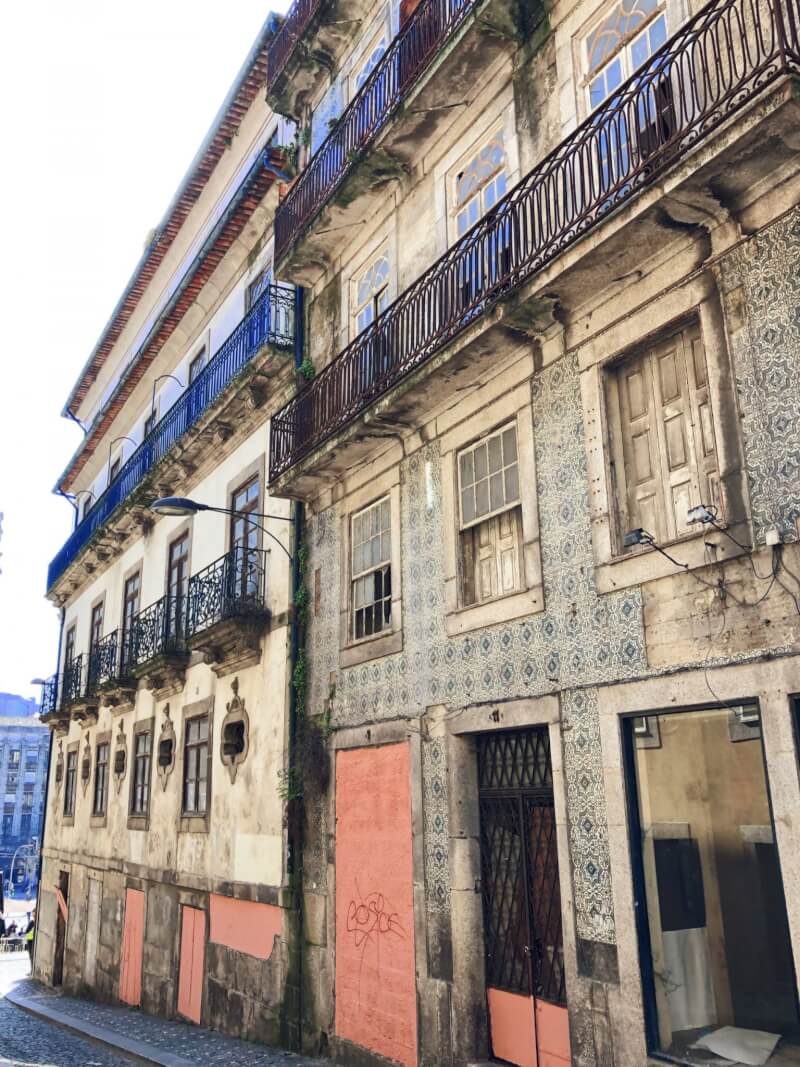 You cannot go to Porto and miss churches, it is impossible. However, there are two which I really loved.

Firstly, the Igreja do Carmo, on the corner of Praça de Carlos Alberta and Rua do Carmo. This church happily happened to be near our accommodation, so I got to walk past all the time! It was my first experience of the Azulejo tiles,  and I loved taking photos of the wall. It is also actually two churches right next each other. The Igreja do Carmo and the Igreja Dos Carmelitas, one for the monks and one for the nuns. Separated by a very narrow 1m house, so that the two churches wouldn’t have any sharing walls. Wouldn’t want those nuns and monks to mix.

Secondly the, Capela das Almas on the Rua de Santa Catarina. This one is actually famous for the blue tiles, so be prepared for some pretty pictures! It was given a makeover in the early 20th century which makes it so famous. Inside it is very Catholic church and interesting for a wander around. 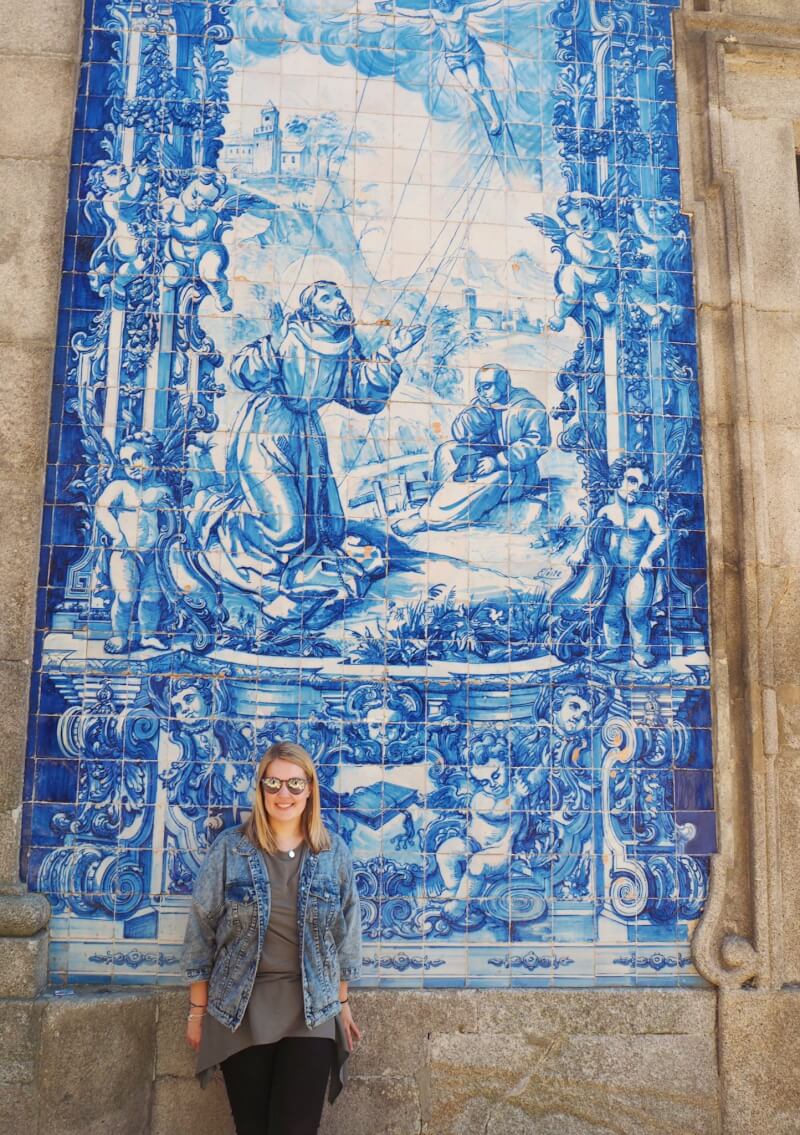 Seems like a weird thing to have on a list right? Especially as I am actually not a huge McDonald’s fan! However this one is a little bit special. Often called the most beautiful McDonald’s in the world. It was born in 1995, in a cafe previously known as Cafe Imperial. When McDonald’s bought the location they were told they could turn into a restaurant on the proviso they left some of the original features. 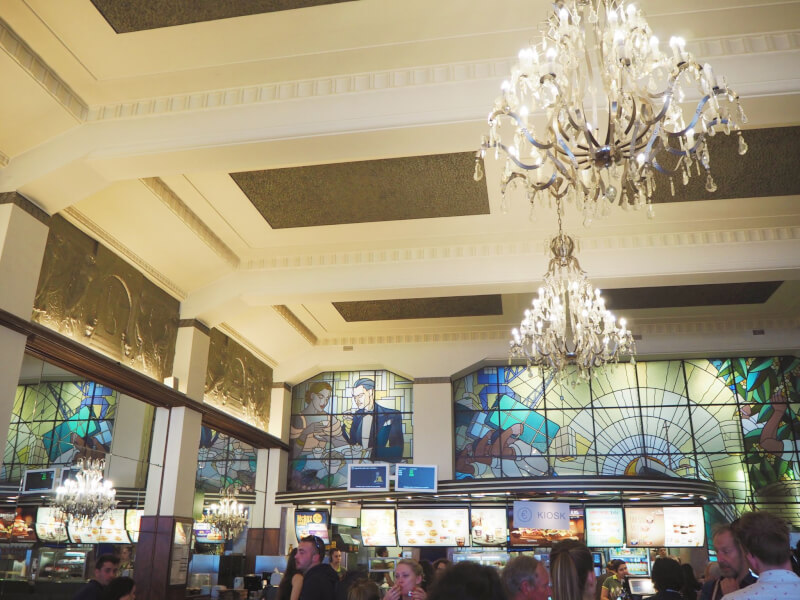 Cafe Imperial was known as one of the most impressive displays of Art Deco, and so McDonald’s kept it! Beautiful chandeliers, alongside beautiful artwork. And this is the only McDonald’s to share its name with another place, known as the ‘McDonald’s Imperial’. It’s a pretty unique place to visit!

10. Find the Half Rabbit

This is definitely one of the most incredible pieces of street art I have seen. Located over the river from Porto in the town of Vila Nova de Gaia, and created by the famous Bordalo II. He created the rabbit using trash and rubbish found on the streets. But leaves half of the piece unpainted, to show the natural colours of the material.

Street art lovers – this is not one to miss! And I love the message behind the artwork. 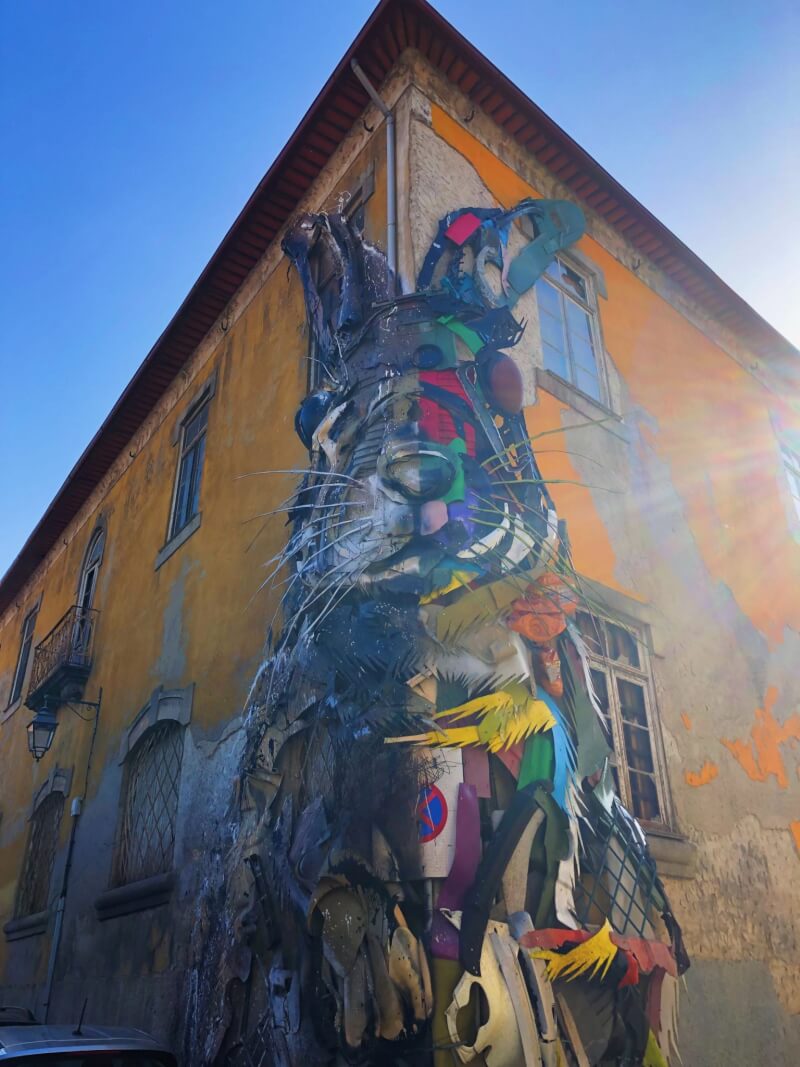 So good, I actually went twice! This is an incredibly popular place for brunch for both tourists and locals alike. We went first thing, as it was just opening, and didn’t have to queue. However, while we were eating the queues did build up.

I had eggs Benedict, because I am a sucker for it, but it had a very varied breakfast menu including lots of veggie and vegan options.

Located on Praça de Carlos Alberta, and if you sit outside you have a lovely view of the square. 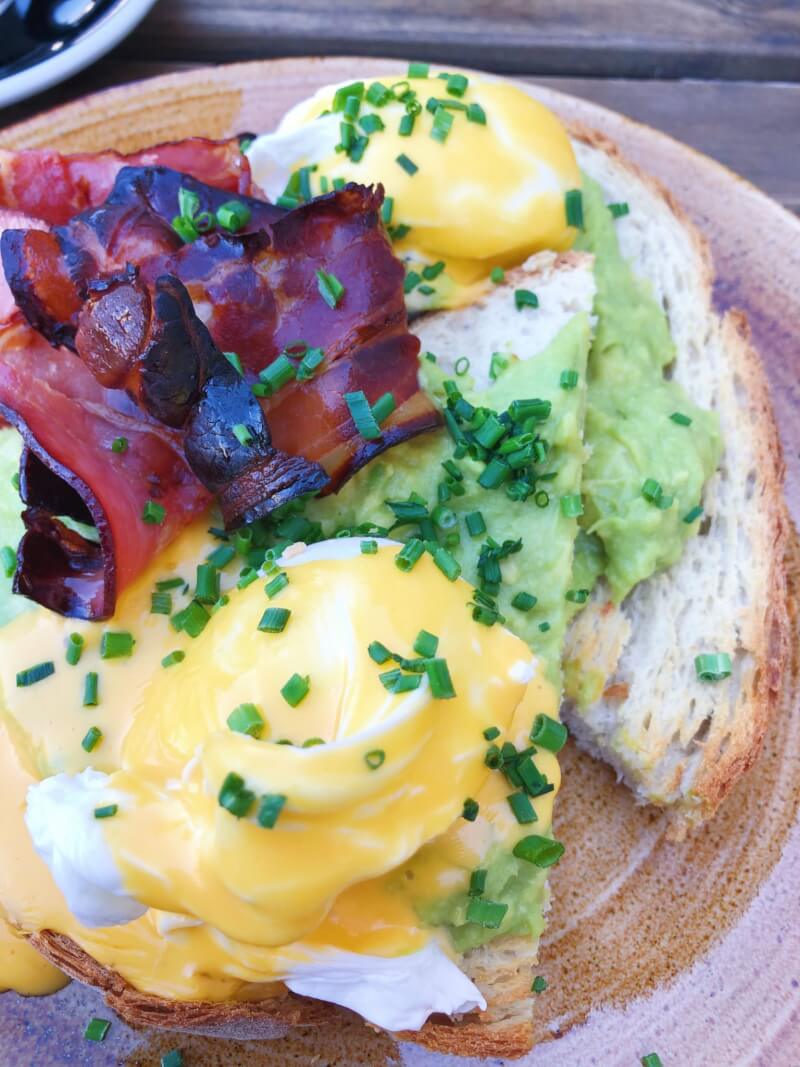 Definitely need spend sometime walking along the Douro river. I spent one beautiful evening on the Vila Nova De Gaia side, and enjoyed lunch on the Porto side. It is definitely more touristy on the Porto side, so expect to spend more on food and drinks. But it is a lovely spot to talk a walk, and view the boats. 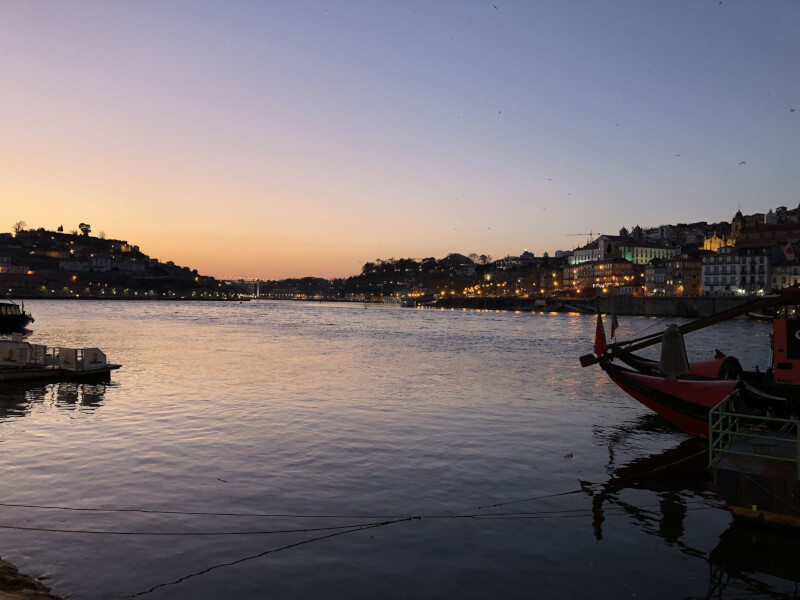 This is not just any train station! It is named after the Benedictine Monastary that once stood on this spot. To make way for the expansion of the city, it was deemed the religious orders would need to close down. However, rather than leaving the nuns without a place to live, they would be taken over when the last nun died. However, in the case of this train station, the last nun lived  58 years after this degree was introduced! She is said to now haunt the station!

Building work finally started in 1890 and was entrusted to architect José Marques da Silva. Look out for his signature on the building, which became his trade mark, like an artist signing his work. This was his first big commission, so he wanted to make it amazing. And what a building it is! Blue tiles adorn the walls telling the stories from Portugal. Very impressive building. 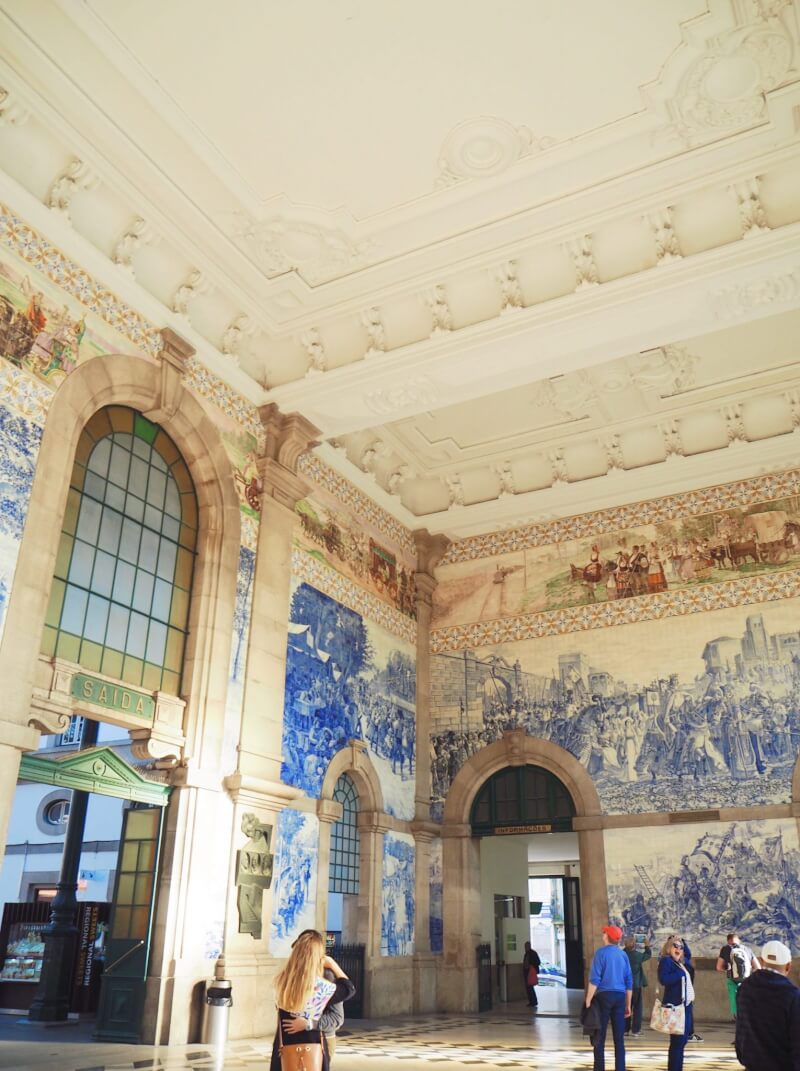 14. Walk over the Dom Luís Bridge

This bridge is often said to be the work of Eiffel, of Eiffel Tower fame, which is incorrect. It was actually designed by a student of Eiffel! As a pretty iconic symbol of Porto, it definitely needs to be seen to be believed.

I’d recommend walking one way on the top of the bridge and back the other way on the bottom! 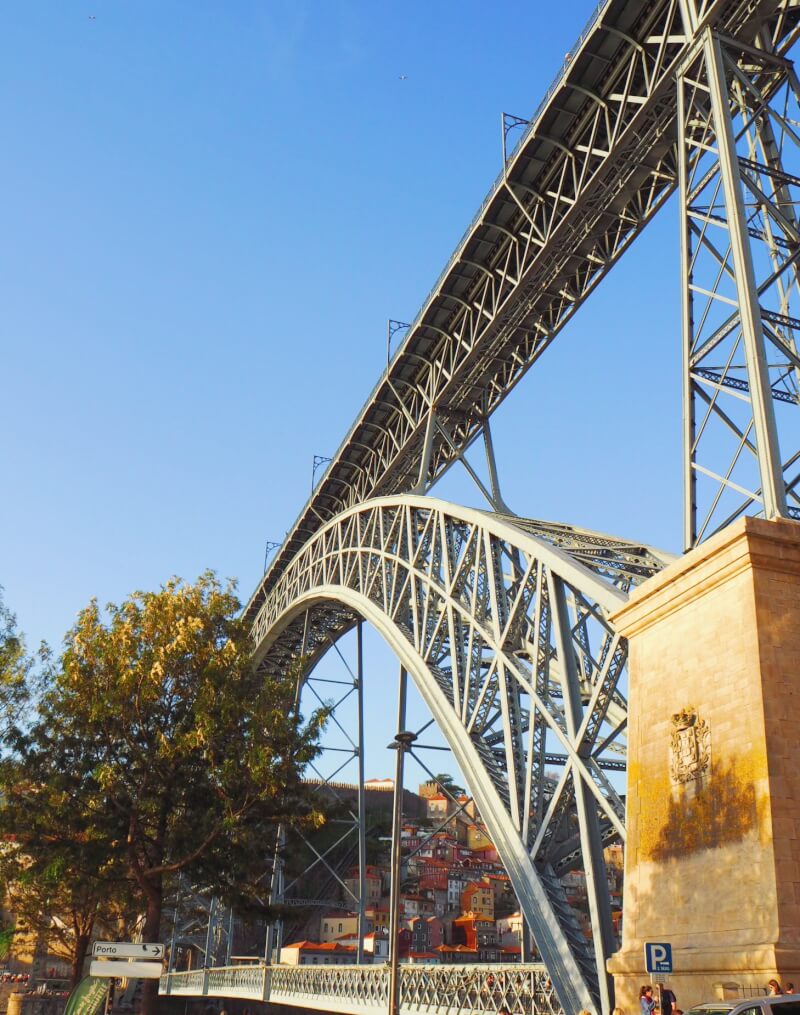 My top things to do in Porto!

Have you been? What was your favourite part of the city?

If you liked this post, please do pin it for later! 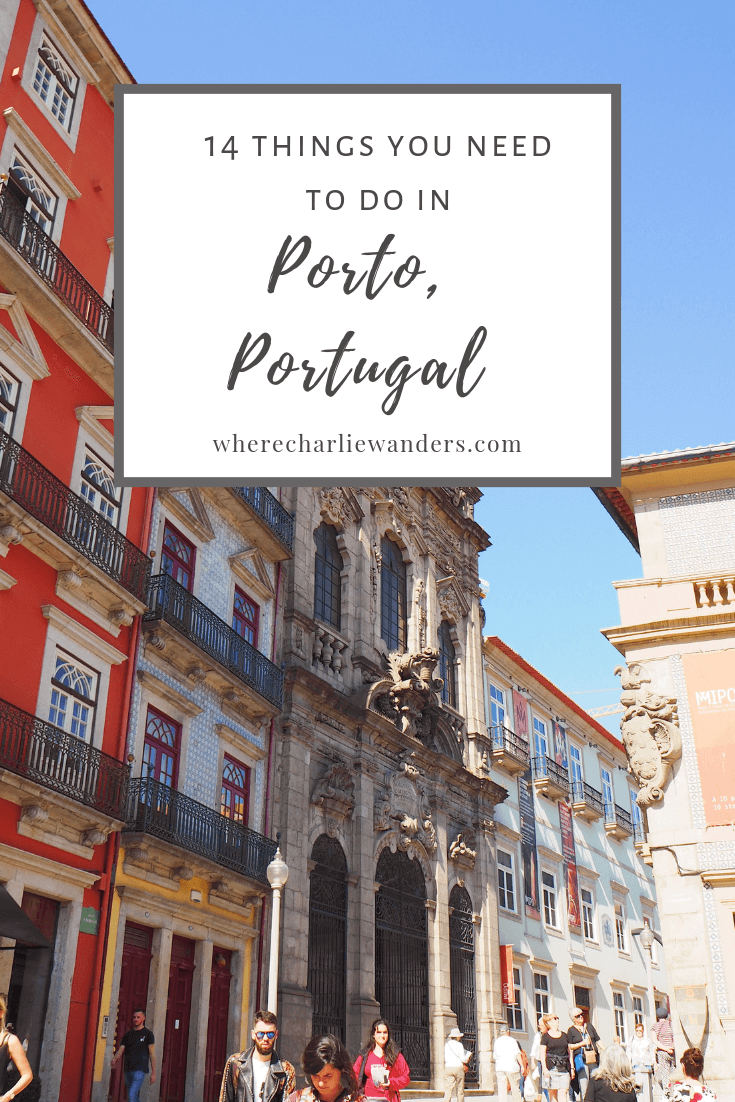 Best places to travel to in summer

Port looks a fabulous City Charlie. That staircase is amazing! You certainly managed to do a lot in your time there. I loved Portugal when I visited for the first time last year, so would love to see Porto.

It’s so amazing!! Such a great city break. We definitely squeezed a lot in!

Hi Charlie,
Great information and photos. How many days did you spend in Porto? We are heading there in April.

Thanks for the post and we will check out your recommendations.

Thanks so much! I went for a long weekend, so three days. It was a great amount of time. Although would have loved another couple of days to explore outside of the city a little bit! Shout if any q’s!